After Brussels rejection, TTIP fight could go to ECJ

Opponents of the EU-US free trade agreement are hoping to get their day in the European Court of Justice. Last week, the EU's executive body had rejected a citizens’ initiative to throw out the neoliberal pact. 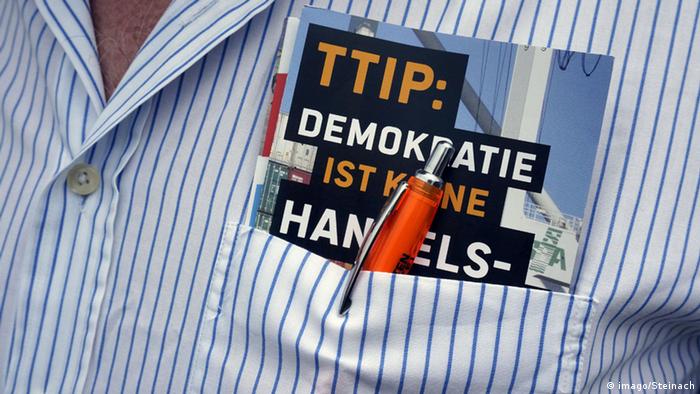 On Friday, the organizers of a citizens' initiative against the Transatlantic Trade and Investment Partnership (TTIP) petitioned the European Court of Justice (ECJ) in Luxembourg to hear their cause after the EU's executive body dismissed it last week. Opponents of the trade pact say that it would lower European environmental and consumer protections to US levels.

"The legal grounds on which the Commission based its rejection are false in our opinion," said Michael Efler, of the group Stop TTIP.

The European Commission had decided that Stop TTIP's objectives had exceeded the limits of what a citizens' initiative could accomplish. The group represents a total of 240 organizations which oppose the pact in more than 20 countries. Stop TTIP's members complain of a lack of transparency in the negotiation process to come to the agreement and also warn that it could allow corporations to influence government decisions.

For citizens' initiatives to reach the European Commission, they must have at least 1 million signatures. However, the Commission does not allow citizens to affect, alter or cancel laws or ordinances.

Germans also enjoy a healthy domestic skepticism over TTIP. In his role as federal economic affairs and energy minister, Social Democrats (SPD) boss Sigmar Gabriel has heard criticism from the left wing of his party and regional officials for his official support for the agreement, as a member of the governing coalition. Johanna Uekermann, the chairwoman of the SPD's youth organization, the Young Socialists, has called for a suspension of TTIP negotiations.

"The goals of the negotiations, and the negotiation results so far, must be made transparent and understandable for all citizens - and be reviewed very critically," Uekermann told the online edition of the German newspaper Handelsblatt on Friday.

Gabriel's former rival and current coalition ally German Chancellor Angela Merkel, however, has no plans to deviate from the pact.

"Free trade between the world's two largest economic zones, the United States of America and the European internal market, is of incalculable value," Merkel said on Friday in Berlin. "It is clear to me that the advantages greatly surpass the alleged disadvantages."

EU, US 'promising a miracle' with TTIP