Mali has been suspended from the African Union after Colonel Assimi Goita took power in a coup. The AU said the suspension would stay in place "until normal constitutional order has been restored." 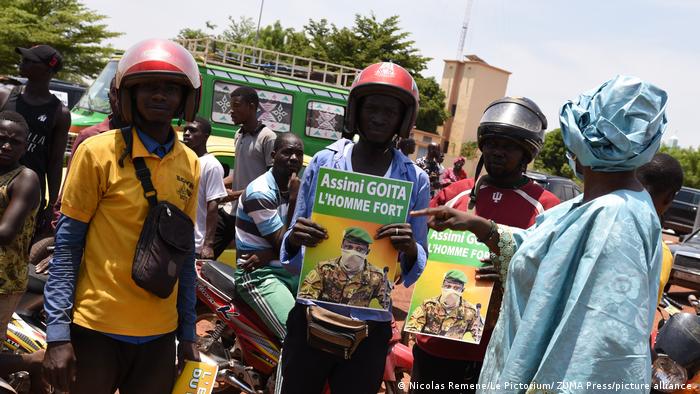 The African Union suspended the membership of the west African country of Mali late on Tuesday, days after the military detained the interim prime minister and president and took control.

The AU, following in the footsteps of the Economic Community of West African States (ECOWAS), also threatened Mali with sanctions if power is not returned to the civilian transitional government.

According to a decision by the Peace and Security Council, laid out in a statement published on Tuesday evening, the Republic of Mali is immediately barred from participating in African Union activities.

The statement from the union said that it was "deeply concerned about the evolving situation in Mali and its negative impact on the gains made thus far in the transition process in the country."

What did the African Union statement stipulate?

The members of the African Union backed the planned democratic transition, mediated by ECOWAS.

The statement called for a return to the transition, the release of all political stakeholders, including the detained interim President Bah Ndaw and interim Prime Minister Moctar Ouane who are under house arrest, and for authorities to respect the 18 months transition period original stipulated in the agreement.

Furthermore, the AU "strongly urges the Malian military to urgently and unconditionally return to the barracks, and to refrain from further interference in the political processes in Mali."

The statement goes on to call "for the creation of conducive conditions for an unimpeded, transparent and swift return to the civilian-led transition, based on the agreed transition roadmap for Mali."

If Mali fails to comply, the Peace and Security Council said it "will not hesitate to impose targeted sanctions and other punitive measures against any spoilers of the current transition."

What happened in Mali?

Colonel Goita sparked outrage last month after he had the transitional president and prime minister deposed and was subsequently named president by Mali's constitutional court.

Goita had assumed the chair of interim vice president after leading a coup in August last year that removed President Ibrahim Boubacar Keita.

Mali was subjected to sanctions from neighboring western African countries in the wake of the coup.

Following an agreement last October to lift sanctions imposed after the coup against Keita, the 15-member ECOWAS had said in a declaration that the vice president of the transition "cannot under any circumstances replace the president."

The AU suspended Mali and imposed sanctions following the August coup, but reinstated its membership after the civilian-led transitional government was announced.

The sanctions closed the borders for financial flows and commercial trade, but allowed basic necessities such as medicines and fuel to enter. Mali is one of the world's poorest countries.

An alleged coup attempt in the West African nation sheds light on the tensions facing the interim government of Colonel Assimi Goita. Yet, despite sanctions and isolation, Malians still back the military.