The fundamentalist group, which now rules Afghanistan, put the bodies on display to deter others. The move comes after a Taliban founder said executions and amputations will return. 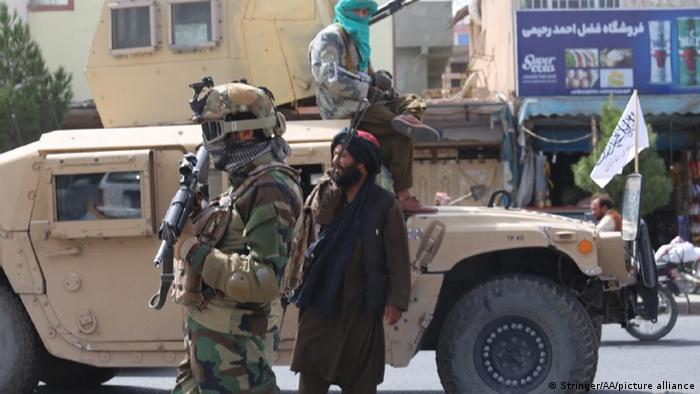 The Taliban hung up four bodies of alleged kidnappers on Saturday in the western city of Herat after they were killed in an exchange of gunfire, according to local officials.

"Their bodies were brought up to the main square and hung up in the city as a lesson for other kidnappers," Sher Ahmad Ammar, the deputy governor of Herat, said.

What happened in the kidnapping?

Ammar claims the men had kidnapped a local businessman and his son. The kidnapping was caught by police, who then opened fire on the kidnappers.

The businessman and his son were unharmed, according to Ammar.

Mohammad Nazir, a resident of Herat, was shopping when he heard a loudspeaker announcement calling residents to attention.

"When I stepped forward, I saw they had brought a body in a pickup truck, then they hung it up on a crane," Nazir told Reuters news agency.

A note was pinned to the man's chest with the phrase: "This is the punishment for kidnapping." Photos of the hangings circulated widely on social media.

The hangings come after one of the founders of the Taliban said gruesome punishments would return to Afghanistan.

The group previously had engaged in cruel executions and punishments when they last controlled Afghanistan from 1996 to 2001. Sometimes the executions took place in front of large crowds in a stadium.

"Everyone criticized us for the punishments in the stadium, but we have never said anything about their laws and their punishments," Taliban leader Mullah Nooruddin Turabi told the AP news agency on Friday. "No one will tell us what our laws should be. We will follow Islam and we will make our laws on the Quran."

The Taliban took control of Afghanistan on August 15, as the US military and NATO allies were pulling out forces from the country. Human rights observers are concerned that the group will roll back advancements in women's rights and impose a strict version of Islamic law on residents.