The pilot, three crew members and five members of the Afghan special forces died in the crash. Afghanistan has been suffering a wave of deadly violence in recent months. 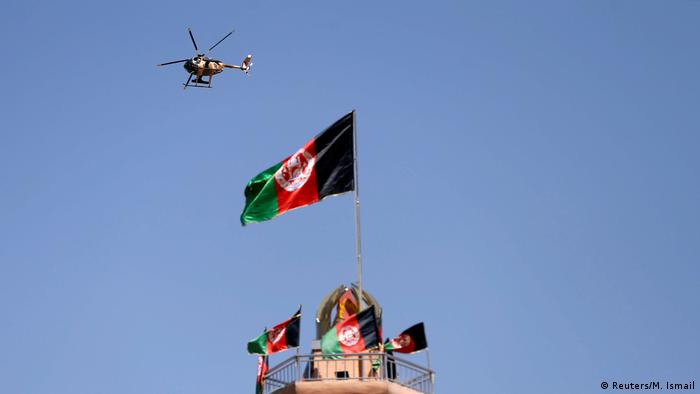 The helicopter crashed in the Maidan Wardak province near Kabul

Nine members of the Afghan security forces were killed on Wednesday evening when their helicopter crashed near the capital Kabul, the country's defense minister said on Thursday.

In a separate incident on Thursday, four state employees were killed when a bomb destroyed the minibus they were traveling on, Kabul police chief Ferdaws Faramarz said.

A similar attack on a minibus on Monday left a 3-year-old child dead and wounded 13 others.

What happened in the helicopter crash?

A source in the Afghan air force told Reuters that the helicopter had been hit by a rocket while taking off.

The pilot, three members of the crew and five special forces died when the Mi-17 helicopter crashed in the Behsud district of Maidan Wardak, Afghan television network Tolo News reported.

Four helicopters had been transporting munition and food, as well as special forces, to Behsud, a source told Tolo News.

The defense ministry announced that it was investigating the cause of the crash.

Destroyed Bamiyan Buddha statues come back to life in Afghanistan

The Afghan government and Taliban militants, with US support, have been carrying out talks in the hope of reaching a peace deal after decades of violent conflict.

In the past year, violence in the country has increased with militants targeting soldiers, government officials and citizens alike. Some have seen the rise in violence as the Taliban trying to increase its leverage in the talks.

However, other militant groups, such as Islamic State, are also active in the country and have claimed responsibility for deadly attacks, such as the storming of Kabul university last November which left scores of students dead.

In line with the preliminary deal agreed by the US before talks between the Afghan government and the Taliban began in Doha, the US will withdraw its troops from the country by May 1.

US President Joe Biden cast doubt on this as a possibility, saying that the removal of the remaining 2,500 US troops would be "tough." The Taliban warned that there would be "consequences" if the US failed to uphold its end of the agreement.