After a sluggish and much-criticized start, German military flights out of Kabul are picking up pace. Over 900 have now arrived in Germany, with some describing scenes of heartbreak and chaos back in Afghanistan. 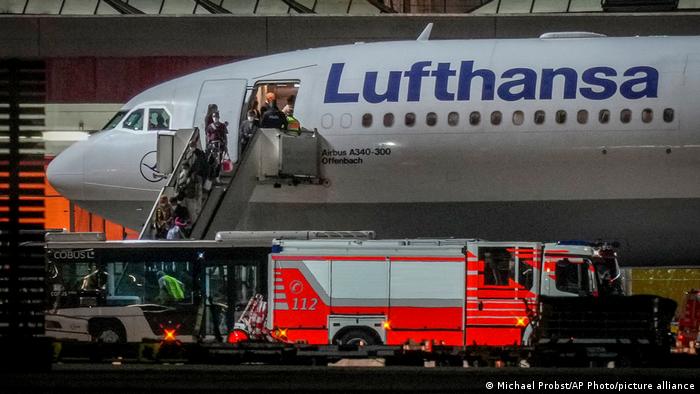 The German military has ramped up evacuation efforts and has managed to help hundreds of people escape the dire situation in Kabul, Afghanistan.

Those who have been lucky enough to make it out of Kabul have described harrowing scenes.

An unnamed evacuee told waiting media: "Its getting worse every day. I couldn't do anything for my family. What shall I do? I could only save us, I can't save my family."

A visibly distraught woman said: "If you grow up in safety, you cannot imagine what happens there, with the small children, it was so horrible. Crowds of people trampling over each other"

Another unnamed passenger said simply: "The world must help the Afghan people."

Germany will help for as long as it can

Germany's Defense Ministry said it has managed to get 900 people to safety so far.
Those who have been flown out of Kabul include German citizens, local security personnel and others deemed to be at risk.

Berlin has allocated €40 million ($47 million) along with a troop contingent of around 600 soldiers.

While German military officials say they will help evacuation efforts for as long as they are able to, some lawmakers have cautioned that not everyone might be able to be flown out.

Johann Wadephul, a German lawmaker with Chancellor Angela Merkel's Christian Democratic Union (CDU) said that those who have assisted the government and the military would be taken out of harm's way, but he said he could not give guarantees.

"I would like to underline that we don't only bring the Germans out of this country, but also Afghans and friends from other countries who helped us, who are our allies," he told DW.

"So we are doing everything to save as much as many lives as possible. But of course, the guarantee for everybody is not possible," Wadephul added.

On Monday,Chancellor Merkel said Germany was expecting to evacuate as many as 10,000 people from Afghanistan.

The European Union said while it has managed to evacuate 106 staff members of EU delegations along with their families, hundreds more remain behind.

"There are still 300 more Afghani staff of European Union delegations blocked on the streets of Kabul trying to reach the airport and trying to have a seat on some of the European Union member state flights,'' he said.

The staff loyally served the bloc, he said, adding that it was the EU's "moral duty to protect them and to have to save as many people as possible."

The first evacuees touched down in Madrid on Thursday. Borrell said that those who do manage to get out of Kabul will be relocated among the EU's 27 member states.