Diplomats from the United Kingdom have met with the Taliban government in Kabul. The talks were held as the militant group was accused of committing "extrajudicial executions." 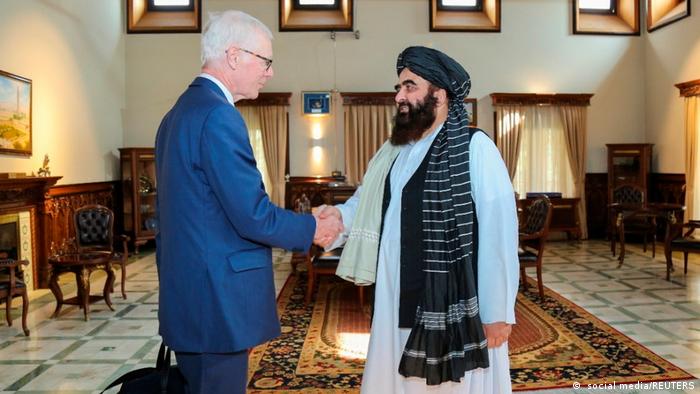 The first talks between diplomatic officials from the United Kingdom and the Taliban took place in Kabul on Tuesday.

The UK Foreign Office said special envoy to Afghanistan Simon Gass and the British Embassy's Martin Longden met with the Taliban leaders to discuss the support Afghanistan needed as it battled a humanitarian crisis.

Talks centered around the spiraling humanitarian crisis and issues of security and terrorism. Safe passage for UK and Afghan nationals along with the rights of women were also addressed.

Longden tweeted a picture of the meeting and said: "It's early days, and unsurprisingly, there are points of difference between us. But such difficult challenges lie ahead for Afghanistan and (and beyond)."

Taliban Foreign Ministry spokesperson Abdul Qahar Balkhi said there was a move from the militant group to seek "constructive relations" and said the meeting "focused on detailed discussions about reviving diplomatic relations between both countries."

Afghanistan is facing a deteriorating humanitarian crisis which is being worsened by a struggling economy. Billions in assets have been frozen since the Taliban came to power in August, and foreign aid payments have also dried up.

The Taliban are moving to foster diplomatic ties in the hope of freeing up resources.

Western states have been considering how to go about dealing with Afghanistan's new government and have determined conditions that should be met in order for relations to progress. Among those conditions — the new government must be inclusive and respect the rights of women and minorities.

As the UK seeks to establish some kind of working relationship with the Taliban, rights group Amnesty International has accused Taliban fighters of executing more than a dozen surrendering ethnic Hazaras.

According to the report, 11 of those killed had been members of Afghanistan's security forces.

These latest allegations follow similar reports of summary killings — those without judicial process — since the Taliban seized control of the country.

Among the many who have tried to leave Afghanistan, in the wake of the Taliban takeover, are former security personnel who fear reprisal killings.