Afghanistan: Anger over US 9/11 compensation declaration

Afghans have protested a US decision to use Afghanistan's assets to compensate the families of 9/11 victims. A total of $7 billion will be split between relief for Afghans and payments to 9/11 victims. 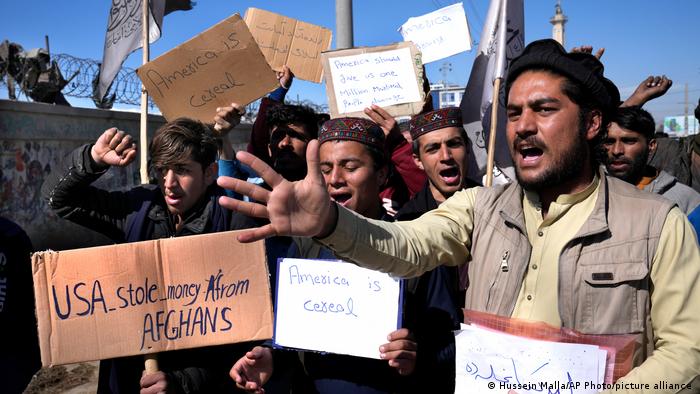 Afghan protesters expressed anger on Saturday following the US decision to use $7 billion (€6.15 billion) in Afghan assets for humanitarian aid and compensation payments to families of 9/11 victims.

US President Joe Biden on Friday signed an executive order to free up $7 billion of Afghan central bank assets held in the US.

The Afghanistan Bank (DAB) has labeled the US move an "injustice" and said the money belongs to the people of Afghanistan.

"DAB considers the latest decision of USA on blocking FX (foreign exchange) reserves and allocating them to irrelevant purposes, injustice to the people of Afghanistan," the bank said in a statement.

Demonstrators gathered outside Kabul's Eid Gah mosque and demanded that the US provide financial compensation for tens of thousands of people killed in two decades of war in Afghanistan.

"What about our Afghan people, who gave many sacrifices and thousands of losses of lives?'' civil society activist Abdul Rahman asked.

Others who were part of the demonstration accused the US of stealing the money from Afghans.

Afghanistan has been sliding toward economic collapse since the Taliban seized power in August. Nearly 80% of the country's national budget came from foreign sources, which were shut off when Kabul fell.

Friday's decision has not sat well with the Taliban, who have been trying to garner recognition from the global community.

"The theft and seizure of money owed by the United States to the Afghan people represents the lowest level of human and moral decay of a country and a nation," the group's senior spokesperson, Mohammad Naeem Wardak, posted on Twitter.

Assets 'belong to the people of Afghanistan'

Torek Farhadi, who was financial adviser to the former government in Afghanistan, questioned Friday's decision and said it was not Washington's decision to make.

"These reserves belong to the people of Afghanistan, not the Taliban. ... Biden's decision is one-sided and does not match with international law," Farhadi said. "No other country on Earth makes such confiscation decisions about another country's reserves."

In addition to holdings in the United States, Afghanistan also has an additional $2 billion in reserves. Most of that is held in countries including Germany, Switzerland, the UAE and the UK.

Children at risk of starvation in Afghanistan