A court in Afghanistan has reversed the death sentences of four people who were convicted of participating in a mob that killed a Kabul woman. Farkhunda Malikzada was brutally beaten and killed by a mob in March. 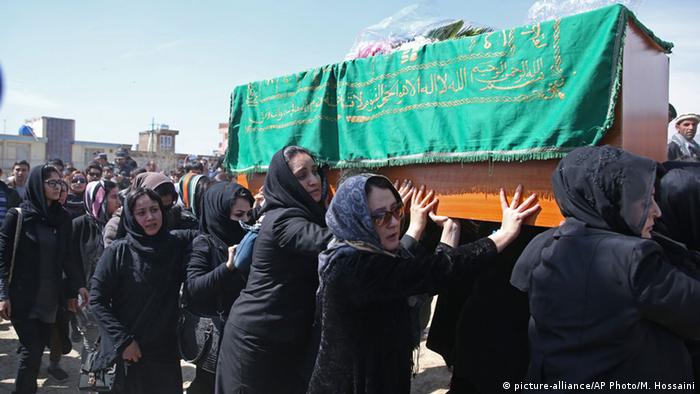 An Afghan court on Thursday dismissed death sentences awarded to four men who were charged with participating in a mob that lynched and murdered the 27-year-old woman for allegedly setting a copy of the Koran on fire.

"The appeal court decided to reduce the sentence - three of them got 20 years in prison and one 10 years," Judge Nasir Murid told AFP news agency.

The appeals court in Kabul held its session behind closed doors and Afghan news channel Tolo TV was the first to receive information about the decision.

"We just heard through [the] media that the appeal court in a secret session has reversed the decision. They didn't inform us. Whatever the decision is, we will not accept it," Farkhunda's brother Mujibullah told journalists.

"This is against the constitution. The courts should be open to the public, and this closed-door hearing undermines the credibility of the sentences," politician and lawyer Shukria Barakzai told journalists.

A victim of mob brutality

Farkhunda Malikzada was killed in March after a peddler at the Shah-Du Shamshira shrine in Kabul falsely accused her of burning the Koran. Policemen standing nearby allegedly did nothing as the crowd punched, kicked and beat her with wooden planks. They then threw her from a roof and ran her over with a car. Her body was then set alight on the banks of the Kabul River.

The lynching was filmed by people in the crowd and shared widely on social media. Nearly 50 people, including 19 policemen were accused of participating in the mob and ignoring their duty.

In May, a Kabul court sentenced the four men to death and handed 16-year prison terms to eight others. Eleven policemen were sentenced to one in year in jail. Hearing on the case, which shocked women and human rights activists in Afghanistan and the world, went on for three days and was broadcast live on Afghan television.

A court in Kabul has begun listening to witnesses' accounts of a woman who was stoned to death by a mob in March this year. The Kabul resident was falsely accused of burning the Quran. (02.05.2015)