A court in Kabul has begun listening to witnesses' accounts of a woman who was stoned to death by a mob in March this year. The Kabul resident was falsely accused of burning the Koran. 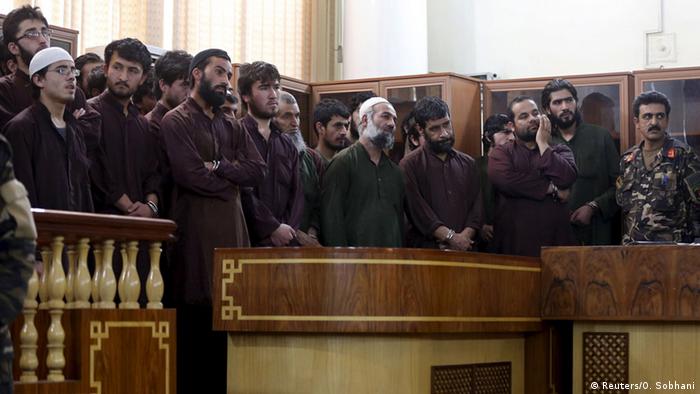 Judges in Afghanistan's capital Kabul began hearing the case of 27-year-old Fakhrunda, who was killed on March 19 by a mob. Fakhrunda was falsely accused of burning a copy of the Koran.

The trial was broadcast live on Afghan television. Lawyers questioned 49 people (pictured above), including 19 policemen who were linked to the killing. A prosecutor read out charges against 10 of the defendants. The policemen were accused of neglecting their duties and failing to prevent the attack and some were even suspected of participating in the assault.

Other accused persons faced charges of assault, murder, incitement to violence and failure to prevent the woman's death.

Fakhrunda's attackers had accused her of burning the Muslim holy book, but her parents fought the charge, saying she was a religious student at a seminary. After the event on March 19, a cell phone video made its rounds on social media, showing the 27-year-old being beaten, run over by a car and being burned before her body was thrown into the Kabul river.

The incident sparked outrage among Afghans, prompting civil society activists to question the power of clerics and demanding better laws for women.

The case was being seen as a test for Afghan's justice system, which has been criticized for being biased against women. The attack against Fakhrunda is an example of the low status accorded to women in Afghan society.