The debate on whether "dating coach" Julien Blanc should be banned from holding seminars has reached Germany. His crime? Sexist "pickup" methods, his critics say. But Blanc and his group could still perform in Germany. 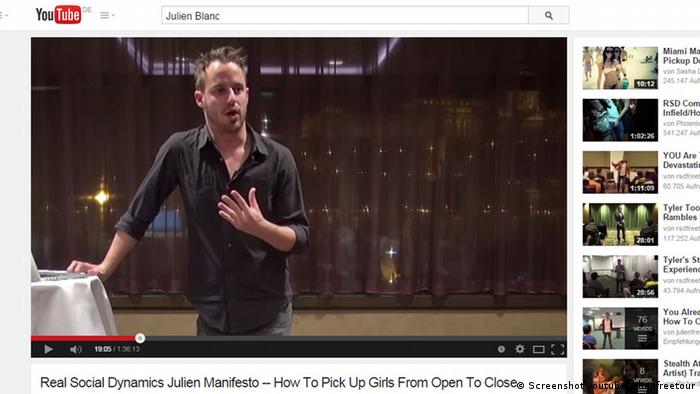 There have been several campaigns to impose a travel ban on notorious pickup artist Julien Blanc in many countries. They began after Blanc was captured forcing women into his crotch area in Japan.

"If you're a white male [in Japan], you can do what you want," he says in the video. "Just grab her ..., and I pull her in. And she kinda like laughs and giggles, and all you have to say to kinda like take the pressure off is just yell 'Pikachu' or 'Pokemon' or 'Tamagotchi' or something."

Critics see Blanc as a cruel purveyor of the dating game - encouraging men to use abusive means to get women to sleep with them.

Blanc recently admitted to being "the most hated man in the world" in an interview with CNN.

"I teach guys how to gain confidence in order to socialize with women, and perhaps get into a relationship with the woman," he said while admitting that sex is the goal of his campaign.

On Twitter, Blanc used the hashtag #HowToMakeHerStay with an image - originally intended by a domestic abuse charity as a way for women to identify when they are being mistreated - to encourage threats, emotional abuse and intimidation towards women. And he also used the hashtag #ChokingWomenAroundtheWorld. Blanc's Twitter account recently became "protected," meaning his tweets can only be seen by the people he follows.

And now, thousands of people have signed petitions in Australia, Germany, South Korea, Japan, Canada, the UK and Brazil to ban Blanc and his seminars.

Earlier this month, Australia revoked Blanc's visa on November 6 after a change.org petition, which said he encouraged "violence and emotional abuse against women," was signed by thousands of people.

"This guy wasn't putting forward political ideas. He was putting forward abuse that was derogatory to women and those are values abhorred in this country," Australia's Immigration Minister Scott Morrison told Sky News.

On November 19, Julien Blanc was banned from entering Britain by the UK Home Office.

In Germany, 150,000 signatures have been collected by the 'No Rape Promo' petition in an effort to ban Blanc's entry into the country. 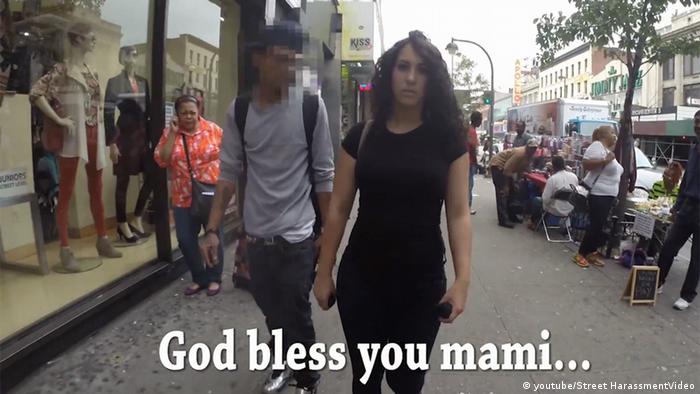 Dietrich, a member of Munich's city council, wants a travel ban on Blanc and his group who are planning to hold a workshop in Munich in December.

Despite this, it is highly unlikely that a travel ban on Julien Blanc can be secured in Germany because his events do not present a danger of violence to the public despite his message, according to a press spokesperson with the Green Party in Munich. He believes that the seminar scheduled for December will take place at a secret location in Munich with another pickup artist from Blanc's dating coach group, Real Social Dynamics (RSD).

A few followers of Blanc support him and defend his teachings which his critics say promote a "rape culture."

"The vastly overwhelming majority of responses have of course been anti-Julien. Sadly however, whilst they are in an incomparable minority, there is a constant stream of support for Julien and RSD in general," Mike Burke, creator of the Take down Julien Blanc Facebook page, told DW.

"Some of the responses are frankly disturbingly misogynistic, while others try to dismiss this as some sort of feminist movement," he adds.

Throughout all of this, critics against a ban on Julien Blanc have said it would go against freedom of speech.

There is even a petition on change.org.

"Denying him a visa would be an incredible injustice to a man who has committed no crimes!" the petition says.

Standing up to everyday sexism

Laura was sick and tired of rude comments and inappropriate groping on crowded buses, so the young Londoner started sending a clear message to other women: You don't have to tolerate everyday sexism. (26.08.2014)