Acclaimed German journalist killed in Afghanistan | Asia| An in-depth look at news from across the continent | DW | 04.04.2014

The renowned German photojournalist Anja Niedringhaus has been shot dead in Afghanistan, just a day before the presidential elections in the war-torn country. Her Canadian colleague, Kathy Gannon, was seriously injured. 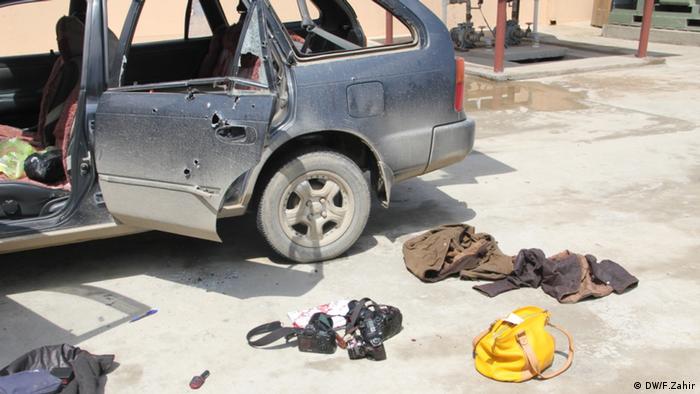 The attack took place on April 4 inside a heavily guarded district compound in the eastern province of Khost, according to police spokesperson Mobarez Mohammad Zadran. A man dressed in a police uniform opened fire on the two Associated Press journalists seated in the back of a car. The offender has been reportedly arrested and is currently being interrogated. The car in which the two women were travelling belonged to a convoy of election workers delivering ballots to polling stations, Abdul Wahed Pathan, the province's deputy governor, told DW.

By the assassin's own admission, he wanted to take revenge for an attack carried out by international forces a year ago in the district Ghorband in Parwan, the attacker's home province. The deputy governor, however, said he believed this was not an isolated act of revenge and that the extremist Haqqani terror network was behind the attack. 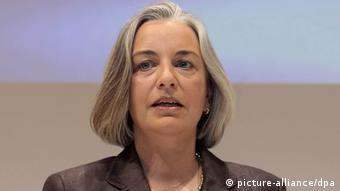 Niedringhaus was an internationally acclaimed photographer

Arifullah, the Afghan interpreter for the two foreign journalists, told DW he knew the women very well and that they were aware of the precarious security situation in the country.

"We wanted to visit the district of Tanai today to photograph the preparations for the election," he said.

"When we reached a police base, I got out of the car and suddenly heard gun shots. When I turned around, I saw the women bleeding," Arifullah recounted. The interpreter had previously accompanied the journalists to other provinces such as Helmand and Paktia.

The renowned Afghan journalist and founder of the oldest journalists' association in the country, Fahim Dashty, told DW that the work performed by journalists in Afghanistan had always been dangerous, especially as they were often confronted with perilous situations and had no protection. "They are an easy target, so they must constantly be on their guard," said Dashty.

Tauhidi Seddiqullah, a member of the Afghan NAI Media Watch organization confirmed this: "The closer we get to Election Day, the more dangerous it becomes for journalists."

Since the beginning of 2014, three Afghan and two foreign reporters have been killed. Seddiqullah points out that the Taliban don't want journalists to report on the vote. "This is why they threaten and target them." 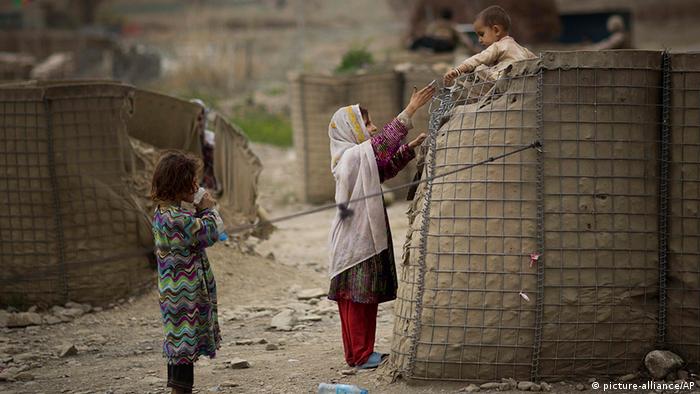 Niedringhaus took this picture one day before she was killed

'A huge loss for Afghanistan'

Jan Kubis, head of the United Nations Assistance Mission in Afghanistan (UNAMA), condemned the assault. "I am outraged by this terror attack on civilians," he said. "The journalists were going about their work, informing the world about how Afghan citizens are exercising their right to shape a better future for themselves, their children and their country, he said, referring to the incident as "a huge loss for Afghanistan."

The UNAMA chief added that both journalists were highly respected and very well known for their professionalism, love and appreciation of the Afghan people and dedication to telling Afghanistan's story.

German journalist Thomas Wiegold, who specializes in the field of security policy, added that Niedringhaus showed the German public what the war in Afghanistan meant for civilians and German soldiers alike. 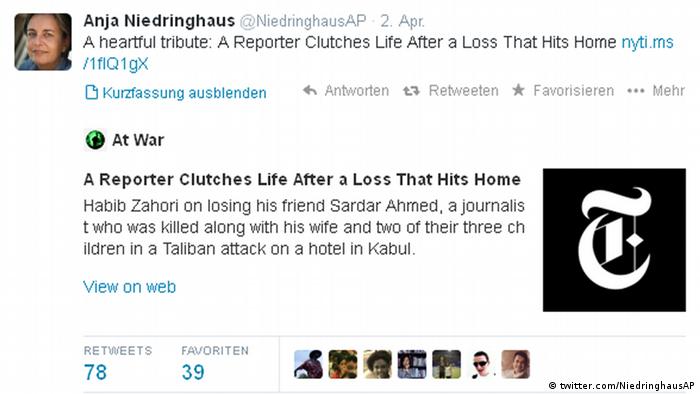 "Many Germans probably don't know her name, but they've seen her pictures. She didn't capture just an anonymous war in her photos, but rather, the people who were forced to come to terms with it. This will be missed."

Niedringhaus was an internationally acclaimed war photographer who covered several conflict zones from Iraq to the Balkans. She had traveled to Afghanistan numerous times since the 2001 US-led invasion. As part of an AP team she won the 2005 Pulitzer Prize in breaking news photography for the coverage of the Iraq war.

Some 12 years ago, Hamid Karzai was seen as a bearer of hope for Afghanistan. But the politician is now seen as an erratic president who alienated his allies. He is leaving office, however, with a set of achievements. (04.04.2014)

Thousands of Afghan refugees living in Pakistan won't be able to cast their votes in their country's presidential election due to inadequate polling arrangements. Will it have an impact on the outcome of the poll? (03.04.2014)