A spotlight on the Pakistani military′s corruption | Asia| An in-depth look at news from across the continent | DW | 22.04.2016

A spotlight on the Pakistani military's corruption

Pakistan's army has sacked six military officers over allegations of corruption. But analysts say it's a political move aimed at increasing pressure on PM Sharif, who's trying to come clean in a Panama Papers' scandal. 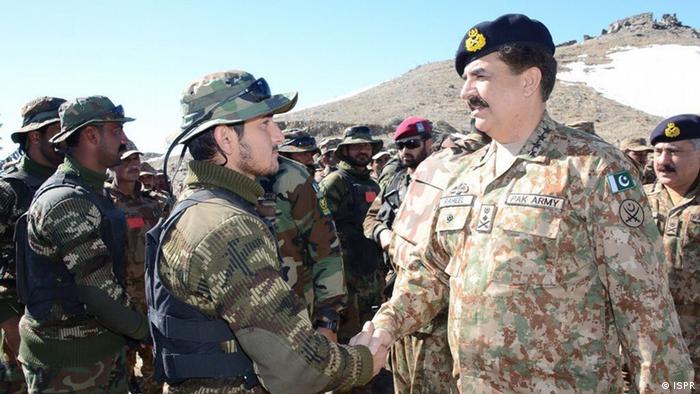 In the local media, Pakistan's army chief Raheel Sharif is being hailed as a "leader" who wants to eradicate corruption in the South Asian country. Last week, the general insisted that the battle against terrorism and corruption must go hand in hand. On Thursday, April 21, General Sharif dismissed six military officers, including two high-ranking generals, over allegations of corruption, thus proving that he is committed to his stance on financial irregularities.

It is an unprecedented move in the Islamic country, which was directly ruled by the military for a total of 35 years after the nation's independence. And the military still has the final say in matters related to defense, security and foreign policies.

The dismissal of army officers – who are not being tried for corruption, but have only been sent into early retirement – comes at a time when the civilian politicians are facing huge criticism over their own monetary corruption.

Army and opposition up pressure on PM Nawaz Sharif

Prime Minister Nawaz Sharif is facing one of the biggest political challenges of his tenure. The leaked Panama documents mentioned his family's ownership of offshore companies. Though the PM and his son deny any wrongdoing, there is a huge uproar in Pakistan, with opposition parties demanding his resignation, claiming the premier evaded taxes through these firms. On April 5, Sharif addressed the nation on television and announced that he was forming a judicial commission to investigate the allegations.

Now, after the removal of army officers in corruption cases, PM Sharif is under more pressure to come out clean in the Panama Papers' scandal.

"The army chief's decision to dismiss some high-ranking officers is an extraordinary step. It is a clear signal to politicians and other state institutions that they also need to put their house in order," Talat Masood, a former army general and defense analyst, told DW.

"Raheel Sharif has proven that he won't tolerate corruption. There is a bigger moral pressure on the politicians now," the analyst added.

The public opinion is rapidly turning against the premier, who, according to experts, needs to do something very quickly to thwart the crisis. At the same time, General Sharif is once again being hailed by many Pakistanis as a "messiah," who put the country on the path of prosperity.

But critics of the army say that the dismissal of six army officers cannot sufficiently address the issue of military's massive financial corruption, which usually goes unnoticed. The Pakistani military keeps a lion's share of the country's budget and is not answerable to the civilian government over its expenditures, they say. Rights activists also assert that the fact that the army chief removed officers over corruption charges is proof that the military is not a "holy cow" as many in the country would like to believe. 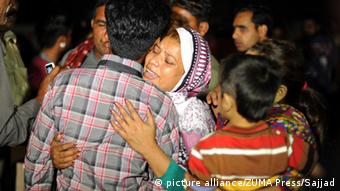 Pakistan is facing an uphill battle against home-grown terrorism

"The corruption in the Pakistani military is as rampant as in any other state institution," Arif Jamal, a US-based Islamism and security analyst, told DW. "The army is involved in the smuggling of oil and narcotics through the borders of the western Balochistan province. The military also makes money through its checkpoints in the restive province. All drivers have to bribe the officers to pass through these posts. These are just a few examples," Jamal added.

Farooq Tariq, a leader of the socialist Awami Workers Party, claims the military's financial corruption goes beyond Balochistan: "The Pakistani army is involved in all spheres of the economy. It is running businesses all across the country, from marriage halls to factories, and from banks and insurance companies to dairy farms. Does the constitution allow this? Isn't it corruption as well," questioned Tariq.

"We must not forget that while people are celebrating General Sharif's 'resolve against corruption,' his army is cracking down on poor farmers in the Punjab's Okara region, trying to dispose them of their lands. Hundreds of cases have been registered against the military officers, yet the civilian administration has no authority to even interrogate them," Tariq said.

According to Tauseef Ahmed, an Islamabad-based political analyst, the military's financial corruption is no secret, but it is impossible for the civilian government to take action against army officers.

"Some time ago, Senator Farhatullah Babar told the Senate about 20 companies that are being run by the army. The Supreme Court passed a judgment against the army-administered Defense Housing Authority for encroaching lands across the country," Ahmed told DW. "In Karachi, the military-run Faziya housing scheme pumped millions of rupees into advertisements, prompting people to invest in housing. Later, the people lost all their money as it turned out that the land only existed on papers," Ahmed added.

The activists also decry the Pakistani military's alleged lack of respect for the rule of law. Last month, former military dictator, Pervez Musharraf, who is facing multiple charges in Pakistani courts, was allowed to leave the country to seek medical treatment abroad. Considering the nature of the cases against Musharraf, it should not have been that easy for him to exit Pakistan. The former general is accused of treason, and involvement in the 2007 assassination of former Prime Minister Benazir Bhutto.

Analysts say it all comes down to the fact that Musharraf was a former military chief, and it was just a matter of time before he would be sent abroad. 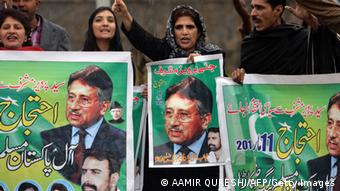 "The military does not want to set a precedent where its officers are held accountable by the civilians," Usman Qazi, an Islamabad-based UN adviser, told DW.

"How can General Raheel Sharif talk about accountability of politicians when his own institution supported Musharraf whole-heartedly, facilitating his way out of the country?" Ahmed underlined.

Analyst Jamal finds a silver-lining for the politicians in the whole situation.

"The good thing about the dismissal of the army officers is that General Sharif's decision establishes that there is a lot of corruption in the Pakistani military," he said, adding that for the sake of transparency, the Pakistani military must give official details about each officer who were sacked.

"The punishments like dismissal from service or premature retirement with all privileges for proven corruption are too little and too late. For similar crimes, the politicians have been sent to jail. Former President Asif Ali Zardari spent many years behind bars for the alleged crimes that the military could never prove."