A sign of peace: The iconic anti-war symbol 60 years on

Few symbols are as powerful, or universal, as the peace sign. But why was it created? And why has it remained increasingly relevant to this day?

On a rainy day during Easter in 1958, thousands of demonstrators gathered in London's Trafalgar Square to march to the Aldermaston Nuclear Research Center some 80 kilometers away.

The march was supported by the Campaign for Nuclear Disarmament in Britain, which was co-founded by philosopher and Nobel literature laureate Bertrand Russell, a committed pacifist who helped pioneer an anti-nuclear movement that spread globally and continues to this day.

Several hundreds of the protesters that day held large round signs with a previously unknown sign in their hands: A circle with a straight line running down the middle and two lines running diagonally to the right and left. It was the birth of the peace sign, which has since become an iconic symbol of a worldwide movement opposed to war and nuclear proliferation.

When the British graphic artist Gerald Holtom was commissioned in 1958 to design a logo for the "Campaign for Nuclear Disarmament," he was likely unaware that his creation would become a universal symbol for pacifists, nuclear opponents, conservationists and civil rights activists.

Six years earlier, Britain had risen to become the third nuclear power after the United States and the Soviet Union, and had now successfully tested a hydrogen bomb. The nuclear disarmament movement in the UK was growing and a slogan was already in place: "Ban the Bomb." 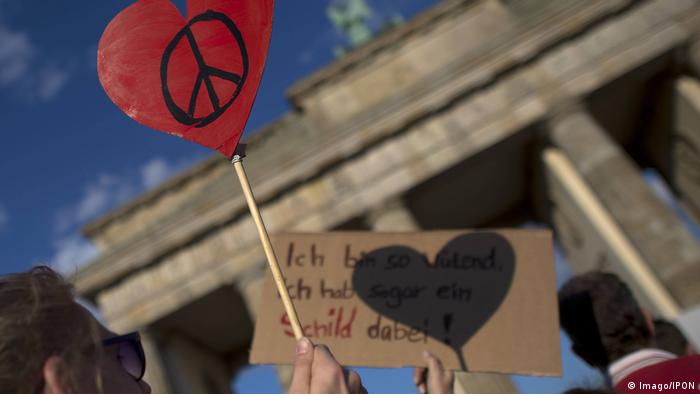 But a uniform visual trademark with high recognition value was missing. Campaign leader Bertrand Russell wanted to change that and asked Holtom, a graduate of the Royal College of Arts in London, to draft a logo. Ironically, he would go on to use military sign language to create a succinct new symbol for peace.

During the Second World War, Holtom, himself a peace activist, learned navy flag signal codes, and incorporated the semaphores for the letter "N" (two diagonal lines) and "D" (a straight line) into his nuclear disarmament symbol. Meanwhile, the circle around the lines symbolized the world. Despite its military origins, the anti-nuclear movement quickly embraced the new logo.

The anti-nuclear symbol was soon appropriated as a more general symbol of peace that spread across the globe. A close associate of Martin Luther King, Bayard Rustin, who had attended the first Easter March, likely brought the peace sign to the US where it established itself as a symbol of the civil rights movement.

Soon after, it became the symbol of the anti-war movement and the hippie generation that was galvanized through its opposition to the Vietnam War. 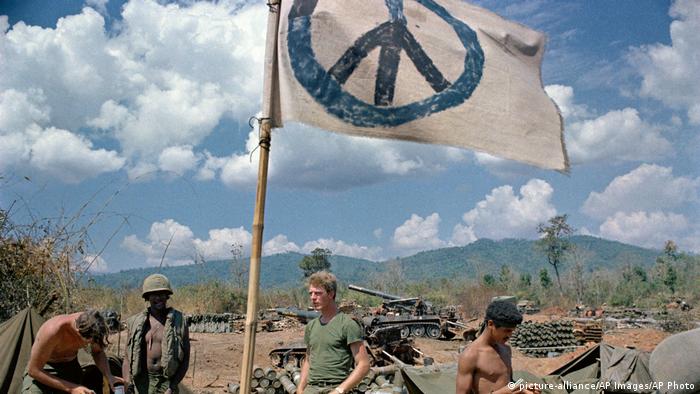 Even American soldiers appropriated the peace sign during the Vietnam War

Meanwhile, opponents of the South African apartheid regime painted the peace symbol on their banner; and in the new millennium it was used to protest the US invasion of Iraq.

Sixty years after the peace symbol was first conceived, and as war in the middle east rages on without end, the significance of the universal anti-war symbol has not been lost.

Look through the picture gallery above to explore the evolution and ongoing relevance of the peace sign.

Anti-war monument on show in Berlin

Passers-by couldn't help but pause at Berlin's Brandenburg Gate after three buses rose up directly in front of the German capital's iconic landmark. This weekend is the last chance to see it. (13.11.2017)

A political solution to Syria's conflict may require "new ideas" to move peace talks forward, the UN's top mediator said. For seven years the conflict has shown no sign of ending despite several attempts at peace. (14.12.2017)

Originally designed to show resistance against the nuclear threat in the late 1950s, the peace sign quickly became the common symbol against violence, hatred and oppression. (21.02.2018)