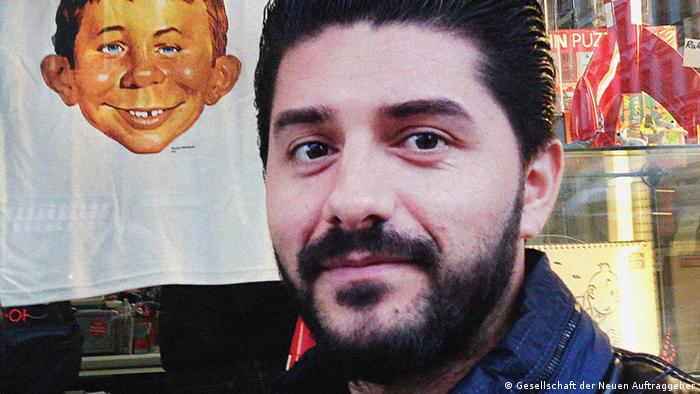 Sartep Namiq's story begins in his Iraqi-Kurdish homeland. When the living conditions there became unbearable due to drought which made trees die and lakes dry up, his exodus began. Sartep joined the stream of refugees and new arrivals who ended up in Berlin after a dangerous and adventurous journey.

Namiq's story is told through the illustrated graphic novel, Temple of Refuge. It's named after his first home in Berlin: Tempelhof Airport — a former airport built by the Nazi regime, which was transformed into a temporary refugee shelter. Yet in the book, instead of looking bleak, it is a comfortable place to live, a valuable shelter where dreams of a better future come true for its residents. "Of course, this is a modern fairy tale," Sartep Namiq told DW. "But why not dream of a place where everyone has the same opportunities, whether they are rich or poor?"

Illustrator Felix Mertikat created the book's images. With angular, minimal strokes, its panels set the scene for the Sartep's journey, illustrating the departure of the overcrowded rubber dinghy from a Mediterranean beach in North Africa, and refugees wandering through the streets of Rome, before continuing on a long journey in winter through southeastern Europe. Finally, the traveler come face-to-face with the concrete walls of "Fortress Europe," which are guarded by hooded, heavily armed police officers. Soon, they escort Sartep and his companions in white buses to the refugee camp on Tempelhofer Feld.

The story's images are powerful, as they must be, because the graphic novel does not include words. It was the speechlessness of the refugee camp's residents that gave Sartep and his friends the idea of doing a graphic novel four years ago. They were helped in their goal by the German chapter of the New Patrons organization. 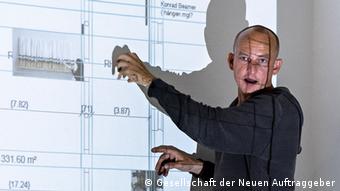 The comic will be released in early March in a hardcover edition of 5,000 copies by Egmont comic publishing company in Berlin. Alongside famous cartoon characters like Donald Duck, Lucky Luke and Asterix, Sartep, the hero of the Temple of Refuge is in good company.

Additional heroes of this endeavor are the New Patrons (Neue Auftraggeber in German), a network of people who want to make a difference by helping to commission works of art. "Why is it still the case in democratic societies that only one percent of the population has the opportunity to be patrons of new cultural commodities?" asks Alexander Koch, director of the German chapter of the New Patrons. The movement, which Koch calls a "democratization initiative," began in France. 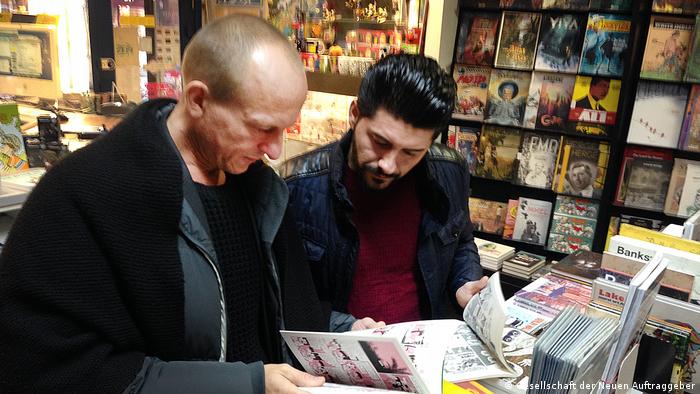 The story is based on the experiences of Namiq (right) who traveled from northern Iraq to Berlin, but then takes a unique turn

But are artists better equipped to solve problems? "Art can create awareness about problems," says Koch, who is himself involved in the art scene, ″by doing something that couldn't have been imagined before."

That's exactly what happens in the Temple of Refuge. In the story, an implanted chip gives the hero Sartep magical powers. With it, he can make the wishes and dreams of the inhabitants of Tempelhof come true. The walls of Fortress Europe begin to crack, plants grow. A new, ecological city emerges, in which newcomers and established Berliners live together peacefully. The comic creates a utopian life and society. 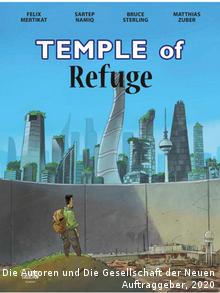 Anyone can read 'Temple of Refuge,' since it relies on images to tell the story

Like Sartep, anyone can apply to have their project funded. Mediators of the New Patrons group help bring a project to life — most initiatives revolve around communication and strengthening communities. For example, the New Patrons of Mönchengladbach, in northern Germany, are commissioning an urban garden for an unemployment center that reflects on the city's social roots.

The organization's values are reflected in the commissioning of Temple of Refuge, which is funded by the Institute for Foreign Cultural Relations (IfA), the German Foreign Office and the Fondation de France.

The hardcover edition will be published by Egmont publishing company in March and cost €10 ($12). The proceeds will be donated to the Sea-Watch association, which rescues refugees in distress in the Mediterranean Sea.

The New Patrons plan to give away another 10,000 copies of a softcover version to German schools, refugee centers and refugee initiatives in the Arab world. "If just one person reads this story, it will have been worth it," says Sartep.