A ray of hope amidst chaos in Caracas | Americas| North and South American news impacting on Europe | DW | 05.06.2017

A ray of hope amidst chaos in Caracas

Young people in Venezuela have founded a relief organization in Caracas. Their aim is to offer a beacon of hope to youths living in the most dangerous parts of the city. Tobias Käufer reports from the Venezuelan capital. 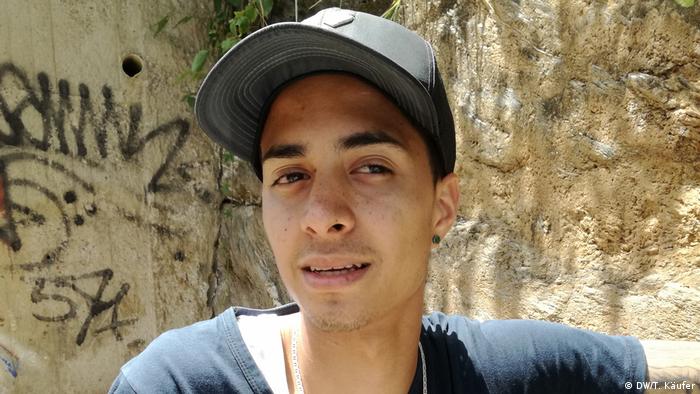 In the midday heat, the blue paint dries in no time at all. The boys from the district called "Bloque 23 de Enero" can hardly wait to get onto the freshly-painted basketball court. But 21-year-old Jesus Delgado urges them to be patient. "Just wait a few more minutes and then you can play," the young Venezuelan tells the kids. Delgado and his co-worker from the NGO "Caracas mi convive" ("Caracas, my partner") first want to attach a new basketball net to the neglected hoop. Working together with the organization's founder, Leandro Buzon, they put a ladder up against the backboard and Delgado hangs the net. "Finished," he says, as the neighbors clap. It's a small victory amid the current chaos in Venezuela.

Delgado was born and raised in this neighborhood, which for many is one of the most dangerous districts of Caracas. "Bloque 23 de Enero" is also a stronghold of the "Chavistas," supporters of the late revolutionary leader, Hugo Chavez, and his successor Nicolas Maduro, the current Venezuelan president. "This neighborhood is my life," Delgado tells DW. This is where Chavez started his political triumph almost two decades ago. And it is here, of all places, where a grassroots opposition movement is gaining support. And with the area having been so hard-hit by the Venezuelan crisis, Delgado wants to bring about change. "There are no organizations, no state-run institutions, that are taking care of kids and youths. That is why we want to do something to improve living conditions," he says. 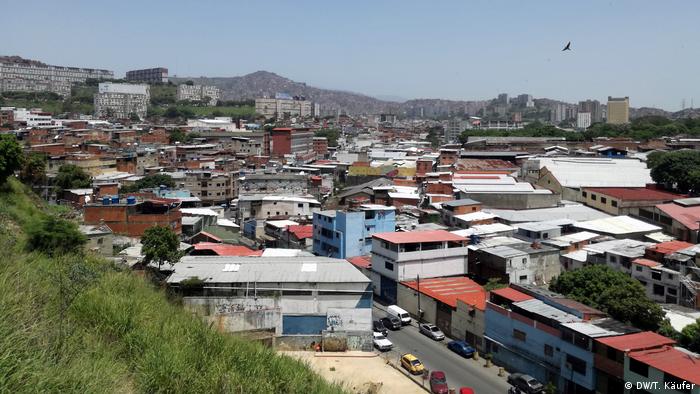 'Bloque 23 de Enero' is a traditional 'Chavista' stronghold, but 'Caracas mi convive' is closer to the opposition

And one way of doing this is through sport-focused initiatives, like refurbishing a run-down basketball court, football pitch or a cultural institution. The NGO is gaining increased support and now has 25 volunteers working on various social projects. They can also count on support from neighbors and other people who spontaneously join in on local programs. But so much personal initiative does not go down well in the Chavistas stronghold. "The Colectivos have already investigated the charity many times," says Delgado. For him, the Colectivos are a paramilitary gang with close links to the government that control the whole district. According to the opposition, this gang, which has been armed by the government, is the reason that Caracas has become the most dangerous capital city in the world.

The Colectivos often overstep the boundary into organized crime - which is tolerated by the state. They control the drug and arms trade, say neighbors who want to remain anonymous. "They try to stop, or slow down, our work," says Delgado. "They only let us work if they have given us authorization beforehand." This is because the Chavistas have traditionally considered social work to be their domain. And now pro-opposition NGOs are moving in to fill the vacuum. 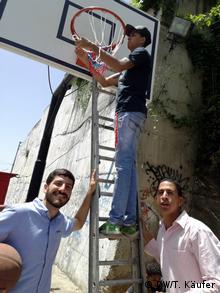 Active social work as an alternative

The young Venezuelans around Delgado and Buzon are concentrating on active social work. "People here support us. Especially thankful are the parents of kids and youths because something is finally being done," says Delgado. Many of the other volunteers are members of the opposition, or at least sympathetic to it.

But despite this, it is important for Leandro Buzon that his organization remains independent. "Political independence has always been our policy, and will continue to be so," he says. Buzon believes that the fact that many in his NGO are very critical of the government is due to the current crisis: "The government is to blame for the conditions in the country. It is a normal political process that many people lose faith in the government when things aren't going well."

"What is most important to me is to help children," says Delgado. "We just can't let things keep going like this." And he makes no secret of the fact that the group plans to become politically active at some stage. "If we keep on growing like this, if we keep on working in this way, then there is no reason why we shouldn't become actively politically involved, so that we can change things around here." There is a lot of demand for such policies. "Without a functioning society, there is no functioning state," Delgado says. "This is what we experience everyday in Venezuela."