A perfect storm of various problems could threaten Saudi rulers | World | Breaking news and perspectives from around the globe | DW | 04.03.2011

As the wave of protests crashing through the Arab world shows no sign of abating, concerns are mounting over the stability of one of the richest and most influential countries in the Middle East: Saudi Arabia. 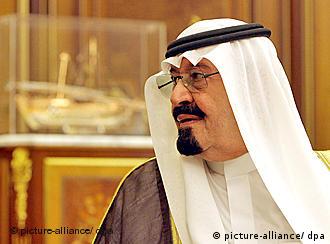 The world's top oil exporter - which sits on a fifth of the planet's reserves - is one of the West's most important strategic and economic allies in the Middle East but its position as such has often led to many Western nations turning a blind eye to the repression and human rights abuses which have helped keep the modern version of the Saudi royal family in power for over 80 years.

The House of Saud has often ruled with an iron fist and as a consequence, a simmering discontent has festered among its underprivileged classes. The Saudi elite's control has rarely allowed any significant opposition and dissent has usually been silenced quickly and with disproportionate force.

However, a number of pressing concerns within the kingdom are coming to a head at a time when the storm of unrest blowing through neighboring states has removed other seemingly intractable leaders from power.

"Stability is fragile and may be illusive in Saudi Arabia," Kristian Ulrichsen, a Middle East expert at the London School of Economics and Political Science told Deutsche Welle. "The kingdom possesses some of the attributes that drove the protests in Tunisia, Egypt and Libya." Ulrichsen cites high unemployment, widening disparities between the haves and the have-nots, and a growing discontent about perceived corruption and mismanagement of national economic resources as some of the factors that could spell trouble for the Saudi rulers.

And indeed, Saudi Arabia currently faces an explosion in youth unemployment where some 70 percent of the kingdom's almost 19 million population under the age of 30 have a tough time finding work. Unemployment in the total population meanwhile is running at ten percent. While growing anger within the jobless community could be enough to incite a popular uprising should the winds of revolution blow across the Saudi border, there is a more dangerous aspect to the unemployment problem which is sending ripples of concern through the regime. 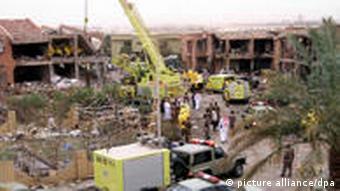 Al Qaeda's bombing campaign showed the extent of its threat

Disillusioned youths who struggle to find gainful employment are the ideal targets for extremist Islamist groups looking to exploit any discontent and recruit followers for their mission to overthrow the US-allied Saudi royal family.

After waging a bloody campaign against al Qaeda between 2003 and 2006, Saudi security forces managed to force many of the extremist cells out of the country but only as far as Yemen where they regrouped to form al Qaeda in the Arabian Peninsula (AQAP). Despite being displaced, AQAP retains its desire to force the collapse of the House of Saud and remove "infidel" forces from the home of Mecca, Islam's most holy site.

"There is a danger that al Qaeda or other groups could try to capitalize on anti-regime feeling, particularly if any uprising is met by great force," Ulrichsen said. "The role of religion in Saudi Arabia is greater than in the countries of North Africa, so any vacuum that emerges could provide a vacuum for extremist groups to take advantage of."

In an attempt to reduce the risk of disillusionment among the unemployed leading to radicalization, King Abdullah recently announced a raft of reforms which would overhaul the education and judiciary systems, while unveiling benefits for Saudis worth around $37 billion (26.4 billion euros). 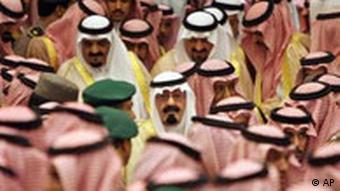 This in itself presents has presented its own set of problems. The planned reforms have already drawn criticism and fierce resistance from the kingdom's religious elite, the influential Wahhabi clerics who wield great power in the country in accordance with a historical pact with the al Saud family.

The reforms have also come under fire from democracy activists, liberals and Islamists who say that they do not go far enough and that the king should renounce the kingdom's absolute monarchy to allow elections, the formation of a parliament and political parties, and more public freedoms.

"The Saudi regime must work hard to include all aspects of society when it introduces these new measures, building consensus, and we can expect to see more of this in the future," Christopher Boucek, a Middle East expert at the Carnegie Endowment for International Peace, told Deutsche Welle. "There will always be opposition, but the key goal is to always maintain societal cohesion and avoid instability."

There was a move to revamp the kingdom's cabinet in 2009 but the proposed municipal elections which would have seen an injection of new blood was rejected and overturned by the more conservative princes within the royal family.

And therein lies another problem. King Abdullah, who is 87, has been suffering from ill-health for some time and while he was undergoing medical treatment out of the country recently, Crown Prince Sultan – another man in his late 80s – was put in charge. Neither are long-term solutions to who will rule the kingdom in the future which opens Saudi Arabia up to a succession debate.

Of the leading candidates, the most likely successor is the hard-line conservative Interior Minister Prince Nayef who is a backer of the kingdom's strict religious police. Analysts believe that Nayef would reverse Abdullah's reforms in line with the wishes of the Wahabist clerics should he take power and increase the regime's strict grip on all political and religious instruments. 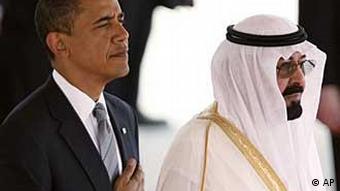 Should the calls for leadership reform – as expected – fall on deaf ears, it could further enrage the country's Shiite minority which has long complained about marginalization by the Sunni-led Saudi elite and which has been emboldened by the Shiite protests in neighboring Bahrain. A number of small scale protests have already taken place in the oil-producing Eastern Province where the minority lives, resulting in armored cars being sent to the region to monitor events.

If all these factors combine and join with the spreading feeling of empowerment in the Arab world to destabilize Saudi Arabia, the West – and the United States in particular – would become very concerned, very quickly. Not only is Saudi Arabia of global importance because of its oil reserves but it's home to the biggest Arab stock market, it's a major owner of dollar assets and it also serves as regional linchpin of US policy in the Middle East.

Kristian Ulrichsen believes that, should it come under threat, the Saudi regime will aggressively confront any opposition and fight to retain power while attempting to use all its influence and leverage with the West, citing its stabilizing role in international oil markets, the fight against international terrorism, and in the regional balance of power in the Gulf, particularly against Iran, to garner support for any suppression.

"It is likely that Western approaches will be far more tolerant of state-sponsored violence than in, say, Libya, and more willing to give the regime greater leeway to end any uprising, although public opinion in Western countries could be a wild card," he said. "That in turn will find the Western governments in a delicate balancing act, caught between their most strategically and commercially important ally and their domestic publics."

However, Christopher Boucek remains unconvinced that Saudi Arabia will go the same way as Tunisia or Egypt and that it's premature to debate the collapse of the Saudi government and possible Western intervention.

"Observers have been forecasting the fall of the Saudi government for decades, yet the kingdom has survived," he said. "The Saudi state is very well established, with a lot of political credibility and religious legitimacy. There will very likely be a cabinet reshuffle shortly, and I would expect that the king will use this opportunity to advance some individuals and agendas aimed at further reducing the tensions that we have seen elsewhere in the region."

Omanis rise up in search of social justice

The latest country to join the fray of protest action sweeping North Africa and the Gulf is Oman, where protesters are demanding better social-economic conditions. The Gulf state is an important strategic US ally. (01.03.2011)

With the threat of Iran looming large over the region, the US is boosting the military capabilities of friendly Arab states in deals worth billions of dollars. But the arms sales carry huge risks as well as huge profits. (19.10.2010)