A peaceful weapon for democracy

Fifty years ago, a military coup was staged in Greece. The violent government takeover was followed by a ruthless regime that lasted seven years. Back then, DW played a key role for the resistance.

On the morning of April 21, 1967, tanks rolled into the center of Athens. A small group of conspirators led by colonel Georgios Papadopoulos took over the Greek kingdom, bringing about seven years of ruthless military dictatorship. The putschists violently seized control because they feared the upcoming re-election, initiated by the Center Union party in their struggle for power against the king. On the day of the coup, thousands of left-wing opposition members were arrested. Later, the king fled into exile.

The regime set out to take absolute control of the country, censoring the media and harassing and killing opposition activists. Fear dominated everyday Greek life as the government urged its spies to identify all people linked to the resistance. The only sources of information not controlled by the so-called "Regime of the Colonels" were foreign broadcasters - initially the BBC, Radio France and Radio Bucharest primarily.

DW - or "Deutsche Welle," as it was referred to back then - was not well known in Greece when the coup happened. DW's shortwave radio program had only been broadcasting in the Mediterranean country for three years. Their newscast, started in 1964, initially tried to abstain from meddling in domestic Greek politics. But in 1969, two years into the regime, newly-appointed DW director Walter Steigner, together with a small team of dedicated Greek journalists, decided to radically change the course of the broadcaster's Greek division, choosing to give a voice to dissident opinions and siding with those fighting for democracy and freedom in Greece.

DW's political media experiment in Greece succeeded. From the country that initiated the destruction of World War II, of all places, hailed the broadcast that became the "voice of freedom" during the Greek regime - a broadcast that took over Greek households in spite of being banned by the junta.

"I was a little boy back then," popular satirist Lakis Lazopoulos remembers. "The whole neighborhood went to an old barber that worked at his apartment. One evening, I went over there to get my hair cut. But the old man sent me away, saying 'I don't have time right now, I need to listen to DW.' 'What is DW?,' I asked him. 'DW, those are the ones who tell us the truth,' he told me." On that evening, Lazopoulos said he understood that the colonels were in power. From that day on, he turned his radio to DW at 9:40 p.m. every night to listen to the broadcast from Germany - just like an estimated 3 million other Greeks.

No holds barred via shortwave

DW's Greek program extensively covered the activities of the resistance movement forming abroad. People first heard of what happened to resistance fighters in Greece - the mass arrests and torture - on the broadcast. Through a wide-spanning network of informants, editors collected and distributed all the important news withheld by the regime's censors. The team had to constantly strike a balance between independent coverage and Germany's economic interests in Greece. 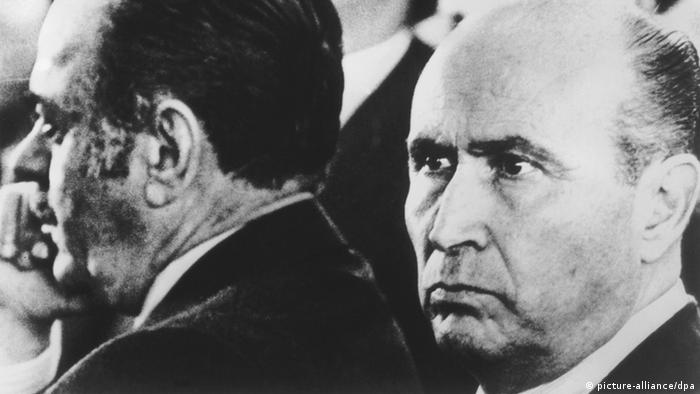 Dimitrios Ioannidis and Georgios Papadopoulos led the 1967 coup in Greece

Unlike the politically neutral wording employed by the BBC, DW's pugnacious opinion pieces were a thorn in the regime's side, giving wings to the opposition. "I listened to the broadcast every evening with my wife and my kids during the two years when I was banished to [the mountain village of] Zatouna, and I still remember how the show strengthened our morale and conviction," famous composer Mikis Theodorakis said. "The center of the Greek-German relationship back then was DW." The program developed into a peaceful weapon used by pro-democracy forces. After the dark years of brutal occupation during World War II, Germany invested morally and politically in a brighter Greek future.

In June 1974, the regime in Athens collapsed after a failed coup in Nicosia aimed at unifying Greece and Cyprus. Democracy was restored in Greece. And when some of the members of the DW team returned to Athens after a seven-year absence, their taxi drivers refused to charge them when they recognized the voices that brought them uncensored information on Greek politics from the broadcaster's then-headquarters in Cologne.

Among the people working for DW back then was Karolos Papoulias, who would go on to serve as president of Greece from 2005 to 2015. "That broadcast was a historic symbol in the fight for democracy and human rights," he later said. The name "Deutsche Welle" still moved Greeks, even those who were not yet born during that time, Papoulias added.

This chapter in the shared history of DW and Greece has lost little of its symbolic power. If there is the smallest indication that civil liberties are under threat or the truth is censored in the southern European state, that journalistic resistance is recalled as a precedent. When the current government of Alexis Tsipras released reports that sugarcoated the country's state of affairs, a well regarded online outlet published an article criticizing the government. The headline of the piece? "Maybe it is the time of Deutsche Welle again."

The junta of Athens and the Greek DW program

During the military dictatorship in Greece, DW made journalism history. (21.04.2017)

A year after the military coup, the EU is reportedly preparing a fresh round of sanctions on Myanmar. Rights groups have called for the lucrative natural gas sector to be targeted, but the decision has been delayed.

One year ago, Myanmar's generals took power away from the county's democratically elected government. But the ruling junta faces heavy challenges — and resistance to its rule will continue to come at a great human cost.