A new lease of life for an ancient technology

Water-powered mills have been used for centuries by mankind. The ancient technology is now enjoying a revival with traditional water mills such as the Gollmitzer near Berlin, being used to produce carbon-free energy. 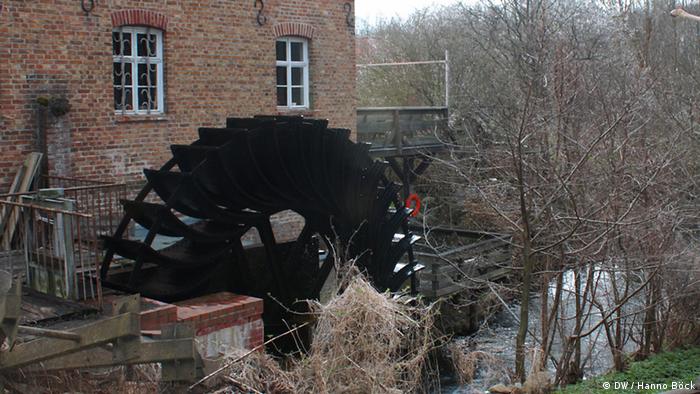 The mill goes clickety-clack on the whirring brook,
Clip, clop
By day and by night, the miller stays awake
Clip, clop

So goes a famous 19th century German children’s song, romanticizing the life and work of the miller. It was an important profession during the time, in large part because millers supplied the grain needed to make bread.

In the Uckermark region north of Berlin, signs of the millers’ heyday still dot the idyllic landscape, relics from the beginning of the industrial revolution. That includes the Gollmitzer mill - a majestic, redbrick half-timbered building near a pond with a six-meter high water wheel turning at its side. When bread production was industrialized, mills fell into disuse. The Gollmitzer lay idle, gathering rust for decades until Kai Rogozinski rowed by in his canoe.

“I wanted to use the power of the water,” said Rogozinski, a canoeing enthusiast who was fascinated by the ancient water technology. He bought the Gollmitzer mill ten years ago. A heating engineer by profession, Rogozinski knew well that the Gollmitzer once provided energy to surrounding communities, and he decided to bring it back to life. He began renovations, installing a new water wheel. 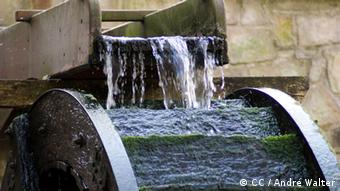 “I built in what’s called a Zuppinger wheel, with a 6-meter diameter,” Rogozinski said, raising his voice to be heard above the sloshing of the water. The wheel was invented by Swiss engineer and manufacturer Walter Zuppinger, who secured a patent in 1849. With its typical 'backwards' inclined curved blades, the Zuppinger was a major improvement on the traditional models of the time.

The Gollmitzer mill was designed to resemble the style of the era, with the wheel and blade made of traditional dark wood. The current from the dammed mill pond pours the water diagonally over the wheel, making it rotate in what is almost a backward motion.

Using the free energy of the falling water, the old wheel uses new electric technology – a generator tucked away in a small room behind the wheel – to produce electricity.

The rest is fed directly into the electricity grid. Thanks to the German Renewable Energy Act, network operators are obligated to take in and distribute clean energy that is generated.

That is why Kai Rogozinski says it is more cost effective to consume as much energy as he can himself.

“With a modern turbine, you can generate around 12 percent more electricity,” Rogozinski said, adding that it would not have amounted to preserving tradition. Besides, the government provides financial incentives for restoring and modernizing old water mills. “I would not have been able to undertake the reconstruction if I hadn't received the financial support,” Rogozinski said. 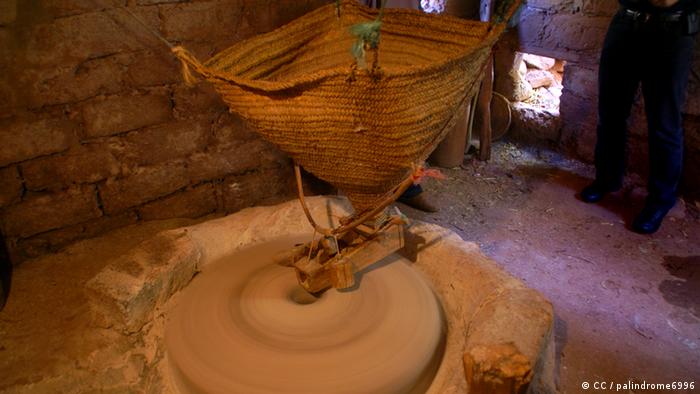 Grinding with the help of water: hydropower has a long tradition as a source of energy

A long tradition and history

The history of the Gollmitz mill dates back to the 13th century. “We know that the original mill was destroyed in the 17th century during the Thirty Years’ War,” said Rogozinski, adding that it was rebuilt in 1724.

When it comes to generating energy from nature, water mills are one of the oldest forms known to man. Before the industrial revolution and internal combustion engines, it was water mills, powered by wind and water, that served as the backbone of pre-industrial society. From grinding grains to extracting biofuels and dyeing agents from tree barks, mills were an essential part of daily life. The oldest known mill is believed to hark back to Mesopotamia, 500 years before Christ.

Kai Rogozinski says the mill in the Uckermark proves that if the falling height of the water is right - the creek where the Gollmitzer is located is just 2 meters wide - small quantities of water can be used everywhere to efficiently operate a small power station.

And the region has great potential, too. "On this creek alone, there used to be 10 mills. Now there are only 2 left," he said.

But generating electricity is not his only goal, says the miller. Occasionally, he uses the mill stones to grind corn into flour, and he hopes to soon start supplying the local organic bakery.

Green gadgets are devices we use on a daily basis that are both practical and sustainable. With their smart, innovative features, they also help raise new awareness about renewable energy. (01.05.2012)