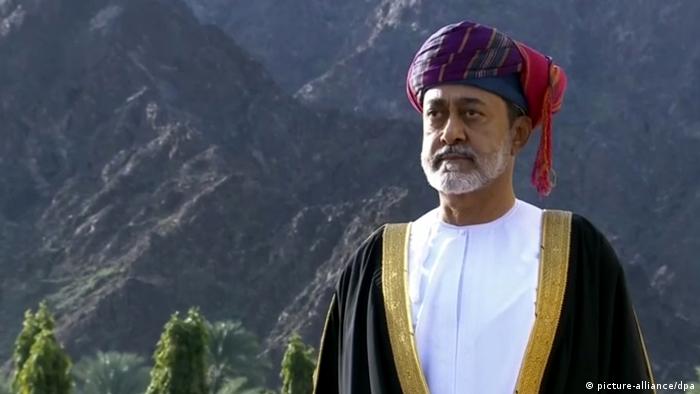 His predecessor, the longest-serving leader in the Arab world, died on Friday at the age of 79 following a long struggle with colon cancer.

Under Qaboos, Oman distinguished itself as one of the few diplomatically neutral countries in the Middle East and took on the role of an international mediator. Those are enterprises Haitham will look to continue, analysts have said. The new sultan's promise to maintain Oman's foreign policy neutrality is seen as a sign that the country likely will not face major upheaval due to the change in power, despite major unrest in other parts of the Middle East.

"He has already indicated as such in his first statements that he plans to continue Sultan Qaboos' legacy, and this, I think, is ever more critical because Oman is situated as a neutral actor within the Arab Gulf countries, and there have been a number of disputes over the years," said Sanam Vakil, deputy director of Chatham House's Middle East and North Africa Programme.

Oman has helped mitigate multiple regional crises, most notably facilitating the release of the three American hikers detained by Iran in 2009, and playing a role in helping Qataris return to Doha during the 2017 Qatari diplomatic crisis in which several  Persian Gulf countries blocked sea route access to Qatar.

"Historically, we know that Oman was very important in creating a backchannel and securing the release of the three American hikers," Vakil said. "Because Oman has had this balanced foreign policy, it has been a very good interlocutor for both countries [the United States and Iran]."

Oman's ability to maintain relations with countries including the United Kingdom, Israel and China has made it stand out as a bastion of neutrality in the Middle East.

"Being a neutral country immediately differentiates Oman from the rest, and that can be a great advantage for them as it tries to attract foreign investors and discover a new role for itself in the wider economic context," said John Sfakianakis, a Gulf expert at Cambridge University and associate research fellow at Chatham House.

Moving Oman away from oil

Haitham will come under pressure to manage the country's internal affairs and implement an ambitious economic diversification plan.

To move Oman away from an oil-based economy, he'll first have to answer to his new constituents, who have only known one sultan throughout their lives.

"His continuity [of Qaboos' policies] is a really good message in order to build trust with the Omani population," said Vakil.

Haitham chairs the Oman 2040 committee, which aims to push the Gulf state into a more sustainable economy. Since the 2014 downturn in oil prices, Oman, which has the smallest fuel reserves of any of the Gulf states, has grappled with a high unemployment rate and a strained public budget.

"The challenge for the new sultan will be [figuring out] how to move to the post-oil economy, and how to maintain the wealth for the majority of the people," said Sfakianakis.

"He [Haitham] has very big shoes to fill," Vakil said.

The new sultan, 65, graduated from Oxford in 1979 and was formerly the minister of heritage and culture. He also served as secretary-general for the Ministry of Foreign Affairs from 1994 to 2002.

But analysts are optimistic that the easy succession spells a relatively peaceful transition into Oman's new government and first head of state since 1970.

Qaboos did not have any children and had not publicly appointed a successor, but did seal his recommendation for a successor in a letter to be opened following his death. His family gathered on Saturday to consider the former sultan's recommendation and agreed to proceed with Haitham's appointment.

"The transition from one sultan to another happened very smoothly," Sfakianakis said.

"There were in the past a lot of observers who doubted that the transition would happen smoothly and within this timely manner — within just a few hours," he added. "It actually shows that the country is quite adept in its political organization. There was no conflict within the family."

Despite Oman's role as a mediator, however, the new sultan will take over as a series of crises swirl in the Middle East.

"Most distressing has been the Qatar crisis and the blockade of Saudi Arabia," Vakil said. "Also on its borders has been the war in Yemen, which has not been immune to US-Iranian conflict, and managing this pressure with a downturn in oil prices."

Read more: Oman may mediate between Iran and UK over tanker crisis

Under Qaboos' nearly five-decade reign, Oman saw huge economic and social shifts and stepped into a major peacemaking role in the region.

"The old sultan did change and modernize the country," said "The infrastructure became far more embracing and Oman was transformed from an agrarian society to more of an industrial one ... They developed their tourism industry, and today Oman is known as being an important tourist destination in the region."

Oman functions under an absolute monarchy that has been ruled by members of the Al Said family since 1744.

US decries harassment of foreign journalists in China