It's easy to shop with just a click of the mouse. But can it be people- and climate-friendly too? Architecture students think so, and they're sharing their ideas at the German Architecture Museum in Frankfurt. 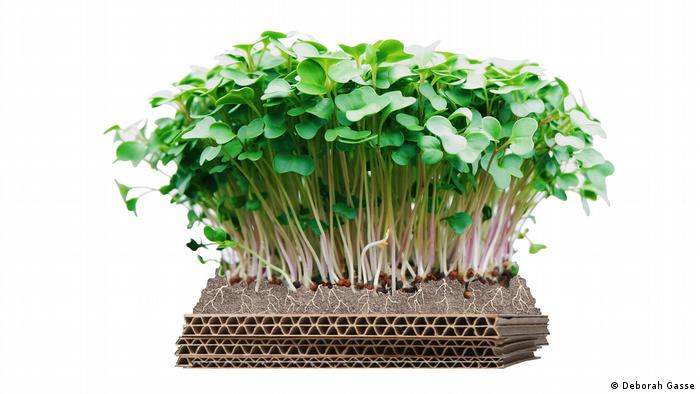 The numbers tell the story of the online shopping boom: Each inhabitant of the central German city of Frankfurt receives an average of 27 packages per year. There were no fewer than 280 million postal returns of goods in 2018. Three years prior to that, the mountain of packaging materials had already reached a gigantic 1.5 million metric tons, with the upward trend set to continue.

This intersection of digital commerce and the public space is the focus of the museum's exhibition "My home is my parcel: Can online shopping be sustainable?"

"Can we be responsible for the consequences? The devastating ecological balance, the exploitation of parcel couriers, the vacancy in shopping centers?" the museum asks in the introduction to the show.

Whether CDs, books, bikes or even groceries, the more products are purchased online, the fewer sales take place at registers in city stores. Brick and mortar stores are left empty-handed and under pressure.

Schmal believes the market triumph of online shopping is as unstoppable as that of cars in the 1960s.

Holger Kleine, professor for artistic conceptual design at the RheinMain University of Applied Sciences, agrees: "You can't turn back the clock." 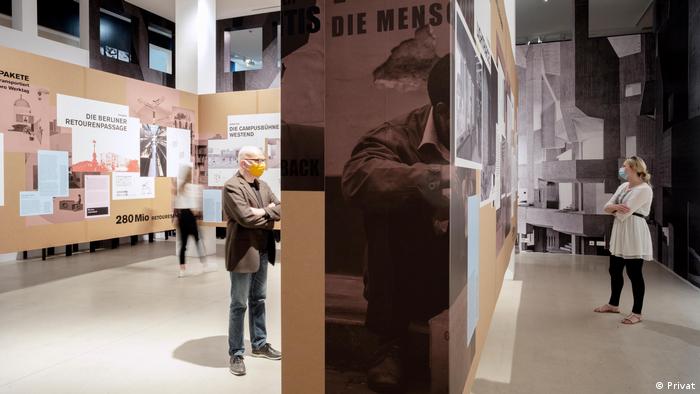 Kleine and his colleague Uwe Münzing directed a student project for the DAM that questioned the way in which online shopping functions, instead of online shopping in and of itself.

"Public space is skipped over in online shopping," Kleine says.

According to DAM director Schmal, "This means we must think about the last mile."

The "last mile" is the distance between the mid-size distribution centers and the customers. "That's where we hit our limits," Schmal says, explaining that this area is neglected architecturally. "Something needs to change structurally!"

Schmal points to China, where online companies are currently discussing introducing so-called kiosks in order to be close to their customers. "Because Chinese customers are not always at home either," says Schmal. "At the same time, their workplaces do not always have the capacity to accept online deliveries."

What could such spaces look like? How could the points of intersection between package deliveries and customers be shifted back into the public realm? And how would parcel distribution have to be organized so that online shoppers can get their goods quickly while consuming less energy and producing less packaging waste?

These questions pertain not only to the city, but also particularly to the countryside. "The demand for such places is even greater there," Schmal believes, "because thanks to the internet, people no longer have to make the arduous journey to the city to shop." These people also have to work and cannot always be at home to accept packages when they are delivered, he points out.

Online shopping with a human touch

Schmal thinks these online delivery places should spring up throughout the country "like mushrooms: small and all over the place."

"They should be open 24 hours a day — and please: Real people should work there!" he adds.

The names of the architecture students' ideas reveal the respective focus of each one: Parcel@Work, Parcell or ParceLabs. 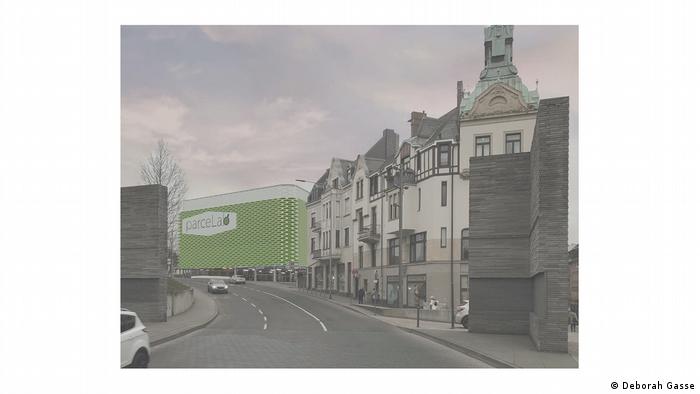 This images shows a potential ParceLab, which would convert corrugated paper into plant-friendly terrain

Parcel@Work, for instance, would aim to deliver packages to peoples' workplaces to minimize the number of trips for customers and delivery personnel.

Parcell, on the other hand, aims to establish "delivery clubs" somewhere between the large distribution centers on urban outskirts and the parcel pick-up stations close to customers. These would serve as a kind of distribution-organization hub. Much like workers' clubs in Moscow in the 1920s, Parcell would be a cafeteria, bar, cinema, medical supply station and hostel for the beleaguered parcel deliverers all in one. The guiding idea: parcel distribution in combination with a sense of community and helping each other out.

Another idea is the "Retourenpassage," or "returns center," which would ideally be near a main railway station. It would serve as a parcel delivery hall, but also, a department store where returned goods are sold, instead of being scrapped.

"It is admittedly somewhat utopian," says Deborah Gasse, about her idea for ParceLabs, which she wants to install in abandoned parking garages in city centers, among other places. "Here, we continue to use what connects all online orders in an environmentally friendly way: corrugated cardboard."

Is this a solution for the empty shopping centers, department stores and small shops of the future? Even if the retail trade disappears from cities, as museum director Schmal suspects, he sees at least one consolation: "The restaurants will remain. Who wants half-warm food delivered?"

A slower transition to online shopping means Germany hasn't yet seen the same huge number of store closures as the US and UK. Some top retailers, however, are now feeling the pinch amid a slowing economy. (13.05.2019)

There are plenty of exhibitions with a focus on nature and climate change in Germany, and they are popular with visitors. Few museums think green, however, and are changing practices and structures. (12.12.2019)