A mixed bag in the portrayal of LGBTQs in video games

Queer characters in video games still cause a major uproar. This, despite the fact that they've played a role in the games from the very start, as an exhibition in Berlin shows.

"Such a great game...ruined by lesbians. Disgusting."

"Thank you for including people like me in your stories. It means a lot to me."

"Thank you for incorporating LGBTQs [Editor's note: lesbians, gays, bisexuals, transgenders, queers] into your games as we are in real life: not unlike everyone else, very human, very real."

"You people are such a piece of crap."

"As part of the LGBTQ community, I'm so happy."

Those were some of the comments that circulated on the net when the trailer for the game The Last of Us, Part 2 was presented at E3, the world's most important video games show in Los Angeles in June 2018. In the almost 12-minute film, the protagonist Ellie kisses a woman. Users on the internet truly went wild. It was not the gameplay, nor the gloomy atmosphere, nor the merciless brutality, but a kiss that triggered both massive insults as well as tears of joy among viewers.

Yet, lesbian characters have appeared in video games for 30 years. "The fact that the topic is now addressed in the mainstream yet still stirs up mixed emotions is something we have always run into," said Sarah Rudolph, co-curator of the exhibition "Rainbow Arcade" at the Schwules Museum (Gay Museum) in Berlin.

However, "the games that originally appeared are also largely forgotten," she noted. In some cases, the productions from the 1990s are simply lost.

On the one hand, video games are a comparatively young medium that is only slowly beginning to be taken seriously as a cultural medium. On the other hand, archiving presents a major problem because there is no reliable way to store digital media in a "future-proof way." Hardware is also developing rapidly. Who still has a floppy disk drive today? 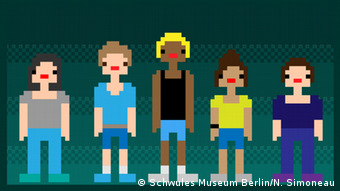 Fortunately, the LGBTQ Video Game Archive was founded in 2015 by US professor of media studies Adrienne Shaw, who is also a curator of the Berlin exhibition. Since then, she and her team have collected more than 1,000 games that contain queer content in some form, be it characters, places or stories. "Queer" is a generic term for gays, lesbians, bisexuals, transgenders, intersexuals, and anyone who doesn't call themselves heterosexual.

The first games with queer content came out in the mid-1980s and were in part deeply homophobic. For instance, the aim of Mad Party F***er from 1985 is to have sex with as many women as possible without, according to the rules of the game, "getting infected by faggots with AIDS."

In 30 years of video game history, the representation of queer figures has changed. Still, it's evident even today that "a lot of bad guys are queer," said Rudolph. "The figures are portrayed as disgusting, creepy or threatening. Or ridiculous, as a person you can laugh at who nobody takes seriously."

The Grand Theft Auto series is one of the most commercially successful video game productions. It contains an astonishing number of queer characters, but it mostly depicts them in a negative fashion. The main character Trevor from the latest offshoot of the series sleeps with women, men and teddy bears and is completely insane, bad-tempered and merciless.

Most queer characters are at home in adventure, action and role-playing games, although not every player necessarily encounters a queer story. Although in some games marriage among all sorts of people existed long before actual laws were passed in real life, players realized it was permissible only when they actually tried it out.

Some games merely imply homosexuality. For example, one player may see two young women depicted as close friends, such as Max and Chloe or Chloe and Rachel in Life is Strange (2015), or Lara and Sam in Tomb Raider (2013). A different player, on the other hand, may clearly interpret it as a love relationship between the women. Interviews with developers or sequels that delve even deeper into the lives of the characters show that these are not just fantasies among fans. 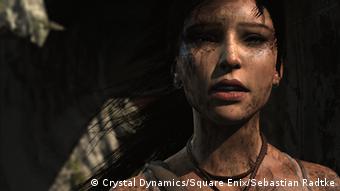 An industrious queer indie scene has been around for some years now, one not backed by major companies. "At the beginning of the 2010s, there was a big boom in indie games being presented," said Rudolph. "This shows that the tools were suddenly there." People no longer had to master a programming language; they could create their own games with simple computer programs.

Even though that initially sounds like a good thing, it actually left an unpleasant aftertaste. "Many people now don't want to have anything to do with the games they made at that time because the reactions back then were so massive, both positive and negative, that their whole lives were turned upside down," said Rudolph. The developers were showered with hatred or were completely misunderstood.

Games by and about transgender people were also used in universities to teach empathy, a promise they could not live up to. "Of course, after playing such a game, you still don't know what it's like to live as a trans-person," Rudolph noted. "After 10 minutes of playing, you simply don't know what it feels like to live like that all day long, that it's uncomfortable to go to a public toilet because you don't know if you're going to get beaten up."

Fighting for every bit of positive representation

#Gamergate became a breaking point in the genre in 2014. The hashtag stands for a debate that began with a hate campaign against a female game developer who was accused of having a relationship with a game journalist. Feminists then denounced the sexist image of women in video games, which in turn prompted death threats from angry gamers.

Since then, even the bigger studios seem to be taking more risks. Nowadays, for example, many more games with female protagonists are available than just a few years ago. Queer visibility in video games is also increasing. "There are a lot of queer developers who fight for every little bit of positive representation," said Rudolph. "The more people push their way into the industry without letting themselves be pushed aside, the more positive content there will be in the games," she is convinced. "It also shows that it sells." The predecessor to The Last of Us , Part 2, which already made clear that Ellie is attracted to women, sold more than 17 million copies worldwide.

Characters who aren't white, male and straight have always existed in video games. They were just forgotten. High time to remember the beginnings of queer video games! (13.12.2018)