A look at what makes Germans happy

A strong GDP and great social support are said to make a country happy. But a new ranking released for International Day of Happiness shows foreign-born residents of Germany are not as happy as locals. 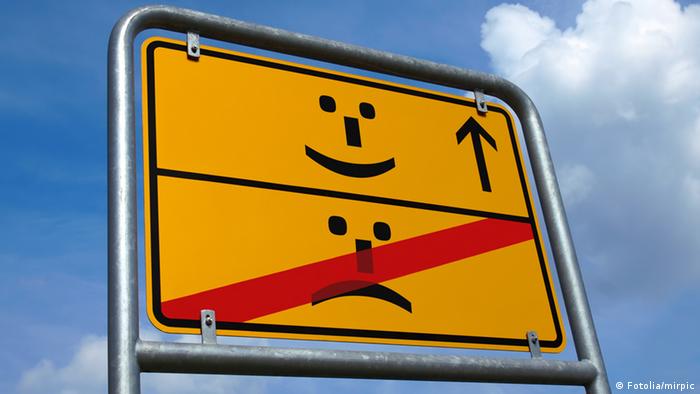 Of all the days in the year, it seems odd to me that the International Day of Happiness happens to fall on March 20, the day of the vernal equinox: a day devoted to joy at what is arguably the worst time of year.

There's a reason why, in the US, there's a common saying about March: it either comes in like a lamb and goes out like a lion, or vice versa. The weather, no matter where you are in the country, is reliably unreliable. The same can be said of my adopted homeland of Germany, where March is most frequently spent beneath a gray sky, dodging — depending where you are in the nation — either raindrops or snowflakes, often just moments after a sunbeam has broken through the clouds. Ralph Waldo Emerson said it best when he wrote, "Our life is March weather, savage and serene in one hour."

How are we supposed to be happy, even just for one day, in the middle of this transitional season? 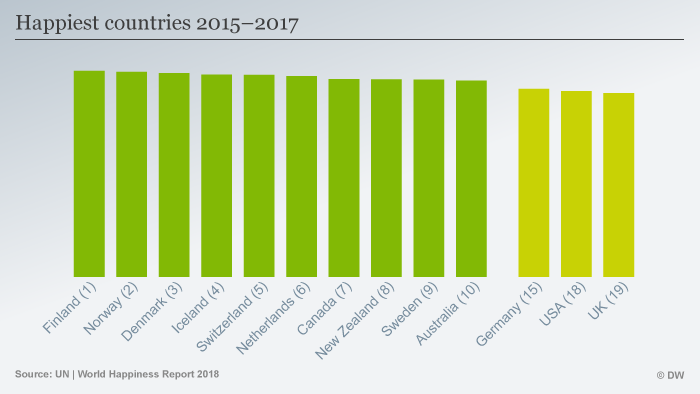 A consideration of equity and sustainability

As it turns out, the International Day of Happiness was not actually intended as a celebration of joy. Instead, the day was designed by the United Nations to draw awareness to "the need for a more inclusive, equitable and balanced approach to economic growth that promotes sustainable development, poverty eradication, happiness and the well-being of all peoples."

Adopted by the UN General Assembly in June 2012, the International Day of Happiness comes complete with its own ranking — the World Happiness Report. The 2018 edition doesn't look into pleasant weather or count the number of times each day citizens smile on average, criteria I had expected to be used to judge true joy. Instead, the researchers looked at countries' economic indicators, like the GDP per capita, and the freedom to make life choices. This year, it also focuses on happiness and migration.

Why Finns are the happiest in the world

The Nordic countries often top the list (in the 2015-17 rankings, Finland is No. 1, followed by Norway, Denmark and Iceland) despite geography limiting their residents' contact with the sun for months each year. Compare that to the tiny Himalayan country of Bhutan, ranked 97th, which sees an average of eight hours of sunlight each day, even in January. Bhutan, you’ll remember, has gained global recognition for their use of the Gross National Happiness Index measuring quality of life by reviewing statistics on literacy and crime.

The Nordic countries have come in first in the happiness report so frequently that there are books and travel packages dedicated to uncovering their secrets to happiness — secrets which the natives themselves seem a bit baffled by. Clearly, as this meme from Twitter shows, Finns are not labeled happiest because they smile a lot.

In her 2015 book, "The Year of Living Danishly," Helen Russell wrote about her move from London to rural Denmark. In her year there, she conducted informal research on why Danish people are so happy and found Danes themselves confused about the designation. She saw the political elements listed in the World Happiness Report as instrumental in creating citizen happiness — things like transparency and corruption. To up her own happiness quotient, she also lit plenty of candles to create a cozy sense of "hygge," joined sports groups, worked fewer hours and ate more pastries.

Finding joy in a land of Grumpy Guses

Russell's life in Denmark sounded a lot like the life I have in Germany — where people are much less prone to smiling than in the US, where everyone is in some sort of badminton or table tennis or triathlete training group, and where pastries are eaten in abundance. So why is Germany so much further down the ranking list at No. 15? And how is it that Germany beat out both the US and UK in the rankings, even though it sometimes feels like I live in a land of Grumpy Guses?

Turns out, people in every country underestimate their fellow citizens' happiness. Our perception, not only in Germany, is that people aren't as happy as they report being on the survey. And it's still difficult to measure the quality of social context.

While those candles and baked goods have been found to strongly influence emotions, they aren't taken into consideration in this ranking; instead, the researchers weighed generosity and having someone to rely on for support to glean the role of social factors in happiness.

While the rankings are influenced by political and historical trends, resilience tends to dampen that fluctuation. So when a prosperous country faces an economic downturn, as Finland has over the last decade, its citizens still rank themselves as being content in their lives due to a strong social safety net. Germans find happiness in sports clubs, with family — or in their allotment gardens

Happiness is also quite a subjective thing and in this case, might be a matter of perspective — namely, mine. In the 2018 World Happiness Report, researchers added a new ranking, one which measured the happiness of foreign-born people in a country. Again, Finland came out on top, with Denmark, Norway and Iceland close behind. Using the same measurements, Germany dropped to 28th place. Could it be that while Germans are indeed a happy people, I am not, due to the circumstances I face as an immigrant?

It's hard to distinguish causation and correlation based on the data provided. But the authors do note that people tend to migrate to the happier countries, which happen to be wealthier countries. They also write that "the life evaluations of immigrants and of the native-born are likely to depend on the extent to which residents in each country are ready to happily accept foreign migrants."

But I also wonder if it doesn't otherwise have a bit to do with my understanding of what happiness is. Just because a Finn never smiles, according to the meme, doesn't mean s/he isn't happier than the cheerleader with the pearly whites. And just because a German isn't jumping for joy doesn't mean his or her heart isn't bursting from all the happiness bottled up on the inside.

Read more: Where are the happiest Germans?

So just what does make German people happy? To answer that, we'd have to look at another index, this one published by Deutsche Post on an annual basis. The Happiness Atlas, a public opinion survey similar to the Gallup World Poll used by the World Happiness Report, compiled a series of commonalities that people reported making them happy. Surprisingly, it wasn't the number of hours people come in contact with the sun.

They're just what you think they might be, things like love, access to health care and education. Likewise, sporting groups and hobbies give Germans a boost. As does, unexpectedly, work. And more specifically, control over their hours and the ability a person has to decide how to spend his or her time. In that respect, the people of Germany aren't so different from the rest of us.