A look at deportation policy in Germany | Germany| News and in-depth reporting from Berlin and beyond | DW | 09.02.2017

Deportations of rejected asylum seekers have been a point of controversy in German politics over the past few months. Here’s a look at the deportation debate and statistics. 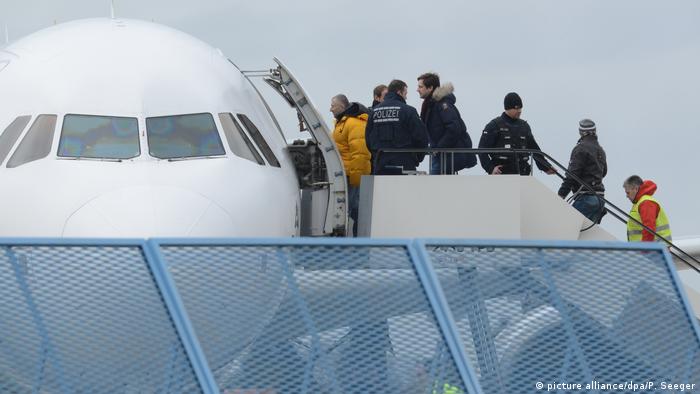 In recent months, the German government has been speeding up deportation processes for those migrants who do not receive refugee protection.  The news agency AFP reported on Thursday that around 80,000 migrants in total had left Germany in 2016, out of a total of 280,000 asylum seekers that arrived in the country last year.

Of that number, 54,000 returned home voluntarily while the rest had been deported, either by charter plane or by other means of transportation over land or sea, according to a statement by German Interior Minister Thomas de Mazière in January.

Although there has been a drop in the number of asylum seekers since 2015 - when nearly 900,000 refugees entered Germany - the government has made a push for migrants to return home by choice. Recent programs, such as the "Starthilfe Plus" that started February, will pay a fee of up to 1200 Euros to migrants who return home voluntarily.

Why is this a debate now?

Meanwhile, German Chancellor Angela Merkel has unveiled a new 16-point plan to speed up deportations ahead of federal elections that will be held in September.

Merkel hopes that the push for more deportations could rally her conservative base behind her against the populist Alternative for Germany (AFD) party, which has been critical of the chancellor's open-door policy towards asylum seekers, even calling for asylum seekers to be sent to islands outside of Europe.

Concerns over security in Germany have further increased pressure on the chancellor. In December of last year, Tunisian migrant Anis Amri drove a truck into a crowded Christmas market in Berlin, killing 12 and injuring 56 people. Amri had not been granted asylum, but he couldn't be deported to due his home country of Tunisia not being certain of his nationality.

Germany has wanted to make it easier to deport those failed asylum seekers, especially those who could be a threat to national security.

Other attacks in Europe, such as the 2015 Paris attacks and the 2016 attacks in Brussels and Nice, have made people more critical of who is let into the country as some of the perpetrators had received training in Syria from the "Islamic State" and had returned back to Europe.

On the left, the Social Democrats (SPD) and their candidate for chancellor, Martin Schulz and his party have been critical of Merkel's more hard-line deportation policy over the past few months.

In particular, the SPD has contested the deportations of migrants to Afghanistan, which the party believes is not a safe country of return due to the unstable security situation there.

Fighting between the Taliban and the Afghan government still continues in many parts of the country and 11,900 Afghan nationals in Germany were slated for deportation since mid-December. State governments controlled by the SPD, such as Rhineland - Palatinate and Lower Saxony, have been holding up deportations, according to German news outlet, "Der Spiegel."

Deportation policy is ultimately up to governments of German federal states to decide, but the federal government is looking into new measures that will enable it to deny residence permits to asylum seekers and carry out deportations faster.