He started his career as a printer and socialist boy scout. Then he became a fighter pilot, cosmonaut and political icon. Through his life, Sigmund Jähn remained dedicated to space exploration and science. 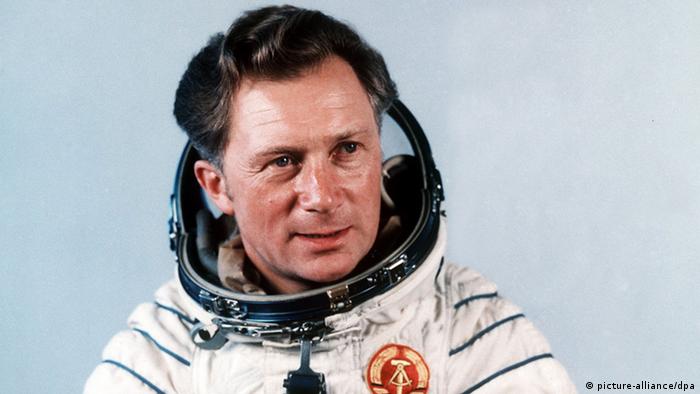 "The first German in space always saw himself as a bridge-builder between East and West and for a peaceful use of space," Ehrenfreund added.

Despite his fame, Jähn remained modest and was respected by many.

"The news of Sigmund Jähn's death has touched me deeply. Whenever we met, it was very personal, a friendship was created that wasn't only about space travel and his untiring support for European astronauts," Jan Wörner, director general of the European Space Agency, said.

"I'm deeply thankful to have been able to meet him and will not forget him," Wörner added.

The race to space between East and West was in full swing on August 26, 1978, when East German Sigmund Jähn took off on board of space ship Soyuz 31 to the Soviet space station Saljut 6.

Some time had passed since Yuri Gagarin flew to space as the first man in 1961 — an achievement countered by US space agency NASA with a total of five moon landings between 1969 and 1972.

Now, a new phase in the world's space competition was about to begin. The Soviet Union's socialist fraternal countries were invited to send their own cosmonauts into space — long before the US opened its own space program to its allies.

Space exploration as a symbol of socialist solidarity

Moscow wanted to prove the superiority and unity of the socialist world. Between 1978 and 1981 the soviet space agency sent cosmonauts from Czechoslovakia, Poland, Germany, Bulgaria, Hungary, Vietnam, Cuba, Mongolia and Romania into space.

A particularly clever move by the authorities in Moscow was the invitation of France to send a cosmonaut to space as early as 1982. The first western European in space was therefore travelling aboard a Soyuz space ship. It wasn't until one year later that NASA started its space shuttle program and invited astronauts from other countries for the first time. The first one was Ulf Merbold, traveling for West Germany to the Space-Lab.

Jähn traveled to space a lot earlier. He was the third non-Soviet cosmonaut. Vladimir Remek from Czechoslovakia and Miroslaw Hermanszewski from Poland preceded him. Many saw the comparably high ranking of the German Democratic Republic (GDR) on the list as recognition by Moscow of the young state's political status — but also of its importance in science and technology. Jähn was more than a cosmonaut — he symbolized the new prestige of the smaller and economically weaker German state. 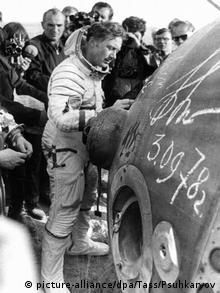 Back on Earth: Sigmund Jähn signs the Soyuz landing capsule

An icon of the working class

The first German in space seemed to be custom made for his role as a socialist figurehead for space and science. He grew up in a working class family in a small mining town called Morgenröthe-Rautenkranz in the Vogtland mountain region. He did not have a higher education but was already a trained book printer when he joined the predecessor of the East German army at the age of 18.

Then his career path took him right to becoming a military aviator. He became wing commander for political affairs and finished his high school diploma during his time serving in the military. That qualified him for an advanced education at the Military Academy in Moscow, where he learned fluent Russian. Back in Germany he was put in charge of fighter plane pilot education and aviation security in the rank of Lieutenant-Colonel.

His experience in aviation and deep knowledge of Russia and its air force almost predestined him for his future cosmonaut career. Along with two other colleagues he was sent to the Star City near Moscow, where he received his cosmonaut training.

For Jähn, the scientific aspects of his work always remained a central part of his life. During the almost eight-day long flight he conducted experiments with a spectrometer for Earth-observation. He turned the discoveries of his experiments into the subject of his dissertation, which he finished at the Central Institute for Geophysics in Potsdam — the predecessor of today's Research Center for Geosciences (GFZ).

During his space flight, he also conducted experiments in material sciences, especially with growing crystals and breeding cells of microorganisms in combination with polymers. 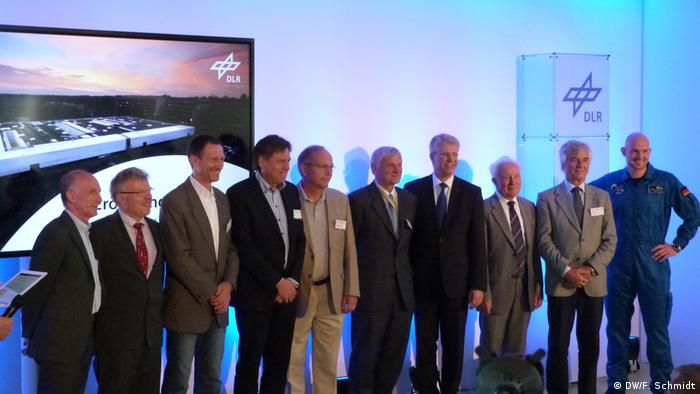 After his return, Jähn became head of the newly founded Center for Cosmic Education of the Airforce of the National People's Army (NVA) in Straußberg near Berlin.

Still in his new function he advocated exchange and partnership between astronauts and cosmonauts worldwide. He was essential in bringing about the foundation of the Association of Space Explorers — an exclusive club of all people who spent at least one full Earth orbit in space.

Mediator between East and West

After his space flight, the GDR celebrated Jähn extensively. Schools were named after him and he received some of the highest orders and honors the country had to give.

Jähn later went on record to say that he would have liked more time to dedicate to his actual scientific work. But his representative and political duties often took the upper hand.

That changed with the fall of the Berlin Wall. With the disappearance of the GDR and its army, the NVA, Jähn had to reinvent himself. He started working as an adviser for the European Space Agency (ESA) and DLR and was dispatched to the Russian space agency Roskosmos. He also returned to his old haunt: The Star City near Moscow.

Thomas Pesquet made contact with the Earth today via a live video link. He described his first impressions of the ISS - and got some words of encouragement from his family. (23.11.2016)

Talk: Business and the aerospace industry

Three Astronauts are on their way to the ISS - are you a little bit jealous?