A future without women - no female Future Prize nominees

There are no female scientists nominated for the German Future Prize this year. Sadly, that's not out of the ordinary. Twitter users have had it with women being ignored, and are calling for change. 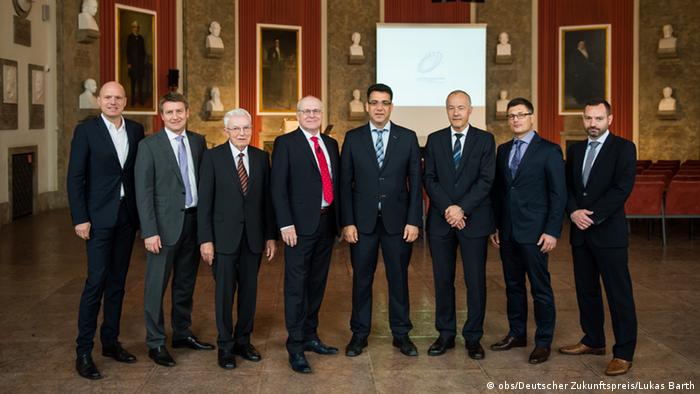 The German Future Prize ("Zukunftspreis") is a prestigious science award that honors innovative scientific research with real-life applications. It is awarded by the German president and endowed with 250,000 euros ($280,000) in prize money. In 2016, the prize celebrates its 20th anniversary.

But when this year's nominated projects were announced on Wednesday, a sadly familiar debate erupted on social media: why are there only male nominees? Three projects, eight scientists and not a single woman. And this isn't a first. In 2015, there wasn't a single woman among the nine nominated researchers either.

Here at DW's Science Desk, we discussed the issue at length - in our editorial meeting and on Twitter, where many of our followers contributed to the conversation.

Elisabeth Bik, a microbiologist at Stanford University, shared this striking graphic. It shows that except for 2014, the last six years have seen only all-male teams nominated for the German Future Prize.

Over the entire 19 years the prize has been awarded so far, the number of nominated women doesn't look much better - not to speak of women who have actually won the prize.

The female winners can be counted on two hands: seven female researchers spread across four different projects have won the prestigious award since its inception in 1997. What is up with that?

Mintpink, an account that tweets in German on women in the sciences, called on its followers to topple the male domination of the Future Prize, saying "Girls, we have to change this!" MINT is the German acronym equivalent to STEM - it stands for Mathematics, Informatics, Natural Sciences and Technology.

Some of our followers didn't mince words when expressing their disappointment on the issue.

Science journalist Leonid Schneider suggested rebranding the Future Prize as the "Penis Prize" or "Women Stay in the Kitchen Prize."

How come there are no women nominees this year - and why have there been so few in the past? There are women on the jury, after all. It's almost half-female, with five female and six male scientists deciding who gets nominated and who wins in the end.

The Future Prize team says the problem lies deeper than who is on the jury. They blame the low number of women in engineering and the natural sciences. As a result, says the Future Prize, the research institutes that suggest projects to the jury don't have as many groups with female members to pick from.

The balance may not be perfect. But there are definitely qualified female scientists. They're just in the minority compared to men. Speaking out about this big problem isn't always easy - as Elisabeth Bik suggests in the tweet below.

Let's hope the 2017 Future Prize does better than this year.

The thousand-year stare: Just how blind are men to women in science and technology?

Here's the scene: 17 young scientists, holding awards. All 17 are men. There's one woman, a doctor in aeronautics - but she's handing out the prizes. Clearly she's an exception. And she's banging a drum for women. (16.09.2016)

Women in Germany balance career goals with pressure to parent

Studies have a lot to say about how women balance work and family, but what do women have to say about it? DW's Kathleen Schuster spoke to several German women about their expectations and experiences of "having it all." (10.09.2016)