A Dose of Reality for Germany's Left Party?

Three weeks before Germany's general election, the newly formed socialist Left Party is starting to flag in the polls as it battles to defend its campaign platform considered by many critics as financially unviable. 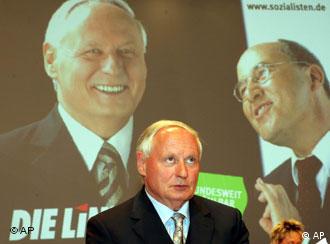 "We don't have our heads in the clouds," said party president Lothar Bisky.

The Left Party platform envisages a minimum monthly salary of 1,400 euros ($1,720) before tax, a minimum pension of 800 euros ($980 dollars), universal free medical treatment and tax relief for those on low incomes. The cost would be 60 billion euros ($74 billion dollars) which could be met "if we finally make well-off people and high earners contribute to the common good, as they should," Bisky said.

The manifesto was overwhelmingly endorsed at the end of the congress on Saturday, with only two of the 400 delegates voting against it.

The Left Party includes the former Communists of eastern Germany and western ex-members of the governing Social Democrats (SPD) who resigned over Chancellor Gerhard Schröder's plans to trim the welfare state, grouped in the WASG party.

The split on the left coupled with the unpopularity of the

Headed by two popular politicians, easterner Gregor Gysi and westerner Oskar Lafontaine, the Left Party is considered certain to obtain more than five percent of the vote, thanks to its strength in the east, giving it several members in the lower house of parliament, or Bundestag.

But there is uncertainty as to its probable final result. Polls

earlier this summer suggested the party could get nearly 13 percent of the vote, but support has now dropped to between seven and 10 percent.

Bisky, a former member of the Communist party in the old East Germany, accused Schröder of "losing contact with reality" in the face of capitalist "neo-liberalism." Lafontaine, a former finance minister in the Schröder government and one time SPD chairman, said he was proud to take part in the creation of a strong and united German left which should "finally be clearly again on the side of the weak" and "offer a counter-proposal to the neo-liberalism" of Schröder, characterised as the "grave digger of the SPD."

But Lafontaine, who quit the SPD to join the WASG some months ago, has repeatedly come under uncomfortable scrutiny recently.

In a speech he used the phrase "foreign workers" which has certain connotations in Germany even 60 years after the end of the Nazi regime. He has also been in the headlines in recent days for renting a lavish villa on the Mediterranean island of Majorca for his vacation. 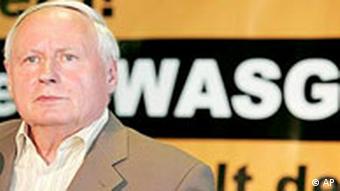 He allegedly told a newspaper that wanted him to take part in a discussion with its readers that they would have to fly him to and from the island in a private jet. He described the claims as lies Saturday, but the damage may already be done. Many Left Party members have since criticized him as a "luxury leftist" not fit to lead their socialist cause.

Gysi defended his joint head of the party list on Saturday saying that "to be on the left you do not have to be poor, you have to be against poverty. This is not a traitor: he stayed the same while the SPD stopped being social-democratic."

ratings could be explained by the end of a period of euphoria and signs of weariness.

"If talk about Lafontaine as a luxury leftist continues and damages his credibility as champion of the little people, the Left Party could drop below seven percent," Schöppner said.

"We Can't Realistically Hope to Win"

Germany's new Left Party has been rising in the polls and is likely to enter Germany's parliament after elections scheduled for Sept. 18. DW-TV spoke to Gregor Gysi, one of the party's leaders, about his plans. (Aug. 22, 2005)

Germany's new leftist alliance could be a major thorn in Chancellor Gerhard Schröder's side should Friday's confidence vote result in early elections, as support for the party surged to 11 percent in a recent poll. (June 30, 2005)