A definitive digest of African architecture 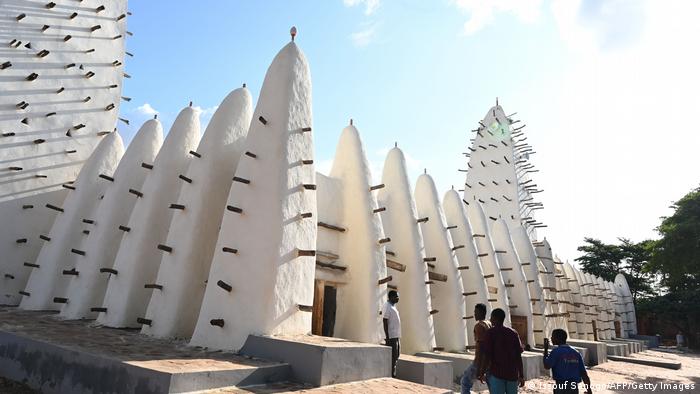 The miragelike Grand Mosque of Djenne in Mali could have very well have inspired Antoni Gaudi's renowned Sagrada Familia Cathedral in Barcelona. In Burkina Faso, the iconic Grand Mosque of Bobo-Dioulasso features conical towers dotted with wooden struts that resemble spears from afar but double up as scaffolding for repair works whenever necessary.

These are but two of the numerous impressive buildings that first captivated Berlin-based architect and publisher Phillip Meuser. It was during his work trips to West Africa that Meuser discovered the richness and originality of sub-Saharan African architecture, which until then hardly got mention in specialist literature. 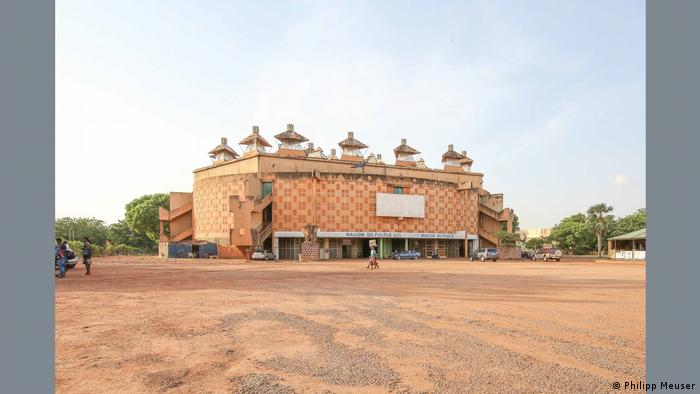 This sparked the idea for an exercise in superlatives: a seven-volume, 3,400-page sub-Saharan architectural encyclopedia with contributions from nearly 350 local and international authors covering the history and beauty of 850 significant buildings in 49 countries in Africa.

"The biggest challenge with this book project was striking a balance. We are based in Europe and perceive the region from Europe. We couldn't visit every place. We had to rely on many experts to support us," Meuser told DW in an interview. In his introductory essay, the architect first analyses the basic forms of African architecture. Traditionally, the architecture in sub-Saharan Africa is based on archaic building forms meant to protect against the weather, cold, and wild animals. A typical feature, for example, is large, overhanging roofs that protect against heavy rain. And clay is often used in West African architecture, especially in regions with minimal rainfall.

From huts to modernism 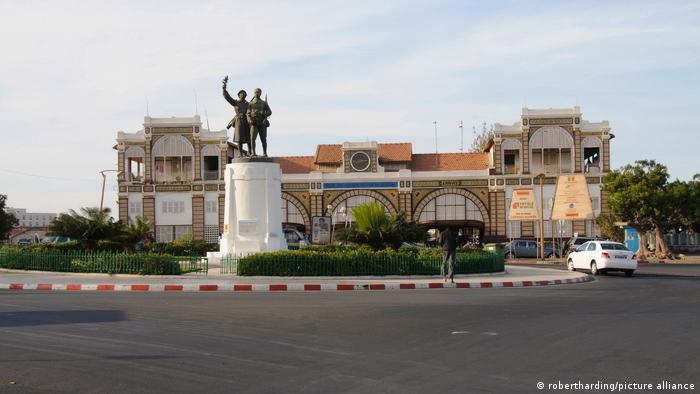 A clash of cultures: the train station in Dakar, Senegal reflects colonial times

From the 1960s onward, Tropical Modernism developed in the wake of independence, expressing the climatic conditions in forms of architectural openness that were oriented toward the design asceticism of postwar modernism in Europe.

Besides this historical dimension, the focus is on the near future, particularly marked by ecological issues and immigration to the metropolises. The urban population of some African metropolises are projected to almost double in the next 30 years, with more than 400 million people expected to flock to the cities.

Nevertheless, the cityscape of metropolises such as Lagos, Bamako or Luanda tends to be flat, with hardly any high-rises. "Cities in sub-Saharan Africa are mostly a collection of many neighborhoods, of villages. I don't want to describe this in a judgmental way: it is a community of houses that have not grown upwards, but have remained in the area," explains Meuser. 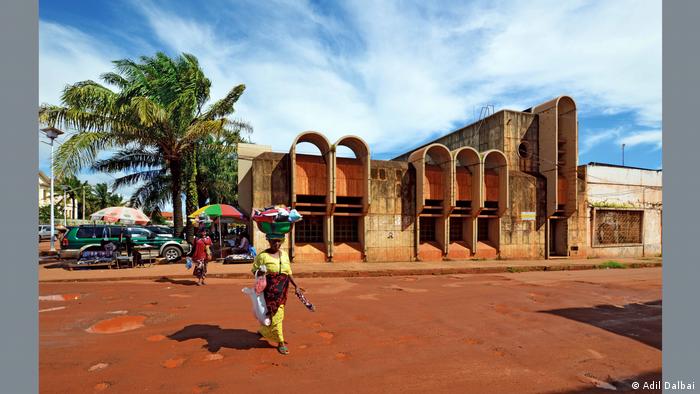 A modern touch: a former bank building in Bissau, the capital of Guinea-Bissau

China's involvement in African architecture in recent decades is also striking. Besides numerous sports arenas, entire cities, railway lines and airports have been built by Chinese construction companies. Many of these buildings could very well be standing in either China or North Korea, their architecture seemingly out of place here. This not entirely altruistic infrastructure support is compensated with raw material deliveries and mining rights. Meuser, however, views this as a new form of colonialism.

He cites the large-scale, Chinese built housing project in Kilamba, a satellite town located 30 kilometers (18 miles) south of Luanda in Angola. "Aerial photos show that it is a cookie-cutter city with individual neighborhoods only distinguished by the different colors on their facades. Some of the houses are ten storeys high. A completely foreign city typology." For a country like Angola, such a large-scale project for 500,000 people is a welcome prestige project that signals economic attractiveness and is meant to invite investors. The only thing African about this property, though, is its geographical location, not its inspiration. 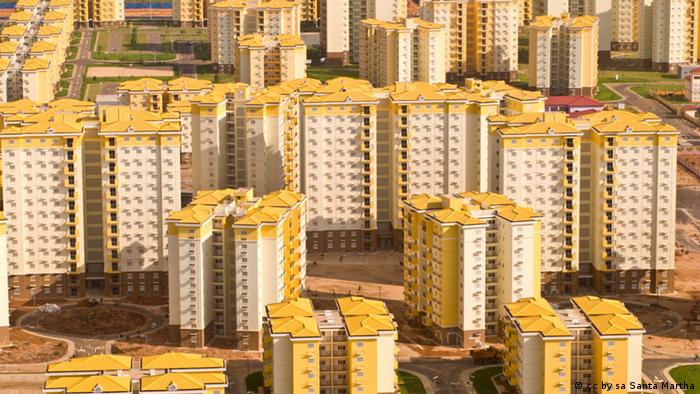 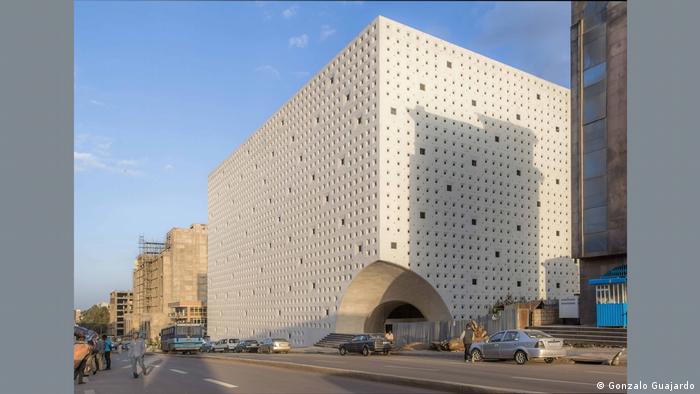 The Lideta Mercato shopping center in Addis Ababa, Ethiopia, designed by Xavier Vialta, looks like a chunk of Swiss cheese.

There are nevertheless impressive building projects that combine regional traditions with sustainable concepts. Located in Addis Ababa, Ethiopia, the Lideta Mercato is a roofed market conceptualized by Spanish architect Xavier Vilalta. The white building's facade is punctuated with square openings, inspired by the geometrical prints of Ethiopian women's traditional dresses. Like the maw of a giant whale, the fascinating entrance leads into an intricate labyrinth of stairs. Large solar panels on the roof and a rainwater harvesting system make this an ecologically ambitious self-sustaining building.

The majority of sub-Saharan building projects focus more on fundamental issues. Architect Francis Kere, who hails from Burkina Faso, attracted a lot of attention with his opera village project in Laongo. The building and cultural project initiated by German theatre director, Christoph Schlingensief, is still considered a model for the African architectural scene. It combines proven building concepts such as permeable facades and protruding roof structures that allow for natural ventilation. What is also remarkable about this project is the basic idea of involving village residents in the basic building processes. 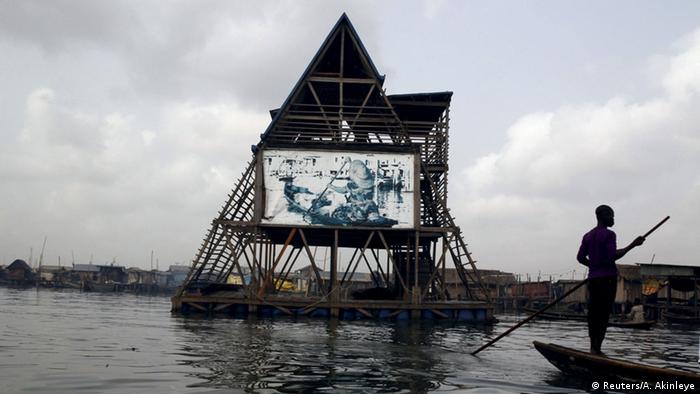 The Makoko Floating School anchored in the Lagos Lagoon, Nigeria, in February, 2016

The redesigning of megacities such as Lagos, which are dominated by huge slums, is a central theme of sub-Saharan architecture. A striking example is a project involving raftlike buildings in Lagos Bay. The Nigerian architect Kunle Adeyemi conceptualized the Makoko Floating School, a failed but nonetheless groundbreaking construction project.  The triangular floating structure is made of recycled material and has its own sewage system. With such structures, the Makoko district could be transformed from a slum into an ecologically sustainable livable neighborhood. This is still a dream, but also an important trend of current and vital architecture on the sub-Saharan map.