50 years ago: How the Shah of Iran's visit impacted German history

On June 2, 1967, student Benno Ohnesorg was killed during protests against the visit of the Iranian Shah. Historian Eckard Michels analyzed the events in his new book. 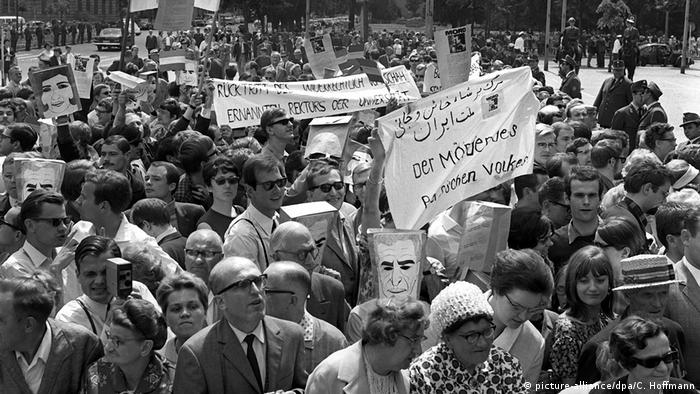 The German student movement of the late 1960s is generally remembered for the intensive protests of 1968. Yet the year 1967 was also a very decisive one.

The nine-day visit of the Shah of Iran Mohammad Reza Pahlavi and his wife Farah in May-June 1967 were accompanied by demonstrations throughout West Germany. It was during one such protest in West Berlin on June 2 that the student Benno Ohnesorg was shot by a policeman, Karl-Heinz Kurras. 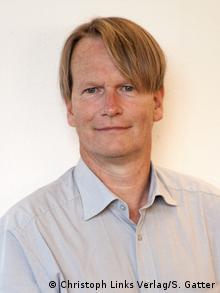 As historian Eckard Michels argues in his new book, "Schahbesuch 1967. Fanal für die Studentenbewegung" (The Shah's Visit in 1967. Beacon of the Student Movement), the events of June 2, 1967 were indeed a turning point in the history of the Federal Republic. DW caught up with Michels to discuss his insights into a pivotal historical moment.

DW: Professor Michels, what led you to focus on the lesser-known Iranian dimension of the student protest movement?

Eckard Michels:Much has been written about the June 2, 1967 events, but the actual issues behind the protests during the Shah's state visit to West Berlin have largely remained in the background.

The reasons that led the Shah to come to Germany, and why the students protested against this state visit instead of another dictator's, have never been researched in detail. I wanted to write an overall history of the June 2 events, with an emphasis on foreign policy and Iranian aspects of the story. 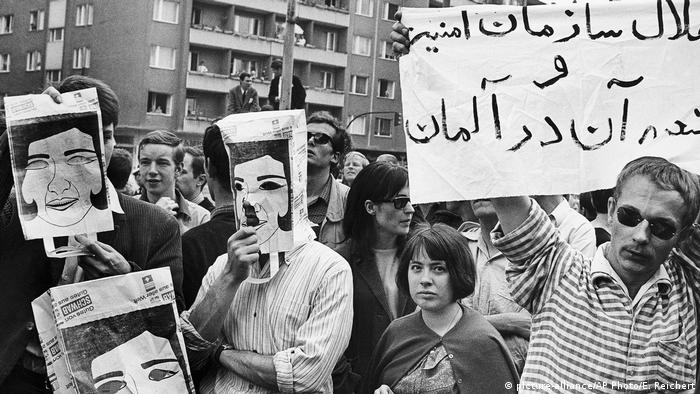 Some protesters wore paper bags with caricatures of Empress Farah

Which aspects of existing depictions of the student movement did you feel were incomplete?

For one, the Shah always appears as a background figure, as does Iran, even though such a state visit is always a two-sided matter between the host and the foreign head of sate.

The second aspect is the fact that the Iranian opposition in West Germany, which was mainly active among the students, does not appear at all in the portrayals of the June 2 events. It is rather a self-centered story, focusing on the activists of the Socialist German Student Union. The Iranian students are completely ignored, even though they were well organized in West Germany and they were the ones who incited their German fellow students to take to the streets for this event. 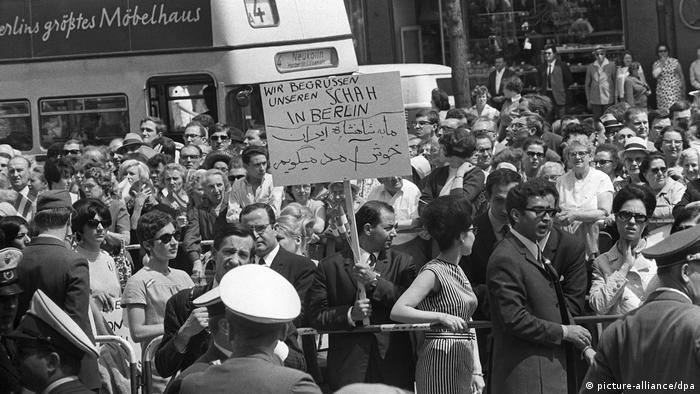 Other people were there in support of the state visit: "We welcome our Shah in Berlin," says this sign

Did your research lead you to reevaluate aspects of this moment in time?

I had certain preconceptions: For example, I thought that the West German students' knowledge of the situation in Iran and the Shah's regime had played a stronger role than was the case, so that was one of the assumptions I needed to revise.

Also, one of my initial intentions was to correct the image of the Shah's regime, believing the depiction of the brutal ruthless dictator was perhaps exaggerated, and that it led the West German students to act upon a myth. However, the existing bias towards the Shah's regime was confirmed through my research.

What also became clear is how clever the Shah was at manipulating the western countries against the Eastern Bloc to obtain financial and military support from both sides.

There were also some positive aspects under the Shah's rule, such as women's suffrage, which was established earlier in Iran than in Switzerland for example.

What were the aspects of his dictatorship that disturbed you the most? The SAVAK, the brutal secret police?

I knew about it previously, of course. Secret police organizations are in most dictatorships very brutal. What rather shocked me was the Shah's self-rule and how the media in Iran and the men's court were all sitting at his feet. He had not realized that Iran was only an average power in the Middle East and that his regime was not a continuation of the great Persian monarchies of antiquity. His megalomania kept growing from the 1960s to the 70s. I found this was one of the most repulsive aspects of his rule - on top of the fact that it was also a dictatorship under which people were tortured and killed.

Still it has to be mentioned that the relatively strong Iranian opposition in western countries in the 1960s and 70s led us to view the Shah's regime as the epitome of evil - although we now know that compared to Saddam Hussein's regime in Iraq or Gaddafi's in Libya, the situation is Iran was still relatively moderate. 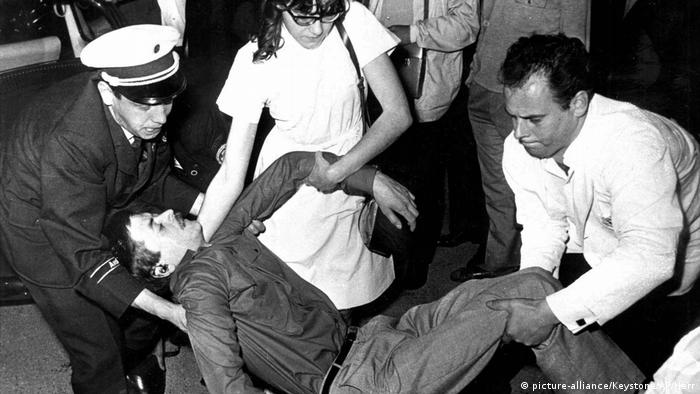 Student Benno Ohnesorg was shot by a policeman

Karl-Heinz Kurras, the police officer who shot the student Benno Ohnesorg, was many years later revealed to be an East German Stasi spy. Did the GDR have an interest in radicalizing the student movement or did it only profit from the events in the aftermath? 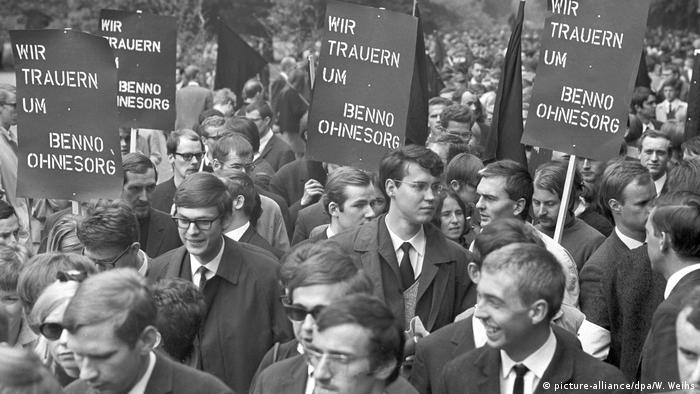 Why should Germans and Iranians read this book?

The book will appeal to Germans who are interested in the student movement and who would like to gain a broader perspective on the events that occurred on June 2, 1967 in West Berlin. Germans will also learn more about the Middle East and the role of Iran in the 1960s through the book.

Iranians should read the book because it demonstrates the role Iran played in Germany and the other way around: there were tight political and cultural relations between both countries.

It's also interesting that contemporary conflicts that are dealt with in the media, such as between Iran and Saudi Arabia or the struggle for dominance in the Persian Gulf, can all be traced back to the 1960s and 70s.