5 years on, Malaysia open to proposals to resume MH370 search

Five years after Malaysia Airlines flight MH370 disappeared, the Malaysian government has said it is open to continuing the search. Search efforts ceased in May 2018. 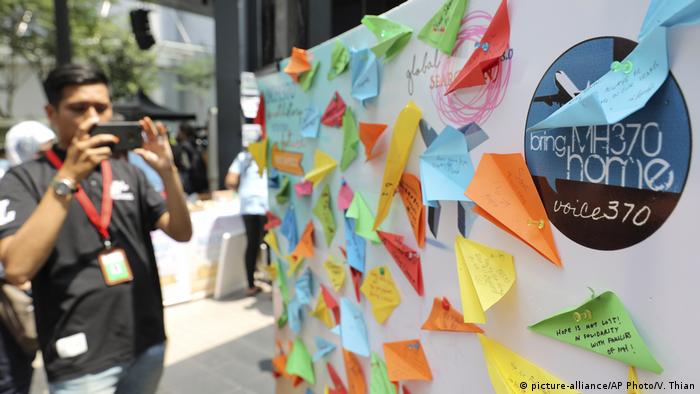 Malaysia's transport minister on Sunday said the government was open to proposals to resume the search for missing Malaysian Airlines Flight MH370, as family and friends of the passengers marked the fifth anniversary of the Boeing 777's disappearance.

There were 239 people on board MH370 when it vanished en route from Kuala Lumpur to Beijing on March 8, 2014. Its unexplained disappearance became one of the world's greatest aviation mysteries.

Malaysian Minister of Transport Anthony Loke planted a commemorative tree with the family members of passengers at an event to mark the fifth anniversary of the plane's disappearance, during which he said the government was willing to explore further search options.

"If there are any credible leads or specific proposals ... we are more than willing to look at them," Loke said.

Oliver Plunkett, the CEO of Ocean Infinity — a US exploration firm that has already carried out one search for MH370 — said in a video at a public remembrance event in Kuala Lumpur that the company hopes to continue the search with better technology obtained in the past year.

"If [Ocean Infinity] can convince us that the new technology can be more efficient in terms of the search, then we are more than willing to restart," Loke said.

Extensive searches have so far failed to find the plane. Of the 30 pieces of suspected aircraft debris that have been collected along the Indian Ocean coastline, only three wing fragments have been confirmed to be from MH370.

Five seconds later, the pilot responded with the last words to be heard from MH370: "Good night, Malaysian Three-Seven-Zero."

Minutes later, the plane's transponder was shut down, making it impossible to accurately track the aircraft's location on radar screens. Vietnamese air traffic controllers frantically tried to contact the cabin crew after the plane failed to report as scheduled, but they were met with radio silence.

That was the last anyone heard from the crew or passengers on MH370.

Hunt for Malaysia Airlines MH370 ends – what we know

The plane's disappearance sparked a $145 million (€127.5 million) search spanning 120,000 square kilometers (46,332 square miles) and involving multiple countries, including China, Australia and Malaysia, over initial suspicions the plane might have crashed somewhere in the South China Sea.

The search was called off after two years in January 2017, after no traces of the plane had been found.

Last year, Malaysia accepted a search offer from US seabed exploration firm Ocean Infinity, which deployed autonomous unmanned vehicles to trawl the depths of the sea floor in return for a multimillion-dollar fee if plane debris were found. The effort ended in May 2018.

A US company has ended its search of the Indian Ocean for the remains of the missing Malaysia Airlines plane. It disappeared in March 2014, with 239 people on board, en route from Kuala Lumpur to Beijing. (29.05.2018)

An independent report in the disappearance of Malaysia Airlines flight MH370 did not give any new clues as to the fate of the plane. Families of the victims expressed disappointment and anger about the results. (30.07.2018)

Tanzania votes in election marred by fraud accusations 8m ago