The Bremen Town Musicians is a universal tale of four neglected, itinerant animals who find work playing music in the harbor city. A story of the search for dignity, it has long inspired artworks now showing in Bremen.

"There once was a man who had a donkey." So begins The Bremen Town Musicians, the fairy tale published by the Brothers Grimm in 1819 as part of their famous collection of stories.

This 200-year-old classic, with its underlying themes of poverty, migration and solidarity, has never lost its relevance, and has been a particular source of inspiration for artists over the years. Whether through children's books, plastic or paintings, artists have dived into the tale's deeper layers.

The Kunsthalle Bremen is now showing a selection of such artworks in the exhibition "Animal Uproar: 200 Years of the Bremen Town Musicians in Art, Kitsch and Society." 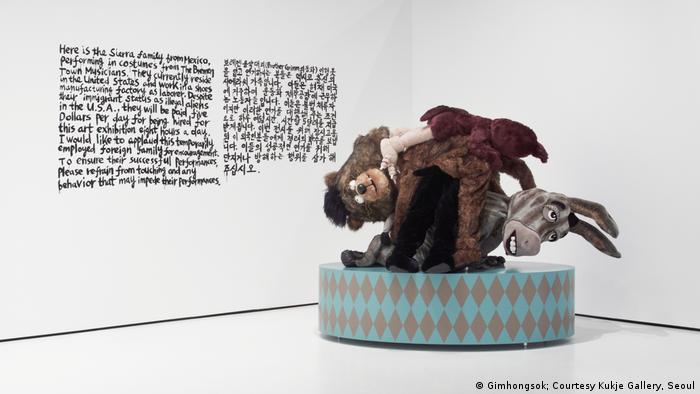 The tale of Bremen Town Musicians begins with an elderly donkey that, in the eyes of his owner, has grown too old and weak to be of any use and therefore should be killed. The donkey runs away and eventually meets a dog, a cat and a rooster that all face similar unhappy fates.

"Come along with us," they say to each newcomer. "You can find something better than death everywhere." The furry and feathery band-of-four decide to go to the northwest port city of Bremen and become musicians.

According to the Kunsthalle show's curator, Jennifer Smailes, the animals represent "a social utopia." In the fairy tale, she explains, they represent farmhands and household staff who are old, impoverished and no longer able to work and join together to form a strong collective. The story shows that strategic alliances are important to achieving goals, such as life with dignity, she adds.

Together, by standing on one another's backs, the four characters manage to scare off a group of robbers who don't know what the strange apparition is.

The Bremen animals are funny and colorful, and so is the art that deals with their story. The animal-pyramid has particularly resonated with artists, and multiple exhibits in Bremen's Kunsthalle reflect this fascination.

One eye-catching work is on display outside the museum: "Pinpointing Progress" from the Belgian artist Maarten Vanden Eynde. It's a pyramid made of vehicles stacked on top of one another like the shells of insects on a skewer.

Inside, the pyramid theme is further interpreted in works by artists such as Italian Maurizio Cattelan, South Korean Gimhongsok, Briton Martin Creed, and America's Jeff Koons. 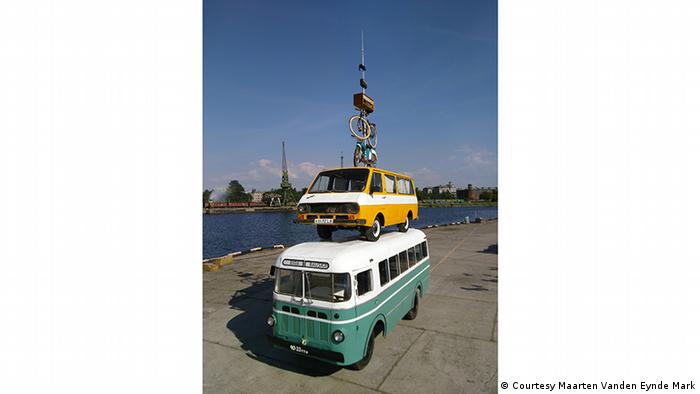 The Kunsthalle has gathered together a total of 300 objects for the exhibition, from artworks to souvenir kitsch and including the oldest statue of the Bremen Town Musicians, from the council wine tavern in the basement of city hall.

But it's another sculpture that is more famous internationally: a life-size animal pyramid in bronze by sculptor Gerhard Marck that has stood outside the city hall since 1953. Simple and straightforward, the sculpture draws tourists daily. Most of them take a moment to touch the donkey on the leg — it's supposed to bring good luck!

"Animal Uproar: 200 Years of the Bremen Town Musicians in Art, Kitsch and Society," is on display at the Kunsthalle Bremen through September 1.

The Brothers Grimm published the first part of their book of legends 200 years ago. That anniversary is now being celebrated along the German Fairytale route. The festivities kick off in the town of Hamelin. (29.06.2016)