First shown in San Francisco, an exhibition taking a look at Islamic fashion has provoked strong reactions ahead of its opening in Frankfurt. "Contemporary Muslim Fashions" confronts stereotypes on both Islam and style. 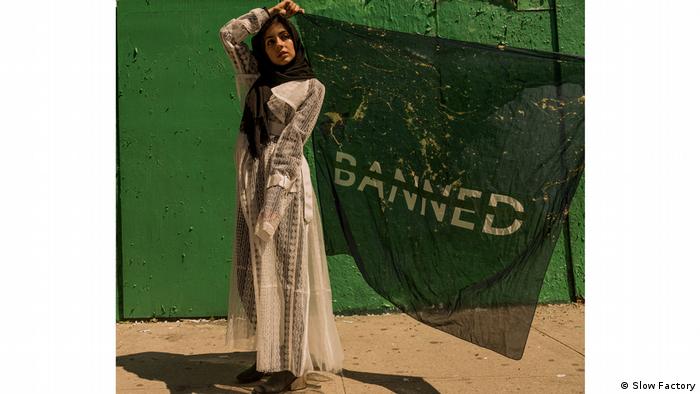 Muslim head coverings have always been a controversial topic, as they embody so many issues, whether women's rights worldwide or Western prejudice and discrimination against Muslims.

Now that the first exhibition dedicated to fashion consciousness of women in Islam is opening at Frankfurt's Museum Angwandte Kunst, the debate surrounding headscarves has been rekindled in Germany.

Titled "Contemporary Muslim Fashions" and first shown at the M.H. de Young Memorial Museum in San Francisco, the exhibition, however, does not aim to answer the numerous political and social questions related to hijabs or burkinis.

"The focus of the exhibition is really fashionable modest dress and what we're trying to show in the exhibition is that there is a lot of choice for the mass of Muslim women," said Jill D'Alessandro, curator of the "Contemporary Muslim Fashions" exhibition in San Francisco.

"Contemporary Muslim Fashions" is an opulent exhibition that showcases around 80 different styles and outfits. Many items are on loan from Middle Eastern and Asian designers. Caftans, headscarves and colorful designer dresses can be seen alongside the controversial burkini and the sports hijab made by Nike.

The coordinators of the German exhibition have already started receiving racist hate mail ahead of the opening of the exhibition on Thursday, which is why the Angwandte Kunst museum is introducing bag checks and body searches for the duration of the show, "for the security of all visitors and employees," museum director Matthias Wagner K told German press agency DPA.

On the other end of the spectrum, weeks ahead of the show, activists who call themselves "Migrants for secularity and self-determination" have published an open letter in German feminist magazine Emma, in which they state that they are "appalled" by the fact that the exhibition is being shown in Frankfurt.

"This exhibition, which supposedly depicts religious dress requirements as fashion, is a slap in the face of domestic and foreign women's rights activists," the letter states. The group, composed of Iranian refugees, also reminds people that "Every year, thousands of women in Iran are punished for violating this dress code."

Yet even if the authors of the open letter say that "describing these dress requirements as 'modest fashion' is cynical," the term wasn't invented for the exhibition — and it is not about to disappear soon. 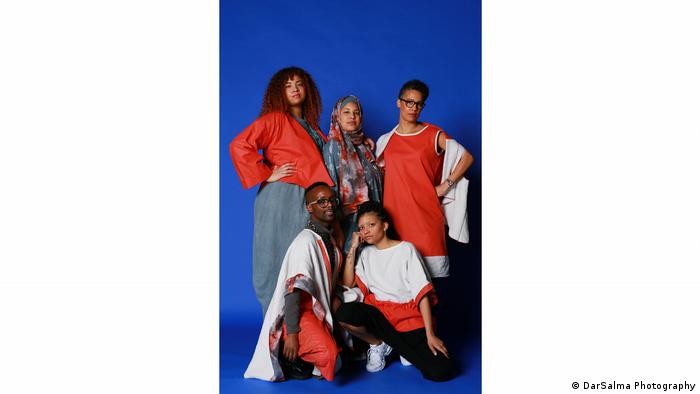 Modest fashion can take different forms, as designer Naomi Afia shows with her collection 'Our Bodies, Our Business'

The expression "modest fashion" was developed by Muslim fashion designers — a reaction to the contradictory views within the religious community about women and modesty.

It is an industry that has been expanding over the last several years. "Muslim women spend $44 billion (€37 billion) on fashion annually," says Jill D'Alessandro, and the trend is rising.

The exhibition explores a zeitgeist spurred on by new fashion magazines such as Vogue Arabia, and also by influencers on social networks. There, a new Muslim coolness is being put on show by "hijabistas," the Muslim answer to "fashionistas," and so-called "mipsterz," Muslim hipsters.

Read more: Can Instagram fashionistas help save the planet?

Major brands and designers have long since adopted this trend. In 2015, clothing retailer H&M featured a model with a headscarf in an advertisement for the first time. In 2016, fashion company Dolce & Gabbana launched a collection for Muslim women. Japanese chain Uniqlo also has its own line for Muslims.

The exhibition also features designs by Oscar De La Renta and Dolce & Gabbana: Western designers who are also orienting themselves towards Muslim fashion. 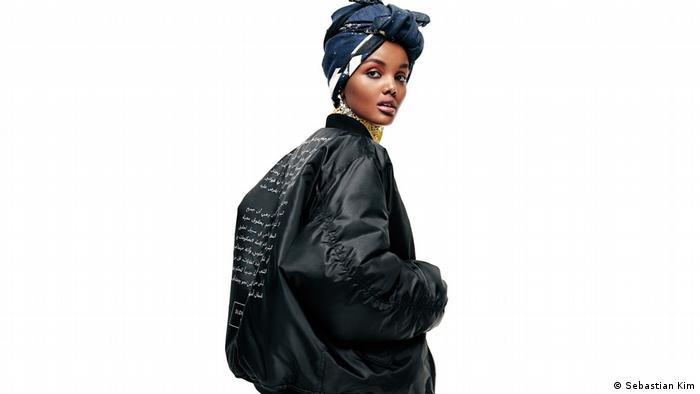 Some of the designs featured make political statements, like this bomber jacket with the US Constitution scripted on the back

The idea for the exhibition came from Austrian museum director Max Hollein, who formerly headed the San Francisco Museum of Fine Art and, before that, served as the director of the Städel Museum in Frankfurt am Main. Planning began in 2016, shortly before Donald Trump was elected US president. The show was held in the US during a period when anti-Islamic attitudes were becoming increasingly visible and voiced in America.

A similar polarization of attitudes is noticeable in Germany today, and all questions related to the integration of refugees remain a headline-grabbing topic.

But "Contemporary Muslim Fashions" does not want to be seen as a reaction to this. "We don't want to solve problems, but to offer new perspectives on a very exciting part of the fashion world that has long been ignored by the Western world," says curator D'Alessandro.

It remains impossible, however, to blindly believe this is an exhibition about fashion only.

On the one hand, without having seen the show, human rights experts in Germany feel that it is a "slap in the face of girls and women worldwide who don't want to wear the headscarf or want to take it off," as Inge Bell, director of the German branch of the organization Terre des Femmes told Vogue Germany.

On the other hand, Muslim women who saw the exhibition in San Francisco found it empowering, as CNET news reporter Abrar Al-Heeti wrote: "As a 25-year-old Muslim woman who loves fashion and wears the hijab, or headscarf, I've seen plenty of head coverings. But never anything like this. It's a statement of resistance, a rebuttal of the idea that Muslim women are weak and oppressed."

"Contemporary Muslim Fashions" is on show at the Museum Angewandte Kunst in Frankfurt from April 5 through September 2019.

Iranian moral police have uncovered an "un-Islamic" criminal modeling network on the picture-sharing website Instagram. Eight people were arrested for modeling or publishing photos of women without headscarves. (16.05.2016)