Rumors on social media that the border between Greece and North Macedonia was open convinced hundreds of migrants to make the trek. The Greek Migration Ministry said people had been lured by "fake news." 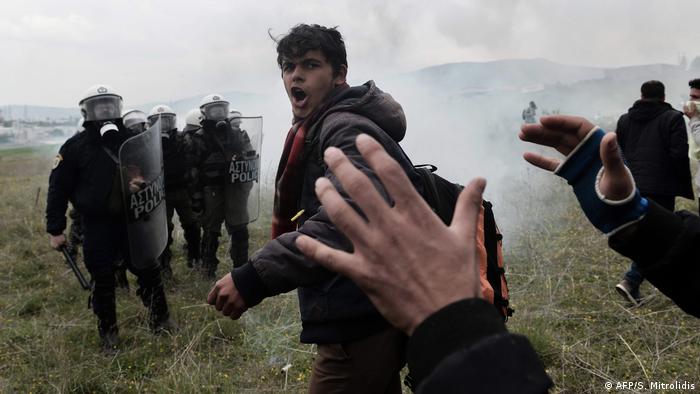 Police and migrants clashed in a field outside a migrant camp near the northern Greek city of Thessaloniki on Saturday.

Some 2,000 migrants had gathered in the field before some of them began throwing stones at police officers trying to control the crowd with tear gas and stun grenades, according to Greek media.

The crowd said they wanted to cross into North Macedonia. Many of them had arrived at the camp on Thursday and Friday amid rumors on social media about the border being open.

The Diavata camp is some 60 kilometers (37 miles) south of the border, which forms part of the so-called Balkan migration route for entering central and northern Europe.

Hope for reduced tensions on Sunday

The Greek Ministry of Migration said it had told the migrants that the border was closed and that they could return to their accommodation centers elsewhere in Greece on government buses.

Many migrants have so far ignored that call, but the ministry said it hoped most people would return voluntarily by Sunday.

The number of migrants reaching central and northern Europe via the Balkan route fell significantly after a border fence was installed along the Greek-North Macedonian border in late 2015.

More than a million people used the route to reach Germany during the height of the migration crisis in the second half of 2015.

Greece currently houses more than 70,000 migrants across the country.