Zimbabwean pastor Evan Mawarire, famous for launching the #ThisFlag protest, has been denied bail by a Harare court. He was arrested on arrival from the US and is being charged with subverting the government. 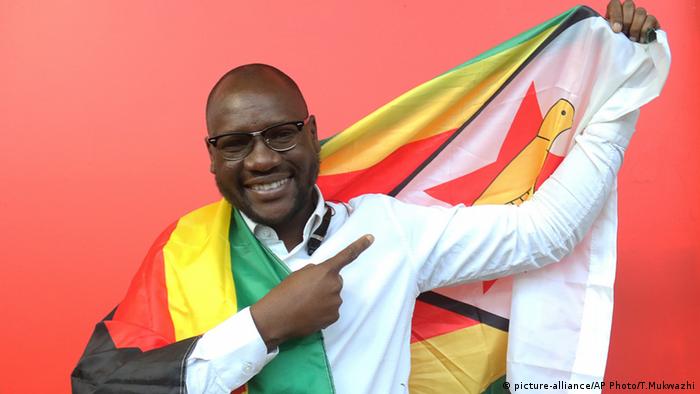 A Harare court on Friday denied Evan Mawarire, a Zimbabwean pastor and activist, bail. The judge said that Mawarire had to remain in custody as he was at risk of flight.

"Mawarire will be back in court on February 17 for further remand," DW reporter Columbus Mavhunga explained from outside the court. But he noted that Mawarire's lawyer Harrison Nkomo was planning to take the case to Zimbabwe's High Court next week.

Pastor Evan Mawarire was initially detained by police on his return from the United States on Wednesday. "He has been charged with subverting a constitutionally elected government, the very charge he was acquitted of last year," Nkomo said.

Speaking to reporters, the police explained their side of the story. "He skipped the country, but as you know, going to America was never going to wash away his crimes. We were waiting for him to return," police spokesman Charity Charamba said.

Mawarire's arrest was criticized by Amnesty International's deputy regional director for southern Africa, Muleya Mwananyanda. He called the arrest a sham. Thor Halvorssen of the New York-based Human Rights Foundation (HRF) also criticized the Zimbabwean government for what he called a "zero tolerance" policy for the most basic acts of dissent. "Mawarire's alleged 'seditious' act was calling for Zimbabweans to skip a day of work so they could peacefully convey their disapproval to the government. He should be released immediately and all charges against him should be dropped," Halvorssen said.

A pastor turns to activism

Mawarire initially came into the international spotlight in April 2016 for posting spoken-word videos on Facebook and other social media platforms. "If I have crossed the line, then I believe it was long overdue. I'm not a politician, I'm not an activist...just a citizen #ThisFlag," Mawarire wrote at the time on his Facebook page. He called on Zimbabweans to reclaim their flag and national pride. Via social media, he organized a day-long stay-at-home protest that effectively shut down business major cities.

The 39-year-old pastor and activist left Zimbabwe six months ago. He spent several months in the United States. At the time of departure, he said that he feared for the safety of his family. Before he left Zimbabwe, he was shortly detained by the police and initially charged with public violence. The prosecutors later changed the charges to attempting to overthrow Zimbabwe's government. Mawarire was freed by a judge who said that the prosecutors' attempt to change the charges was unconstitutional.

Shortly before his return to Zimbabwe, Mawarire spoke to the Daily Maverick, a South Africa-based online paper, about his decision to return home. "Zimbabwe is home for me and my family. That's the place where we have a right to be without acquiring a visa; we are citizens of Zimbabwe," he told the paper.

Zimbabwe has been ruled by 92-year-old President Robert Mugabe and his party, ZANU-PF, for nearly 30 years. Mugabe had said that Mawarire and others who are unhappy with the situation in Zimbabwe should leave the country. During the last general elections held in 2013, international observers from the EU and the United States voiced grave concerns over irregularities and a lack of transparency during the polls.

Anti-government activists in Zimbabwe vow to challenge a police ban on protests in the high court. Meanwhile, demonstrations have been planned despite the ban. (16.09.2016)

Zimbabwe has begun issuing a surrogate currency - $2 and $5 denomination 'bond notes' - in a bid to ease a cash shortage. The move has prompted fears of a return to hyperinflation. (28.11.2016)

Police in Zimbabwe fired tear gas on Friday at anti-government protesters gathering for a march. But discontent with Mugabe is now being expressed in a myriad of different forms going beyond classic street protest. (26.08.2016)