Zimbabwean President Emmerson Mnangagwa marked Africa Day by unveiling the statue of a 19th century anti-colonialist who became a national heroine. Mnangagwa vowed to press Britain to return the skull of Mbuya Nehanda. 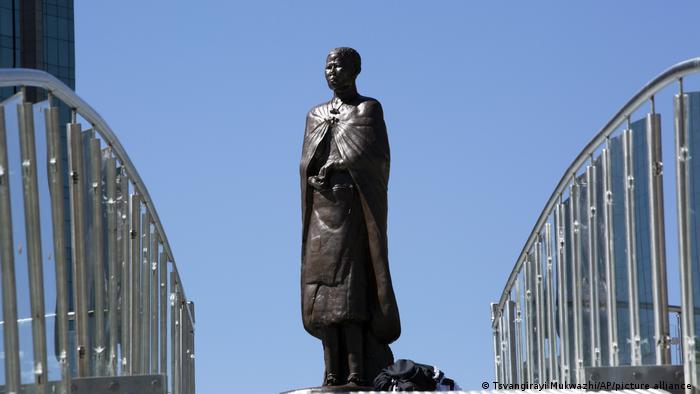 Nehanda was hanged for leading resistance to white occupation

Zimbabwean President Emmerson Mnangagwa on Tuesday uncovered the towering bronze statue of a 19th-century Black anti-colonialist heroine, calling her "an inspiration to all Zimbabweans and all Africans."

Mnangagwa unveiled the 3-meter high statue of Mbuya (meaning "Grandmother") Nehanda in the center of the capital, Harare, to mark the Africa Day holiday.

The statue "is a declaration that we stand proud of our history and identity," said Mnangagwa.

Nehanda — whose full name was Nehanda Charwe Nyakasikana — was an influential spirit medium who rallied people to fight against land seizures by colonialists.

She was hanged in 1898 on charges of murder and for leading a rebellion against white occupation by Britain. However, she became a symbol of resistance during the struggle that led to the independence of Zimbabwe in 1980 and the end of the white-minority ruled country of Rhodesia.

At the event, close to the place where Nehanda was executed, Mnangagwa vowed to press for the return of her skull from Britain.

It was taken there as a war trophy and is currently held London's Natural History Museum, along with the skulls of other "first chimurenga" — the name given to the 19th-century uprising against white settlers.

The unveiling comes almost a week after an Oxford University college said it would not take down a controversial statue of the 19th-century colonialist Cecil Rhodes — after whom Rhodesia was named.

Oriel College voted in favor of removing the statue last year but reneged on the plan due to "regulatory and financial challenges."