Zambians have been voting for a successor to President Michael Sata. Reports of late deliveries of election materials triggered allegations of fraud, but police told DW they had received 'no reports of violence.' 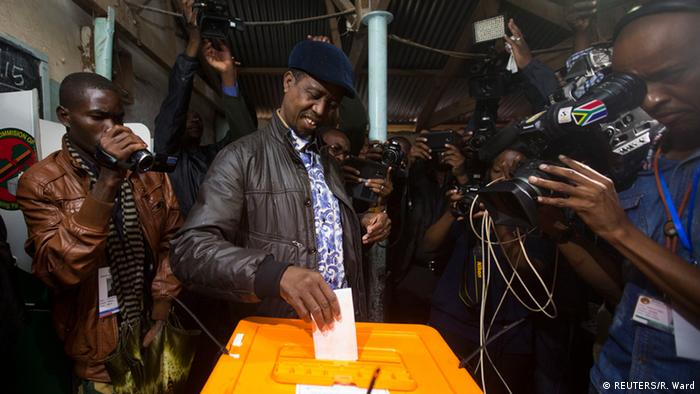 Edgar Kungu: 'I will contiune where the president left off'

Presidential hopeful, Defense Minister Edgar Lungu of the ruling Patriotic Front party (PF), which was founded by the late Michael Sata, voted in the capital Lusaka as his supporters cheered him on in the rain.

"I have promised Zambia that I will continue where the president left off," Lungu said in a reference to Sata.

The leader of the opposition United Party for National Development (UPND), Hakainde Hichilema, the main challenger to Lungu, accused the Electoral Commission of Zambia of delivering election material late in the Western province.

"Why are there no ballot papers in our strongholds, someone is scheming around. It's fraud," Hichilema told reporters after casting his ballot at a school in Lusaka's affluent Kabulonga suburb. 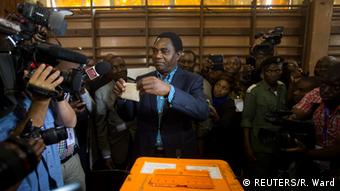 "It's like there is a trick to steal votes, this is unacceptable," political activist Emma Mwanza told DW on hearing of the allegations.

Voting, however, appeared to be proceeding peacefully. Police spokesperson Charity Chanda told DW "we, as Zambia police, have not received any report of violence."

Polling stations opened at 6 a.m. In the capital Lusaka, hundreds of voters were already lining at 4 a.m.

One early riser, Rosie Chishimba, told DW outside the polling station "Yes, I've voted. I didn't sleep. I woke up at 3 am. I want to change this government," she said referring to the PF.

70-year-old Lucy Malama spoke at length about her frustrations at the slow pace of change in her country.

"Zambia is still in the wilderness, so we want to move forward this time so that we improve our lives. We want all our children to go to school, we want equal rights, equal food, equal health services, we want to get out of this wilderness," she said.

Expect the loser to concede defeat

It took 29-year-old Jeff Katongo just five minutes to cast his vote."There weren't any inconveniences. They just check to see if you're eligible to vote, then you proceed to vote," he said.

Katongo said he believed candidates would abide by the rules of democratic governance.

"I expect the one who loses to accept defeat," he said. 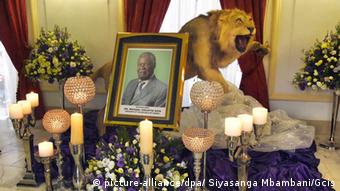 With no reliable opinion polls in the southern Africa country, few experts are willing to pronounce on who will win the poll.

Some voters were less reserved and quick to name their preferences. "I'm behind Edgar Lungu. He's a humble man. He's one of us," street trader Elvis Nyambe told Reuters as he voted in Lusaka.

'Get us out of poverty'

Joyce Mainza, a mother of four, said she had voted for Hichilema, Lungu's opponent, because he had laid out clear policy plans.

"We need someone who will get us out of poverty," she said.

That would strike a chord with 60-year-old voter Ivy Mulusa. She told DW that prices had gone up over the last few years and she hoped that in future "at least a bag of mealie-meal should be affordable by each and every household in Ghana."

World Bank figures say at least 60 percent of Zambia's population of about 15 million lives below the poverty line.

Results of the elections are expected within 48 hours following the closure of polling station at 6 p.m local time on Tuesday.

Voters in Zambia are going to the polls to elect a new president. The winner is to replace the late former president, Michael Sata, who passed away last autumn. (20.01.2015)

The people of Zambia go the polls to elect a new president on Tuesday following the death of Michael Sata in October 2014. Campaigning was 'by and large in a peaceful manner.' (19.01.2015)

Zambians go to the polls on January 20 to elect a successor to the late Michael Sata. Analysts say the ruling PF is the favorite to win but the opposition should not be underestimated. (16.01.2015)

After five failed campaigns, Zambian politician Hakainde Hichilema has finally won the presidency. But he has to deal with a devastated economy. Experts believe that Hichilema's business background could prove pivotal.