Voters in Zambia are going to the polls to elect a new president. The winner is to replace the late former president, Michael Sata, who passed away last autumn. 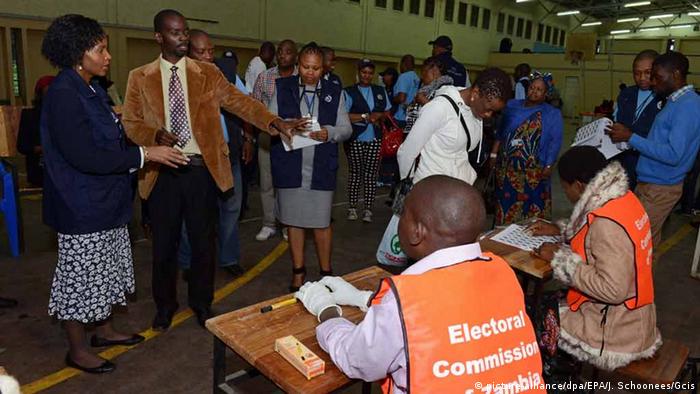 Voters in Zambia are going to the polls to elect a new president. The winner is to replace the late former president, Michael Sata, who passed away last autumn. There was no clear frontrunner as Zambians lined up at polling stations to cast their ballots on Tuesday, as there were no reliable opinion poll figures available.

However, only two of the 11 candidates are seen as having a chance of winning the election. They are Edgar Lungu, the leader of Sata's governing Patriotic Front (PF), and Haikainde Hichilema of the opposition United Party for National Development, who is also one of Zambia's wealthiest businessmen.

Lungu, whose campaign has focused on mobilizing the grassroots support that brought Michael Sata to power in the 2011 presidential election.

"Michael Sata is still in the PF. We shall honor him to the letter," Lungu told supporters at his final campaign rally in the capital, Lusaka.

Hichilema, on the other hand, has played up his experience as a businessman, arguing that he has what it takes to attract foreign investment and diversify the economy of Zambia, which relies on copper for 70 percent of its income through exports.

"When your car has a problem you go to a mechanic. You need an economist like myself to fix the economy," Hichelema told supporters at his final campaign event on Monday.

If Hichelema does win, though, he will have little time to "fix the economy," as whoever is elected will only serve for the remainder of Sata's term, which ends late next year.

Michael Sata died at the age of 77 while in office last October, following a long illness. He was replaced on an interim basis by his former vice president, Guy Scott, the country's first white leader in two decades. Scott was not eligible to run in Tuesday's presidential election as his parents were not born in Zambia.

Zambians go to the polls on January 20 to elect a successor to the late Michael Sata. Analysts say the ruling PF is the favorite to win but the opposition should not be underestimated. (16.01.2015)