Yemen's prime minister is back in Aden after months of working in exile from neighboring Saudi Arabia. The government is trying to re-establish authority as it battles the Houthi rebels for control of the country. 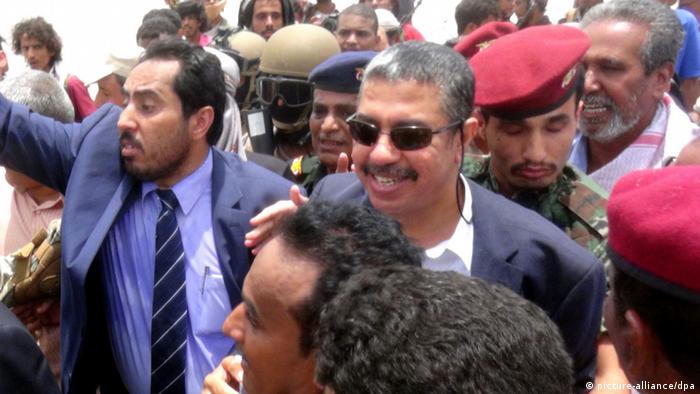 Khaled Bahah on a visit to Aden in August, after pro-government forces repelled the Houthi rebels from the city

Yemeni Prime Minister Khaled Bahah was accompanied by several government ministers when he arrived in the southern port city of Aden on Wednesday.

"The return marks the start of the government's exercise of its tasks to run the country's affairs and restore legitimacy," a security official told German press agency DPA.

The administration has been in exile in the Saudi capital, Riyadh, since March, when the Houthis advanced south and attacked Aden. Local fighters backed by Saudi-led forces drove the Shiite rebels out of the strategic port in July, leaving chaos in their wake.

There have been reports of al Qaeda militants entering the city, while locals complain authorities have been too slow to restore basic services and clean up debris and garbage in the street.

"The decision of the government to return to Aden has to be taken immediately before the collapse of the security situation and services," said Lutfi Shatara, the leader of Herak, a local political coalition.

The Houthis, who are fighting alongside forces loyal to ousted former President Ali Abdullah Saleh, have sought to expand their control southwards from their northern base over the past several months. They still control large parts of Yemen, including the capital, Sanaa.

A Saudi-led coalition of Gulf states launched airstrikes in late March in an attempt to stop the rebels' advance and to restore exiled Yemeni President Abed Rabbo Mansour Hadi to power. Hadi remains in Saudi Arabia.

According to the UN, more than 4,300 people have been killed in the Yemen conflict since March. The violence has also prevented the delivery of aid and vital food supplies, with the World Food Programme warning that the impoverished Arab state is on the brink of famine.

Yemen's exiled government pulls out of peace talks with rebels

Yemen's government says it won't participate in UN-brokered peace talks with Houthis unless the rebels withdraw from conquered territory. The talks were to be the second major diplomatic push to end the war. (13.09.2015)

Saudi-led airstrikes against Houthis have wounded 17 people in Sanaa, including several children. The air assault was part of a retaliatory campaign after rebel forces had killed scores of coalition fighters on Friday. (06.09.2015)