The leader of al Qaeda on the Arabian Peninsula has been killed in a drone strike in Yemen. Nasir al-Wahishi spent years as a top aide to Osama bin Laden. 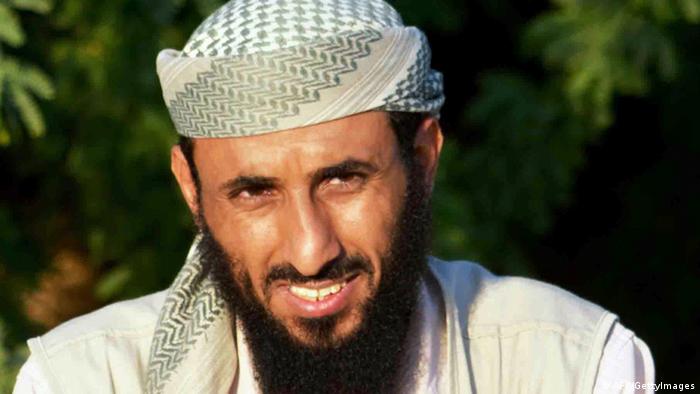 Nasir al-Wahishi - the second in command of terror network al Qaeda worldwide behind Ayman al-Zawahri and himself leader of the Yemen-based al Qaeda on the Arabian Peninsula (AQAP) - was reported killed in a suspected drone strike in the country's south-east.

The strike took place on Friday in the Hadramawt region, according to broadcaster CNN on Monday citing two Yemeni national security officials, and local sources close to al Qaeda quoted by the news agency dpa. A source in the coastal city of Mukalla told the DPA news agency the strike happened there.

Al Qaeda has confirmed that al-Wahishi was killed in a video statement.

"We in al Qaeda in the Arabian Peninsula mourn to our Muslim nation ... that Abu Baseer Nasir bin Abdul Karim al-Wahishi, God rest his soul, passed away in an American strike which targeted him along with two of his mujahideen brothers, may God rest their souls," Khaled Batarfi, a senior member of the group, said.

The group had also appointed its former military chief Qassim al-Raymi as al-Wahishi replacement, he added.

United States authorities are still working to confirm the report about the his death.

Al-Wahishi's death is a major blow to AQAP, one of the most active branches of the international terror group al Qaeda which claimed responsibility for the January attack on Paris-based satirical magazine Charlie Hebdo.

According to Gregory Johnsen, who wrote a book on AQAP, al-Wahishi was born in Yemen and spent years in Afghanistan from the late 1990s, serving as an aide to Osama bin Laden until 2001 when US troops closed in on al Qaeda following the September 11 attacks. According to Johnsen, al-Wahishi was a key figure in building up the organization in Yemen.

The reports come shortly after peace talks opened in Switzerland where Yemen's warring factions have been called upon to agree to a humanitarian pause. A Saudi-led coalition has been bombing the country since March in an effort to stop Houthi rebels, who had taken over large swathes of the country.