Yemen ceasefire pushed back to coincide with peace talks

A ceasefire planned for midnight has been postponed in Yemen as violence went unabated in the country's south. A seven-day truce will instead begin with peace talks in Switzerland on Tuesday morning. 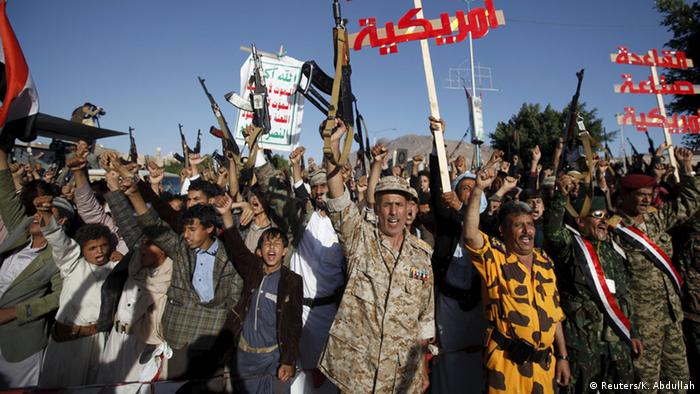 Houthi loyalists shout slogans during a demonstration against Saudi-led strikes

The Saudi-led coalition, which has backed internationally recognized President Abed Rabbo Mansour Hadi in the Yemen conflict, announced late on Monday that a long-awaited ceasefire will begin Tuesday morning instead of at midnight as originally planned. The change in plans, reportedly requested by Hadi himself, now coincides with the start of UN-brokered peace talks in Geneva.

According to the coalition, Hadi said that his forces and their supporters would lay down their arms at 9 am local time on Tuesday, and begin a 7-day true that will be "renewed automatically if the other party commits to it." The president's statement maintained, however, that he "reserves the right to respond in case of any violation."

A break in the fighting will be a welcome respite for the estimated 80 percent of Yemenis who require humanitarian aid. The poorest nation in the Arabian Peninsula, Yemen has been in a near constant state of violence since rebel Houthis, who have long complained of marginalization, overtook the capital Sanaa in September 2014.

International terror organizations like al-Qaeda and "Islamic State" (IS) have taken advantage of the chaos to expand their influence in Yemen. Jihadists have launched attacks on both sides of the conflict.

Violence continues to the last minute

Previous ceasefire attempts in Yemen have not held, and this time both sides have traded allegations that the other does not intend to stick to any peace deal. Both Hadi and the Houthis, many of whom remain loyal to ex-President Ali Abdullah Saleh, will be represented at the talks. But the rebels have not indicated their level of determination to achieve a truce.

According to witnesses, even with the prospect of a temporary ceasefire, violence continued between coalition forces and the Houthis in the southern Daleh province all day Monday, and two Hadi loyalists were killed in clashes in the southwestern Taez province.

The warring factions in Yemen are to resume ceasefire negotiations. Earlier talks failed in the many-sided domestic and foreign conflict. Al Qaeda and the "Islamic State" are trying to take advantage of the conflict. (08.12.2015)