′Yanukovych Leaks′ documents abuse of office | Europe | News and current affairs from around the continent | DW | 16.03.2014

Fugitive Ukrainian President Viktor Yanukovych led a lavish lifestyle - allegedy financed by money laundering and bribery. Journalists are analyzing documents he left behind - and putting them online as well. 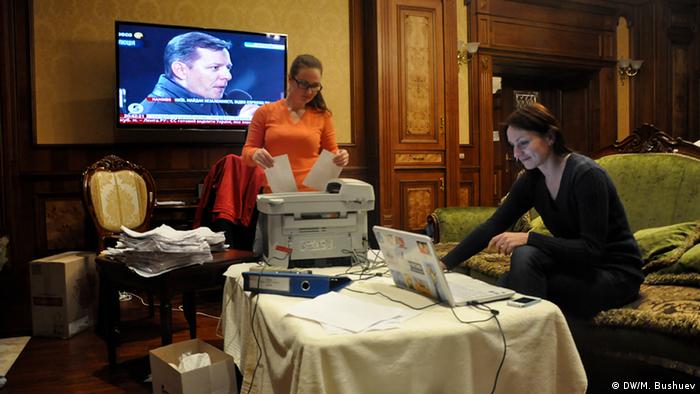 "If Yanukovych had run his country's affairs like he did his private life in Mezhyhirya, we would be a rich country," Ukrainian journalist Anna Babinez said jokingly. She knows what she's talking about: for the past three weeks, Babinez and more than a dozen other journalists have been intensively studying documents and records found in the former presidential residence.

Former President Viktor Yanukovych built the vast estate north of Kyiv during his years in power. It was covered by a veil of secrecy. The public got its first look at it after he fled Kyiv in late February. Visitors were astonished by the luxurious amenities of the residence - chandeliers, ostentatious decorations, jewelry and cars. But journalists were more interested in where Yanukovych, who received an annual salary of 83,000 euros as president, got the money for all the luxury. 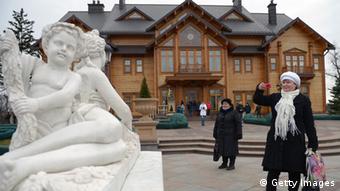 Visitors to Mezhyhirya often likened it to Disneyland

Thousands of documents are online

On the day the president fled, February 22, an employee of the residence told journalists that papers were floating in the adjacent Kyiv reservoir. They were fished out, dried, analyzed and posted on the Internet. And so began "Yanukovich Leaks."

Hundreds of folders containing more documents were later found in one of the buildings on the site. The project website now contains more than 9,500 scanned originals. The documents provide information about Yanukovych's personal life and about who belonged to his inner circle.

Trails leading to Austria and Liechtenstein

The majority of the documents found refers to a dozen companies involved in the operation of the presidential residence. The most important of them was "Tantalit," which was the formal owner of most of the 140-hectare site. It also built various buildings on the estate. Until now, little was known about this company. Now there is plenty of material. 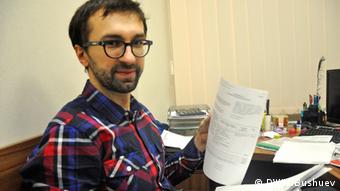 Tantalit was owned by an Austrian company, which in turn was owned by a British firm. This was controlled by a trust in Liechtenstein. The director of Tantalit was Pavel Litovchenko, "a lawyer for the Yanukovych clan," Serhiy Leshchenko of the online newspaper "Ukrainska Pravda" told DW. Six months ago, Tantalit sold its share in Mezhyhirya - but to a company linked to the brother of Serhiy Kliuev, the former head of the presidential administration. "But Kliuev was only the nominal owner. Yanukovych himself really controlled the estate," Leshchenko said.

No one can yet say exactly how much construction of the residence cost. Journalist Anna Babinez assumes a sum in the billions. "The curtains in one room alone cost 80,000 euros," she said. "Thousands of people worked there with only one task: Everything should please the president." 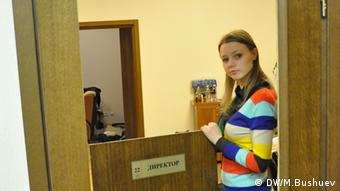 Anna Babinez is looking into the president's extravagant expenses

A front for money laundering

The journalists at Mezhyhirya have been divided into working groups. Some are examining the expenditures for Yanukovych's lavish lifestyle, while others are looking for the sources of money.

"I studied a folder that gives the information on Tantalit's revenues in 2011. They came mainly from the UkrBusinessBank, which in reality belonged to the Yanukovych clan. Based on this folder alone, you can see how money was laundered within the clan as it was shifted back and forth. They probably never thought anyone would ever get their hands on these documents," journalist Andriy Bashtoviy said.

Babinez is investigating the hunting club in Sukholuchye, 20 kilometers away from Mezhyhirya. "We found documents about the membership fees, which amounted to 50,000 euros per year." Only people in Yanukovych's inner circle belonged to the club. Babinez assumes that all the fees for its activities flowed illegally to the president. "But that still needs to be clarified," she said.

At the same time, the documents also show how poorly the workers on Mezhyhirya were paid. They received the equivalent of between four and seven euros per day, Baschtowy said. 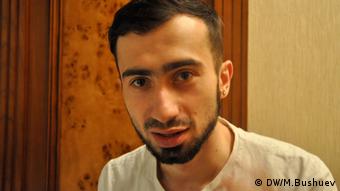 Andriy Bashtoviy is looking for evidence of money-laundering

Abuse of office on a grand scale

The originals of the documents that the fugitive president left behind have all now been passed to the prosecutor's office. The journalists work only with scanned copies. Leshchenko said the documents provide evidence for "ten felonies for Yanukovych." So far, the prosecution has initiated proceedings on two charges: money laundering and misappropriation of property through serious abuse of office.

Other files will be added to the "YanukovichLeaks" website in the coming weeks and months. "The goal of the project is to make all the found documents available to the public," Babinez said.

Ahead of the secession referendum, it is almost certain that Crimea will vote in favor of uniting with Russia. No voices of opposition have been heard on the peninsula in recent days. (15.03.2014)

'I'm afraid what will happen when Paralympics end'

Ukrainian parliamentarian and president of the country's national Paralympic Committee, Valeriy Sushkevych , talks to DW about his fears for the country once the Sochi Games are over. (15.03.2014)

President Vladimir Putin aims to create an Eurasian Union where the Soviet Union once reigned. But Moscow's intervention in Crimea could make former Soviet republics think twice about deeper integration with Russia. (15.03.2014)