The discovery of a bomb buried near the Rhine River has prompted the largest evacuation in Cologne since World War II. Experts are due to deactivate the 1,000-kilogram device shortly. 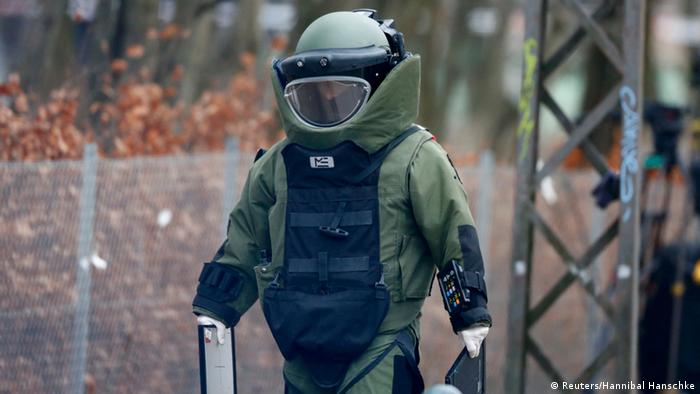 Specialist disposal experts for wartime bombs still scattered across Germany were back in action on Tuesday in Cologne.

The Rhine River metropolis was a major target of Allied bombers between 1942 and 1945. Whole districts were destroyed around the famous Cologne Cathedral, which remained standing but was damaged. 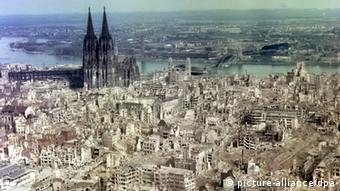 Cologne in 1945. Mülheim lies beyond the cathedral

The seven-decades-old bomb thought to be American was found last Friday near the city's Mülheim Bridge during river bank excavations for a communal heating pipeline. The device had lain undetected despite re-examination of wartime aerial photos.

Munitions disposal squad spokesman Wolfgang Wolf said the device, if it went off, had the potential to create a large atmospheric shock wave.

"We have here [explosive] TNT that generates shock waves over a wide distance that can rip off roofs, windows, doors and so on," said Wolf.

Evacuation orders on Wednesday applied on both sides of the river, including the densely populated districts of Mülheim and Riehl, a port precinct for inland shipping, on the opposite bank. 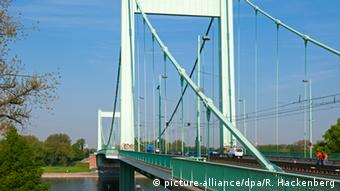 The city's public order office said one of its challenges was the evacuation of 1,100 residents from a senior citizens and nursing complex to alternative accommodation outside the danger zone.

Ambulances and special care were arranged for 600 of its frail residents.

"The scale presented us with a special problem because we had to evacuate so many people for whom we had to provide care," said office spokesman Heribeth Büth .

"Otherwise, it's like every other defusal operation," Büth said, referring to a similar evacuation in Cologne last Friday that involved 10,000 people.

During Wednesday's operation, disposal experts intended to lift the bomb out of the ground and then deactivate its fuse.

Beforehand, adjacent gas and water pipelines were to be emptied.

Last week, a 250-kilogram bomb was defused in Hanover during a nighttime operation that required the evacuation of 31,000 residents. That device had lain undetected for 70 years under school grounds.

Germany's largest bomb disposal took place in 2011 in Koblenz, where 45,000 people had to be evacuated while devices found on the riverbed during a drought were defused.

In Potsdam last December, a 250-kilogram device was defused after forcing a brief evacuation of the Brandenburg state parliament. The bomb originated from a British raid on Potsdam, near Berlin, on April 14, 1945.

Thousands of homes evacuated in Hanover after WWII bomb found

Authorities in Hanover evacuated some 31,000 residents from their homes on Tuesday evening after the discovery of an unexploded World War II bomb under a former school. The bomb was safely defused after midnight. (19.05.2015)

The discovery of three old, undetonated World War II bombs in the Rhine river led to the evacuation of around 45,000 citizens in the German city of Koblenz. The bombs have been successfully defused. (04.12.2011)