In a contest usually dominated by the old and tiny, this year's prize went to Martha, a young and bulky mastiff. The annual World's Ugliest Dog competition in Petaluma in the US aims to raise awareness for dog adoption.

Martha, just three years old, stole the hearts and hurt the eyes of the crowd in northern California on Friday as she plopped down on her side and drooped her long face across the floor when she should have been performing for the panel of judges. So convinced were the judges that they didn't even wait to hear her signature snore to give her the award.

Martha's win sees her owner, Shirley Zindler, walk away with $1,500 (1,340 euros), a shiny trophy and a trip to New York for media appearances for her and her pooch.

When Kerry Sanders of American TV network NBC News, one of the three judges, asked Martha, "Do you know you just won the World's Ugliest Dog Contest?" Zindler responded for her: "I'd gloat, but I need a nap." 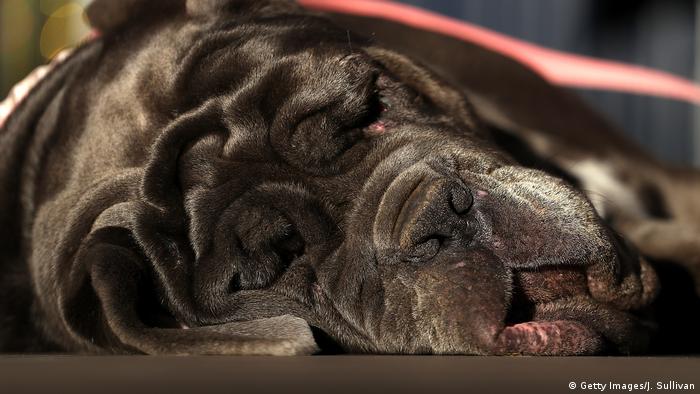 When the time came to perform for the panel, Martha instead plopped on her side and took a nap

The award isn't based on just looks, or lack thereof. Contestants are also judged on first impressions, unusual attributes, personality and audience reaction.

And while each canine contestant had its own unsightly features, all of them had heartwarming stories, from neglect and abandonment to disabilities and surgeries.

Martha was rescued by the Dogwood Animal Rescue Project in Sonoma County in California after nearly falling blind from neglect. It took several surgeries before she was able to see again, Zindler said.

Second prize is always presented to a dog and their owner who have overcome particularly difficult obstacles or who provide a special service to their community. This year, the award went to the competition's oldest participant, Moe, a 16-year-old Brussels Griffon-pug mix that had lost its sense of sight and hearing but maintained a superb sense of smell.

The competition also aims to find a home for abandoned dogs through a series of events that include a fashion show and red carpet walk.

Youth and bulk has taken the crown after a Neapolitan Mastiff called Martha won this year's World's Ugliest Dog award. The annual prize in Petaluma, California, aims to raise awareness for dog adoption. (24.06.2017)