Long before the Americans declared independence, centuries before Columbus discovered the new world and before Gutenberg invented movable type, Germans were already perfecting the art of making beer. 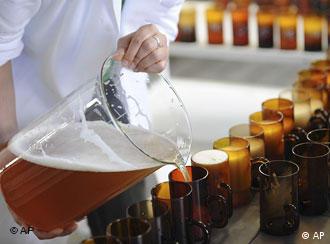 Weihenstephan hasn't changed much over the centuries

Even from a distance, the Weihenstephan brewery dominates the area. Perched atop Naehrberg Hill in Freising, a small town just north of Munich, the brewery was originally a Benedictine monastery founded in 740 AD by a monk named Korbinian.

It wasn't until the year 1040, when Abbott Arnold secured the brewing rights and license from a neighboring monastery, that beer was brewed there. Despite four fires, three plagues and a major earthquake, they have been brewing beer non-stop for nearly a thousand years.

Not only is Weihenstephan the oldest brewery in the world, it has a tradition of being a center for research about brewing and brewing technology. The entrance to the Technical University of Munich is located just across the courtyard from the brewery's offices.

The science of brewing 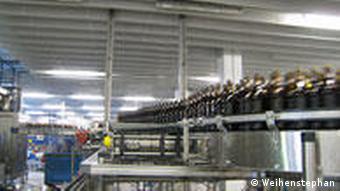 Modern techniques are used for an ancient art

The academic tradition started in 1852 when the State Agricultural College was relocated from the town of Schleissheim to Weihenstephan, and along with it came the Bavarian apprentice brewers. In 1895, the college was converted to an academy and in 1919 its status was elevated to a College of Higher Education for Agriculture and Brewing.

The institution became part of Munich's Technical University in 1930. Today, aspiring beer makers can prepare for many different types of careers in the brewing industry, though the two most popular academic disciplines are that of brew master and brew engineer.

Another bonus that derives from the proximity of the university to the brewery is that tour guides are often knowledgeable students. Cem Schwarz, one of the guides, has a special appreciation for the history of the brewery.

"The reason why Weihenstephan is called the oldest brewery in the world is because there is a document from the year 1040 that displays Weihenstephan," said Schwarz. "The making of beer is mentioned for the first time."

Deep in the bowels of the brewery, the physical layout has not changed much over the centuries. The vaulted rooms where the beer is made and stored still look the same as they did several hundred years ago. The only difference is that they are now all filled with stainless steel vats instead of wooden barrels and the process is computerized.

Getting ready for market 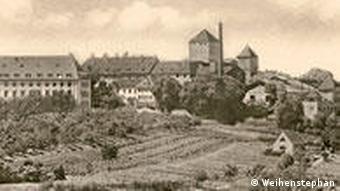 The tradition of beer-making at Weihenstephan is nearly 1,000 years old

Weihenstephan's wheat beer makes up about 88 percent of the brewery's total output. All in all, 12 different types of beer are on offer, including a dark beer, a pilsner, a seasonal lager and an alcohol-free version. The capacity at Weihenstephan is about 230,000 hectoliters, (around 6 million gallons).

"Compared to American standards, it is a small brewery I think," said Schwarz. In contrast, the Budweiser brewery produces 1.2 million hectoliters (31 million gallons) of beer a year at the St. Louis plant alone, with 11 additional breweries around the US.

In Germany, most beer bottles are recycled and re-used. The bottling process is fairly straightforward: First, crates of beer, each holding 20 empty bottles are brought in by the truckload. Then a machine grabs all 20 bottles from a crate and places them on a conveyor belt.

Since many beer bottles in Germany are similar in size and shape, an employee has to inspect the bottles by hand to ensure they are all from Weihenstephan. In the next step, the bottles are moved into a giant dishwasher where they are heated and cleaned. The old labels are removed and the bottles are washed again before they continue on to the refilling station. 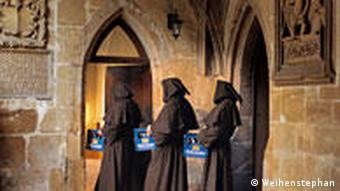 Monks were the first to brew beer

Weihenstephan is not only a destination for beer lovers, it also attracts professionals from around the world who come to see the brewing techniques. One such guest was David Sipes, senior brew master for the makers of Samuel Adams beer in Boston. He said he appreciates the historical aspect of the brewery but also respects the mix of academia and practice.

"The university here is one of the world-renowned places for brewing science education and leads the way for a lot of research," said Sipes.

One of the unique aspects of brewing beer in Germany is the country's purity law, or Rheinheitsgebot.

Lukas Balka, director of the Okoberfest Museum in Munich, explained that, several hundred years ago, people just collected berries, herbs and whatever they could find and made beer from it. But in 1487, the components were officially prescribed.

"When you brew beer you are only allowed to add three ingredients and that's water, malt and hops," said Bulka. "Of course you need the yeast for the fermentation process but those are the only ingredients, and we still brew under this Reinheitsgebot."

A new study shows that almost all of Germany's 16 largest breweries sold less beer in the first quarter of this year, reflecting a steady decline in beer consumption in the country. (17.07.2009)

Even though Anheuser-Busch lost its trademark battle with the EU against a Czech rival on Wednesday, it still retains the right to market the suds under the "Budweiser" name in individual European nations. (25.03.2009)