World′s Oldest Art Uncovered in Germany | Germany | News and in-depth reporting from Berlin and beyond | DW | 19.12.2003

Archeologists working on a dig in the southern German province of Swabia have unearthed what they claim to be the oldest statue in the history of art. 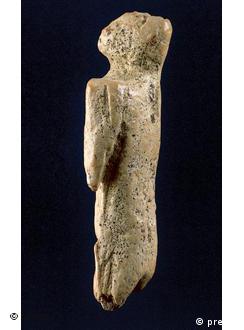 The three little figurines carved from mammoth bone were discovered in a cave in Southern Germany, and are so intricate in their design that archeologists believe they could change our understanding of the imaginative power of early man's mind. The artifacts date back between 30,000 and 33,000 years, to a time when some of modern humans' earliest relatives populated the European continent. 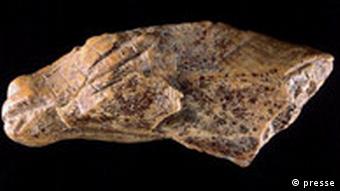 The incredible discovery was made during a dig headed by U.S. archeologist and Professor at Germany's University of Tübingen, Nicholas Conard. He believes the figures -- at most 5cm high -- depicting a lion-man, a water bird and a horse are the oldest examples of human art ever found. His view is shared by Anthony Sinclair, an archeologist at the University of Liverpool, who told the Nature journal that the find were doubtless the oldest corpus of figurative art in the world.

Conard's historic find at the Hohle Fels cave near the city of Ulm is not the first of its kind in Germany's Donautal region. This latest discovery brings the total of such finds at four locations in the area to more than 20.

It had previously been believed that similar ivory figures of lions and horses discovered in Vogelherd in 1939 were the oldest figurative art in the world, but Conard is certain that these ones are older because they were uncovered at a lower level in the cave floor sediment. Ever since the discovery last century, archeologists have been pondering the inspiration for the carvings. Some researchers believe the figures are indicative of a respect for the natural world and that early man might have been drawn to the animals depicted because of their power.

But the discovery of the water bird has dashed that particular theory and archeologists are now being forced to reconsider the motivation for the miniature sculptures. Conard told Nature he believes his historic find is proof that the ancient artists at the four different sites belonged to the same group and shared the same beliefs. He goes further to suggest that the artifacts are evidence of prehistoric shamanism.

The idea of early shamanism was first mooted by renowned South African archeologist, David Lewis-Williams. He believes that in primitive societies people in need of help would contact the spirit world through shamans, who had the unique ability to enter a trance and solve problems from the 'other side'. Conard says that early cultures might have viewed diving water birds as creatures which could move between the real world and the spirit world and described the finding at Hohle Fels as "the icing on the cake" for supporters of Lewis-Williams' theory.

The fine art of prehistoric sculpture

Whatever the meaning behind the little carvings, there's no doubt that they are too intricate to fit with existing theories about the gradual evolution of art, which suggest it began in bluntly and has become honed to sophistication over the course of thousands and thousands of years.

Conard, who has studied human migration from Africa at dig sites from Syria to Germany, believes that humans first arrived in central Europe by following the River Danube west into the area. Fossil remains suggest that both modern humans and Neanderthals lived in Europe during this period, which makes it difficult to say for sure which group was the creative talent behind the carvings.

The cultural history of the Rhine River region is the focus of a reconceived museum that opens in Bonn this weekend.(23 November 2003)