World War One: Mustard gas canisters still scattered throughout Flanders | Europe | News and current affairs from around the continent | DW | 22.04.2015

A hundred years ago the German army became the first to use chemical weapons in World War One. Remnants can still be found today, as a Belgian hobby archaeologist recently found firsthand. 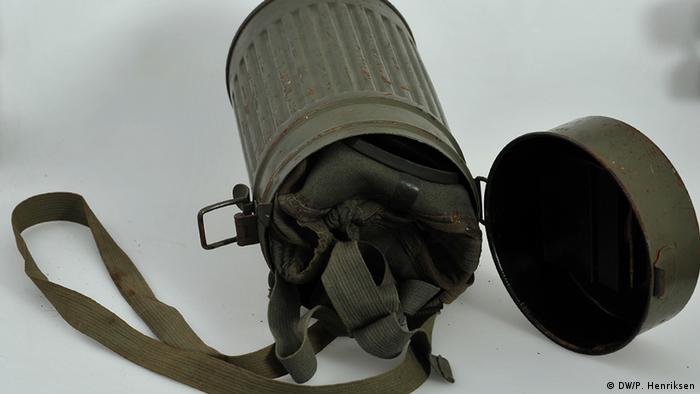 Patrick van Wanzeele can roughly imagine what soldiers in the trenches went through 100 years ago. "It burned, and I had a temperature of 105 degrees. I knew that I wasn't feeling well," the hobby archaeologist says, recounting the incident from a few years ago, when dug up a canister on an old battlefield and inadvertently inhaled a small amount of mustard gas. "I leaned the projectile against a tree, and held it for about three minutes. Then my hand turned bright red, and I had to go to hospital. The gas burnt me," says van Wanzeele. "I had health problems for the next two years, but luckily I survived."

'It was much worse'

For years, van Wanzeele has been excavating World War One trenches near the city of Ypres in northwestern Flanders with a group of ten "diggers," as his team like to call themselves. Since 1980, they have found hundreds of projectiles and weapons, an entire trench network, even corpses. He hands over the ordnance and remains of the fallen to the Belgian police.

His "excavation" group has received medals of appreciation from some of the nations for which the soldiers once fought. However, unsupervised excavation is now forbidden in Belgium due to the potential danger presented by rotting munitions. 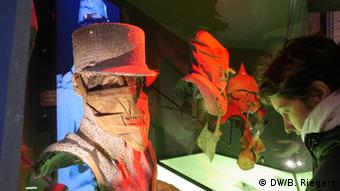 Through his work in the fields of Flanders, van Wanzeele has an idea of how things might have looked 100 years ago in World War One trenches, inhabited by Allied and German forces. "It certainly wasn't like it appears in films, it was much worse. In 1915, the mud in the trenches was this deep, about three feet," he says as he holds his hand above his waist. "Soldiers sometimes had to sit in the mud for three days and three nights, because they were being shelled. It was terrible. We found English and German dead, buried deep beneath the mud."

Today one can find military cemeteries in every tiny village in Flanders. New cemeteries and memorials were even opened for the 100th anniversary of the beginning of the war. Near the village of Langemark, an oversized bust of a soldier atop a 20 foot marble column recalls the victims of the first German gas attack on April 22, 1915.

Van Wanzeele is especially interested in the fate of World War One soldiers because his grandfather fought in the trenches. "When he came back from the war he never talked about what he had experienced. He never talked, he preferred to drink."

Through his findings, van Wanzeele has attempted to reconstruct the suffering of the soldiers. "Dead. Dead. Dead everywhere. That's what it looked like here in 1917. We found legs, arms, ribs, thousands of bones. It was awful." Van Wanzeele has turned his house into a small museum; the living room is full of shell casings, and the shelves are full of photo albums and documentation from his excavations. He gave his best finds to the "In Flanders' Fields" museum in Ypres, where they can be seen in a new permanent exhibition about the war.

Historian Pieter Trogh works in the museum, is housed in the reconstructed cloth hall on Ypres' market square. Standing in front of a glass display case containing gas canisters that the Germans used to release chlorine gas in April 1915, Trogh explains the first attack: "There were two French divisions there. They had no idea what was about to hit them. They had absolutely no way to defend themselves against the gas cloud. Many of them were asphyxiated immediately. Others were able to run away, only to die of poisoning later. As far as we can tell, about 1,150 French soldiers died on the first day." 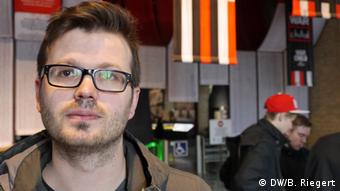 Historian Pieter Trogh works at the museum in Ypres

In the beginning, gas could only be used in favorable winds, otherwise the Germans would have been poisoned as well. But such propitious winds only blew a few days a month in Flanders. In the end, the new weapon failed to truly influence the course of the war, and German troops were unable to gain much ground. "The idea behind the weapon was to provide a breakthrough, but nothing had changed by the time the hard fought second battle of Ypres came to a close. In the end, weaponized gas was a failure."

For their own part, the Allies later also developed chemical weapons that were shot with shells. British troops on the French front fired the deadly gas phosgene for the first time on September 25, 1915. "From then on gas was used like every other conventional weapon. It brought no great change, but locally it could weaken the enemy. Gas became an important psychological weapon, one that was used to grind down the adversary," explains historian Pieter Trogh.

The armies soon developed gas masks, which were initially made of cloth, then of leather, then rubber, but in most cases the soldiers, and especially the civilian population were utterly defenseless against the chemicals. Trogh explains that soldiers who fled the trenches to escape approaching gas clouds were punished as deserters.

"A number of soldiers who fled the gas attacks were later court-martialed and then summarily executed. This was intended to force troops to maintain their positions, even though there was absolutely no defense against such gas attacks." Van Wanzeele says that he found a lot of empty rum bottles in the trenches that he excavated. "They drank courage when they had nothing else." 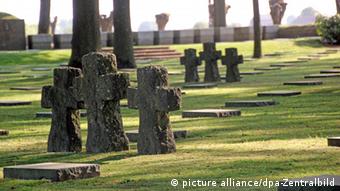 There are several war cemeteries around Ypres

Internationally ostracized, but still not gone

Weaponized gas was first forbidden in 1899, in the Hague Convention respecting the Laws and Customs of War on Land. Yet that hindered neither the Germans, the French, nor the British from secretly developing chemical weapons. On the German side, Fritz Haber was responsible for their development. The chemistry professor and army captain became the "Father of Chemical Warfare," and was awarded the Nobel Prize for Chemistry, albeit for his work on synthetic fertilizer. The use of chemical weapons was once again outlawed through international treaties in 1925.

During the Second World War all sides possessed large stockpiles of chemical weapons, but refrained from using them. It was not until passage of the 1997 Chemical Weapons Convention that chemical weapons became wholly ostracized internationally. Iraqi dictator Saddam Hussein used chemical weapons against Iranian forces on a large scale in 1980, at the start of the Iran-Iraq War, and once more against Kurdish civilians in 1988. Chemical weapons were also used in the Syrian civil war, a fact confirmed by the United Nations. It is a point of contention as to who was responsible for their use, but the West considers Syrian president Bashar al-Assad to be the guilty party.

A hundred years after their first use in wartime Flanders, chemical weapons have yet to be completely removed from its battlefields. A century later one still finds their remnants lying around Belgium. As Trogh says, "They are still there; when foundations are dug on building sites they always find gas canisters. Then a special unit of the Belgian army has to be called in to secure the munitions."

A former Waffen-SS soldier who worked at the Auschwitz concentration camp has said he did not spend much time working the "ramp." His trial is likely to be one of the last of former workers from the camp. (22.04.2015)

The European Parliament is due to vote on a resolution defining the deaths of Armenians in World War I as "genocide." But Turkish President Erdogan has said the words would "go in one ear and out the other" in Ankara. (15.04.2015)

Exactly 100 years since German and British troops laid down their weapons to play football together, soldiers from both countries have commemorated the event with a match in Kabul. The friendly ended 3-0 to the British. (24.12.2014)

Always a somber occasion, this year's commemorations of the brutal conflict were observed across the Continent in a lonely atmosphere. COVID-19 restrictions kept the public away with only small ceremonies.