World War I: The 'Black Army' that marched in from Africa

Two million Africans were killed when the continent was drawn into the conflagration of World War I. The war and its aftermath wrought seismic changes in Africa that remain at the root of conflicts in many countries. 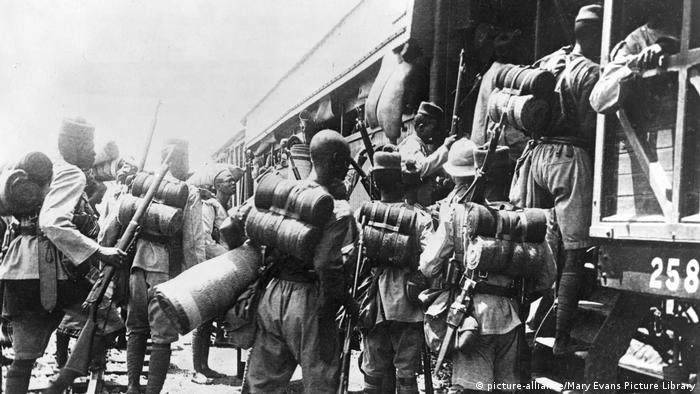 With World War I raging in Europe, African soldiers were forced to fight for their colonial masters between 1914 and 1918. France recruited more Africans than any other colonial power, sending 450,000 troops from West and North Africa to fight against the Germans on the front lines.

As part of its events to mark the centenary of WWI on Sunday, the presidents of France and Mali inaugurated a new monument in the city of Reims, northeast of Paris, to the so-called "Black Army" — West African soldiers from France's former colonies.

Read more:  Listen to the battlefield as World War I guns fell silent 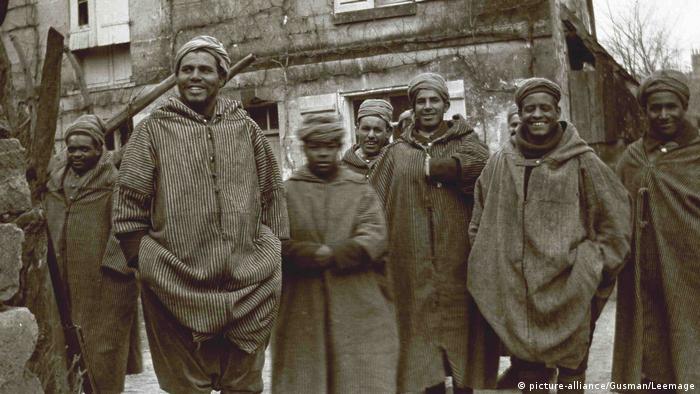 During the war, around 30,000 Africans died fighting on the side of France alone. As France and Mali remembered those African troops on Tuesday, French President Emmanuel Macron paid tribute on Twitter to the "200,000 African soldiers from the colonies" who were among "the youth of the whole world who fell 100 years ago in villages whose names they did not know."

"Today, we honor our heroes," said Malian President Ibrahim Boubacar Keita, speaking at the inauguration of the monument. Keita's great-grandfather reportedly died in 1916 at the Battle of Verdun in northeast France.

Read more: Witness to history: A POW in France

Clemence Kouame, an African student at the ceremony, told DW that "it hurts" to think about Africa's involvement in the war.

"People from Senegal, Ivory Coast and Mali died for France. It's true that France colonized them, but it wasn't their choice. You could almost say they died for nothing, at least not for their countries," she said.

The original monument to the "Black Army," set up in Reims in the 1920s, was removed by the Nazis during World War II and never resurfaced.

During the war, African troops were also deployed in Africa itself. A Senegalese infantry helped France seize the German colony of Togo, and the British also fought alongside African troops against the Germans until 1918. Africans served as scouts, porters and cooks.

Germany also exploited Africa, forcing thousands of Africans into military service in Tanzania — the former German East Africa. That meant labor shortages in the fields, which led to widespread starvation. The economy ultimately collapsed and around 1 million people died in East Africa as a result.

WWI would ultimately redraw Africa's borders. Germany's defeat meant the loss of its colonies, with German East Africa, German Cameroon, Togo and German South West Africa all taken over by the victors.

In Cameroon, the former colony was divided between Britain and France, with the French getting more than four-fifths of the land. After the end of colonial rule in 1960, the divided country was reunified, but by no means peacefully. The country's English-speaking minority, which felt abandoned by the central government, is still fighting for its own homeland today.

100 years after World War I

A second war before decolonization

Namibia, once German South West Africa, was not divided but placed under the control of the League of Nations, the forerunner to the United Nations. An independent country was supposed to emerge with the help of South Africa.

But the South African government had other ideas and seized control just two years after the end of the war. South Africa imposed its apartheid regime and oppressed the black population until Namibia's independence in 1990.

WWI resulted in seismic changes that are still at the root of conflicts in many African countries today. For many Africans, the end of WWI did not bring hope for liberation. Decades would pass and another world war would be fought before the decolonization of Africa could finally be celebrated.

This article is based on a DW TV report by Max Hofmann.

World War I ended on November 11, 1918. The conflict claimed countless victims with unprecedented displays of power. But the human suffering continued as Europe could not fully recover from the disaster. (01.09.2018)

Macron pays tribute to Africans who fought for France