The WTO meeting in Nairobi has failed to make much-needed progress on global trade barriers. However, members of the international trade organization did reach a deal on farm subsidies. 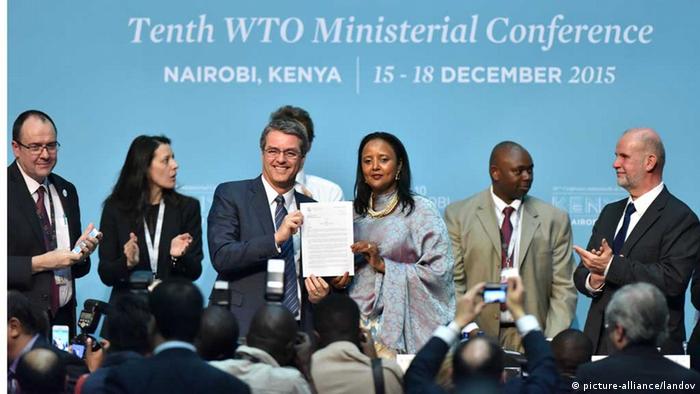 The World Trade Organization (WTO)'s five-day meeting in Nairobi came to a modestly successful conclusion on Saturday, as the 162-member body managed to reach a deal on farm export subsidies but failed to make progress on other much-needed reforms.

Trade officials touted the WTO's decision to abolish agricultural export subsidies, which leaders said would allow developing countries to better integrate themselves into the global market. US Trade Representative Michael Froman went so far as to call the move "a turning point for the World Trade Organization."

The organization's director general, Roberto Azvedo, also praised the outcome of the meeting, calling the farm export decision the "most significant outcome on agriculture" in the WTO's history.

Still a ways to go

Despite leaders' gushing praise for the decision on farm export subsidies, the meeting still failed to make much progress on the long-stalled Doha negotiations.

Those talks, which began in the Qatari capital in 2001, were meant to help poor and developing countries compete in the global market. However, industrialized countries have failed to reach an agreement on cuts to tariffs and agricultural subsidies.

This week's meeting was no different, with the 160 members split over whether to continue with the Doha negotiations or abandon them.

Richard Baldwin, a professor of international economics at the Graduate Institute of Geneva, summed up the feeling via Twitter.

The WTO's declaration at the end of the Nairobi meeting said members remained committed to completing the Doha negotiations. However, it also said that some members were calling for the talks to be modified or scrapped.

African leaders push for WTO pact but experts are skeptical

Mixed expectations and goals are emerging as the WTO opens its first ministerial conference in Africa in the Kenyan capital Nairobi. African ministers are pushing for major changes to benefit developing countries. (15.12.2015)

A rift between industrialized and emerging economies on how to liberalize global trade is set to dominate a World Trade Organization meeting in Nairobi, with some urging the WTO to abandon talks and start fresh. (15.12.2015)