Following a sensational discovery of a score in Düsseldorf, a piece just had its first-ever performance. For members of a family that suffered under the Nazis, it was a moment of joy and satisfaction. 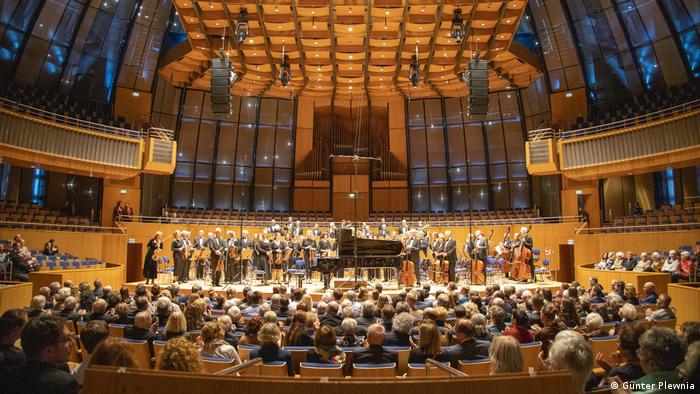 Lust for life and lightness from the Roaring '20s: One is reminded of George Gershwin's whimsical turns of musical phrase.

Gentle, impressionistic sounds are interrupted by hammering piano runs. In the full-sized orchestra, motifs are introduced, varied and then move from the bass clarinet to the double bass or from the timpani to the piano. Sudden orchestral eruptions are interspersed with fugatos demonstrating the composer's sophisticated technique. After many changes of mood and style — and moments that recall film music — it all culminates in a sweeping finale.

"For me, it was a very emotional thing," Gilbert von Studnitz explained. "To listen to such an energetic program and to know that it was my grandfather who composed it: I started misting up listening to that." The grandson of composer Theo Kreiten traveled from his home near San Francisco to Düsseldorf for the world premiere of the Fantasy for Piano and Orchestra — 91 years after it was written. 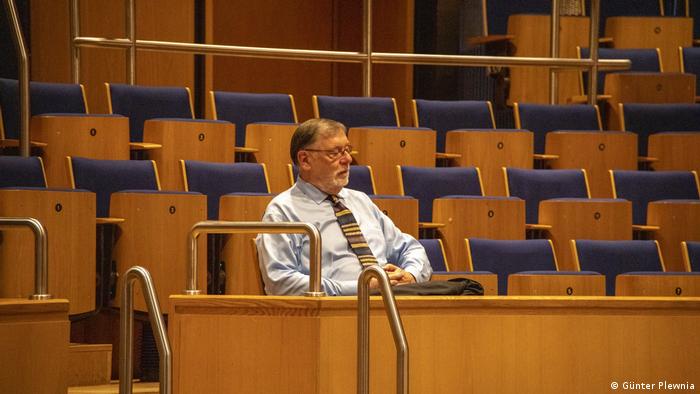 Experiencing music for the first time

To hear a work of composed music for the very first time is a rare experience, all the more so if that music breathes the spirit of a different era. Listeners in the Düsseldorf Tonhalle on September 28 had that opportunity, listening to a performance by the Orchestra of the State Government of Düsseldorf (OdL). The conductor was Christian Ludwig, and the soloist: Philipp Scheucher, winner of the Karlrobert Kreiten Piano Competition in Cologne.

Karlrobert Kreiten? Weren't we just talking about Theo Kreiten? The story gets more complicated: Karlrobert, the composer's son, was one of the most talented young pianists of the day. For criticizing the Nazi regime, he was denounced, turned over to the Gestapo and executed, at 27 years old, on September 7, 1943, in the Plötzensee jail in Berlin. 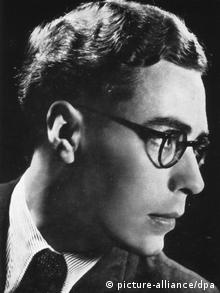 That story in itself made the performance of his father's Fantasy an emotional experience, revealed Heike Lindner to DW. A professor of religious education at the University of Cologne, Lindner is also second violin chair in the amateur orchestra.

"After talking with the composer's grandson and learning about the background to the situation of artists during the Weimar Republic and afterward, we played very differently."

A piece of music on hidden pathways

Düsseldorf composer, pianist and professor Theo Kreiten, born in 1887, had performed a two-movement piano concerto of his own in the Düsseldorf Tonhalle in 1928. A music critic later advised him to shorten the first movement. The composer took the advice to heart and went even further, eliminating the movement altogether and reworking the second movement into the aforementioned Fantasy.

That was the end of the story — till now. Last year, while taking inventory of the OdL's stocks of sheet music, Bianca Petzinka, violinist and member of the orchestra's steering committee, happened across a score bound in red. Musicologists at the Academy of Music and Dance in Cologne were able to identify it as the Fantasy, long believed lost. 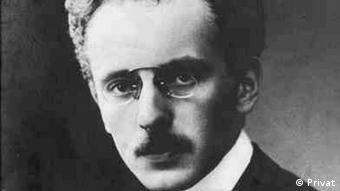 Theo Kreiten's music swings — yet is multi-faceted and multi-layered

"The score was in very good condition, spotless — as though it had never been used but simply closed after having been written at the desk," says Lindner. "The work was virtually ready for performance. All that needed to be done was to copy out the notes for the instruments."

How the score ended up in the orchestra's stocks is unknown.

A composer broken by sadness

On the evening before the concert on September 28, a memorial in honor of Theo and Karlrobert Kreiten was unveiled in Düsseldorf's south cemetery. Streets in Düsseldorf, Cologne and Bonn have already been named after the pianist, as has the above-mentioned piano competition at the Cologne Music Academy. 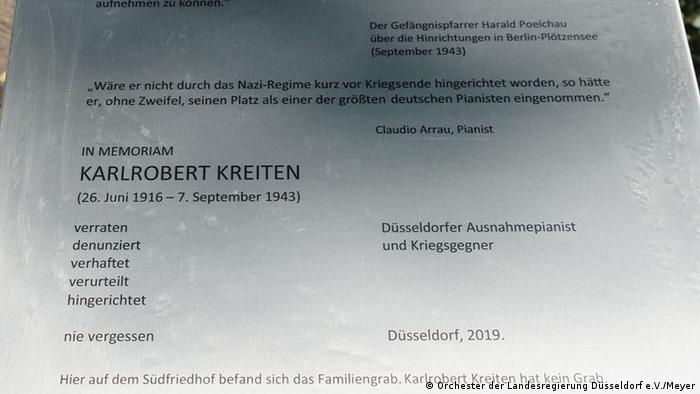 So it was the spirit of Karlrobert Kreiten that seemed to hover over his father's music too. Karlrobert's mistake? In private, he'd expressed doubts about Germany's chances of winning World War II.

Did a few ill-considered words suffice for capital punishment in the Nazi regime? It's known that the regime's terror could take on bizarre and extreme forms, but it's also known that Karlrobert Kreiten had contacts to anti-fascist groups and was probably already on the Gestapo's radar for that reason.

"These groups influenced his thinking," says Gilbert von Studnitz. "He didn't want to get involved in politics. But in those days you couldn't be not involved. So he voiced his opinions — to the wrong person — and we know the result.

Once a student of the famous pianist Claudio Arrau, Karlrobert Kreiten had influential friends. But even the intervention of the equally famous conductor Wilhelm Furtwängler couldn't prevent his arrest and execution. 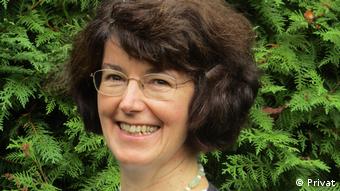 For Heike Lindner, hearing the work come to life was a spine-tingling experience

"A member of our orchestra later told us that he knew Emmy Kreiten, Karlrobert's mother," says Heike Lindner. "She had shown the musicians an invoice from the Plötzensee prison: She actually had to pay the prison fees, even for the rope used to hang her son. Everything itemized in reichmarks, line by line, down to the last cent. Hearing that makes you queasy."

Because family members of an executed "traitor" couldn't be safe from regime terror, Theo and Emmy Kreiten and their daughter Rosemarie emigrated to Alsace, returning to Düsseldorf after war's end.

In 1947 the book Wen die Götter lieben – Erinnerungen an Karlrobert Kreiten (Loved by the Gods — Memories of Karlrobert Kreiten) was published, written by Theo Kreiten, whose health had declined after his son's death. Before long, Theo was blind.

Rosemarie von Studnitz, née Kreiten, and her three-year-old son Gilbert emigrated to the US in 1954. Theo Kreiten died in 1960 in Düsseldorf.

Joy in living — and the will to live

The circle closes. Before the concert in Düsseldorf, Gilbert von Studnitz ceremoniously turned over his grandfather's score to the city government. The OdL will record the work and make a CD. Should a publisher be interested in it, it can be shared by other pianists, orchestras and audiences.

It would be worth it. Theo Kreiten's Fantasy for Piano and Orchestra is bursting with the zeitgeist of the 1920s, a time of innocence between the world wars when hardly anyone could imagine the coming catastrophe. 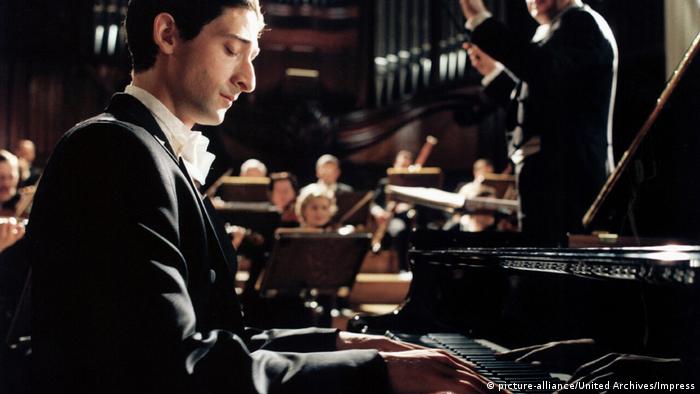 Adrien Brody as Wladyslaw Szpilman in The Pianist

Another poignant moment: Innocence and lust for life also radiate from another work performed on September 28 at the Düsseldorf Tonhalle: the Concertino for Piano and Orchestra by Wladyslaw Szpilman, with soloist Valere Burnon.

No one who has seen the film The Pianist will forget the protagonist Szpilman, a Jewish pianist and composer who only narrowly survived the Holocaust and wrote his Concertino in the Warsaw Ghetto — under much worse conditions than those experienced by Theo Kreiten during the Weimar Republic. Incomprehensibly, that work, too, exudes joy.

Maybe the will to live is the strongest human impulse of all.

He was the grandson of composer Richard Wagner and like a stepson to Adolf Hitler. Wieland Wagner, credited with revitalizing the Bayreuth Festival after World War II, would have turned 100 this year. (27.07.2017)