Representatives of over 170 countries have signed the Paris climate deal in New York. By signing the four-month-old agreement, the nations pledged to join the fight against global warming. 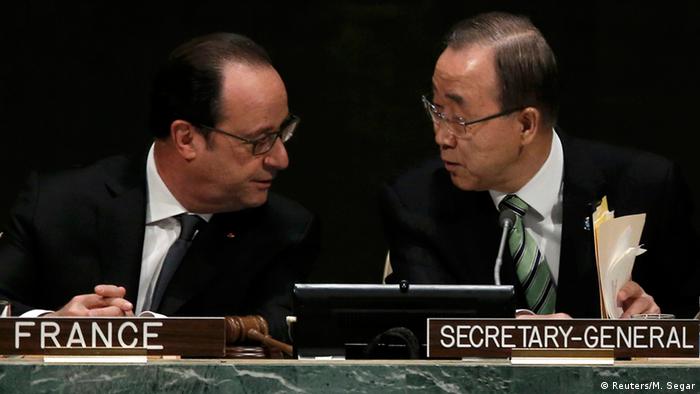 UN chief Ban Ki-moon opened the ceremony on Friday, describing the accord as "history in the making" in his address to the UN General Assembly.

Envoys from more than 170 countries signed the climate deal over the course of the day, setting a new record.

"Today you are signing a new covenant with the future," Ban told the gathering on Friday. "The era of consumption without consequences is over."

For Germany, Environment Minister Barbara Hendricks was on hand to sign the commitment, which will then require ratification in parliament.

Famous Hollywood actor Leonardo DiCaprio also addressed the international officials, telling them they were the "last best hope" for saving the planet.

"We can congratulate each other today, but it will mean absolutely nothing" if the envoys fail to implement the deal, DiCaprio said.

Despite Friday's signing ceremony, most individual countries are still obliged to ratify the agreement in their own parliaments.

In New York, French President Francois Hollande said he would urge his parliament to ratify the accord "by the summer" of 2016. Hollande also called on the EU to "lead by example" and complete the procedure before the year is up.

"There is no turning back now," he said in a brief address to the assembly.

The agreement is set to come into force after 55 countries representing at least 55 percent of global polluters formally join it. International leaders have set 2020 as the target date, but many climate experts believe it could happen much sooner.

On Friday, Beijing's representatives announced China would ratify the deal by September. The US also intends to finalize the procedure during this presidential election year.

Brazilian President Dilma Rousseff also spoke before the assembly in New York, pledging that her country would restore and reforest 12 million hectares (30 million acres) of forests and 15 million hectares of degraded pastures, but offering no timetable.

In her speech, Rousseff also addressed the deep domestic crisis in Brazil, which could see her impeached for allegedly breaking fiscal laws.

The country was in a "grave, serious moment," she said.

"Brazil is a great country without a doubt, with a society that was able to overcome authoritarianism in the past and build a vibrant democracy," she said. "I have no doubt that our people will be capable of preventing any setbacks."

Countries are obliged to report on their progress and update their targets every five years. However, there is no penalty if the states miss their emission goals. A nation can also withdraw from the treaty, but not during the first three years after the deal goes into effect. After deciding to pull out, the national government would need to wait for a one-year notice period.