The current Ebola outbreak has now killed 1,350 people and counting. Residents are clashing with police officers who have cordoned off Monrovia's West Point district and its estimated 75,000 people. 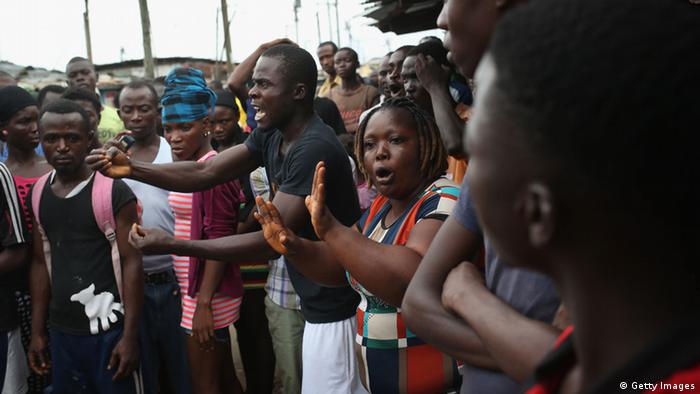 The total number of Ebola deaths spiked to 1,350 Wednesday, with the toll mounting fastest in Liberia, which now has at least 576 confirmed dead of the virus, the World Health Organization (WHO) reported.

On Wednesday, the UN health agency also warned that "countries are beginning to experience supply shortages, including fuel, food, and basic supplies."

Ebola virus is transmitted through blood and other fluids, and nearly 2,500 people have received diagnoses in Liberia, Guinea, Sierra Leone and Nigeria since the outbreak began in February. WHO reported encouraging signs that the outbreak had slowed in Guinea and that Nigeria had managed to contain the disease to about a dozen cases, with just five deaths so far.

Liberian President Ellen Johnson Sirleaf has ordered areas of Monrovia quarantined (pictured). The lockdown of the neighborhoods follows reports of dead bodies being dumped on the streets of the capital. In addition, many Liberians continued to doubt the existence of Ebola and disregarded prevention measures, Johnson Sirleaf said.

"It has become necessary to impose additional sanctions to curb the spread overall and particularly in those areas of intensity," Johnson Sirleaf said on Tuesday. "We have been unable to control the spread due to continued denials, cultural burying practices, disregard for the advice of health workers and disrespect for the warnings by the government," she added.

Up to 30,000 people would have required Ebola drugs in the current outbreak by now, according to a scientific attempt to quantify demand for a treatment and vaccine published Wednesday in the journal Nature. No approved drugs exist to treat the virus, though several remain under development. Last week, WHO gave the green light for experimental medicines to fight Ebola.

"This demand is likely to be higher than many people realize," University of Oxford epidemiologist Oliver Brady wrote in the Nature article, intended to help drug manufacturers and regulators determine potential demand. "For example, our analysis suggests that, even under a conservative scenario, up to 30,000 people would have so far required treatment or prophylaxis in the current outbreak." Brady called that "substantially more" than for any of the 22 other Ebola outbreaks that have occurred since scientists discovered and named the virus in 1976.